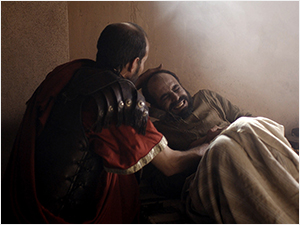 Share your thoughts below, or tweet about it with the #boundlessbible hashtag. Don't forget this week's Children's Challenge!

Going Deeper –  from 'Words of Life'

According to the timing in the other Gospels, Jesus had already met Simon Peter and Andrew, and they had responded to Jesus’ call to follow him (John 1:35-42). But soon after, they returned to their occupation of fishing. However, the time had now come for them to be trained – in order to carry on God’s work effectively.

One day, when people were crowding around Jesus, he saw Simon Peter’s fishing boat. He got in and Simon pushed it out from shore. Then he told Simon to go out further and let down his nets for a catch. Simon relayed to Jesus that they’d been out all night and had caught nothing.

However, he said to Jesus: ‘Yet if you say so…’ (5:5 NRSV). Simon had great faith in Christ. They then caught so many fish that the nets almost broke.

The faith of a fisherman!

A little later, in Capernaum, a centurion’s servant became seriously ill. The centurion had been particularly helpful toward the Jews, even building a synagogue for their worship (7:5). He sent some elders of the Jews to Jesus, believing Jesus could heal his servant. Jesus responded to the request, but before he reached the man’s home the centurion sent another message:

Such was the faith of a centurion!

How is our  faith today? Just as there were many ‘fish’ waiting to be caught in the lake of Gennesaret, today there are many people – young and old – waiting to be told of Jesus’ saving grace. Simon Peter was told by Jesus he would be a fisher of men and women, boys and girls. He tells us this as well.

We need the faith of a fisherman. Do we have it?

We also need the faith of a centurion: that whatever we’re facing, God is with us – every day, every step of the way. Do we believe it?