Men in Black: Speaking About how to Collaborate with Women in the fight for Justice for Women and Girls 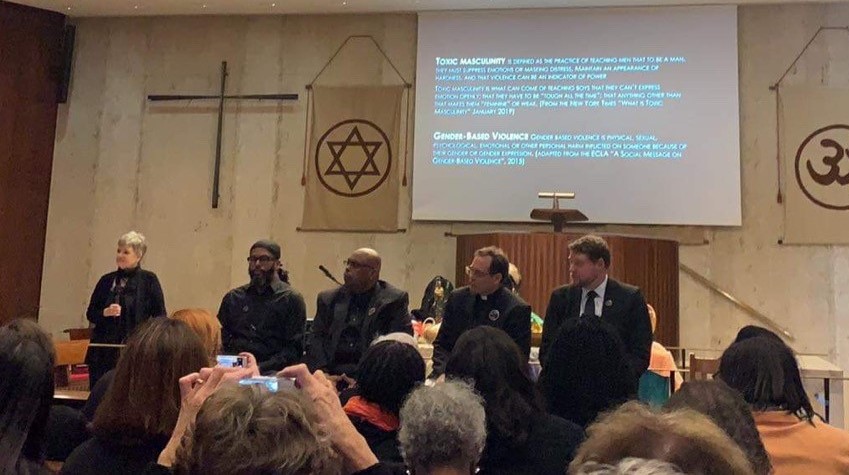 Toxic Masculinity – is defined as the practice of teaching men that to be a man, they must supress emotions or mask distress, maintain an appearance of hardness, and that violence can be an indicator of power.

Toxic masculinity is what can come from teaching boys that they can’t express emotion openly, that they have to be tough all the time, that anything other than that makes them feminine or weak (from the New York Times ‘What is Toxic Masculinity’, January 2019)

Gender Based Violence – physical, sexual, psychological, emotional or other personal harm inflicted on someone because of their gender or gender expression (adapted from the Evangelical Lutheran Church Association ‘A Social Message on Gender Based Violence’, 2015)

Toxic masculinity, if not addressed, ends up in violence towards women and girls.

The meeting opened by women standing up and reading aloud some situations many women around the world find themselves in every day. After they were read, the audience was asked to raise their hand if they had experienced one of these situations personally, or if they knew a woman who had. Every hand was raised. The scenarios read included:

A panel of four men spoke on what toxic masculinity has or does look like in their life and work? They shared personal stories which were asked not to be reported on. However, the following points were made.

How do you resist and transform toxic masculinity?

What does it mean to stand together as we do the work? What do we need from one another?

The Salvation Army has a long history of giving women spaces to sand up, for empowering them and giving them a voice. However, we need to be sure that we are also speaking out against and condemning toxic masculinity, within our own organisation, in our church families and in our communities. It is not enough to just let women have a voice, we need to make sure our boys are being raised to be men who are not afraid to express fears and emotions, who see women and girls as equals and who stand up and fight for the women in their lives. We need to find ways to help ensure that men are not, even subconsciously, viewing women as inferior. We have the power within The Salvation Army to be able to be leaders in communities and model men who display positive masculinity which reflects the character of God. We have the opportunity to create safe spaces for both men and women to speak freely. This is an issue we need to speak openly about within our corps, at youth councils and character building programmes.