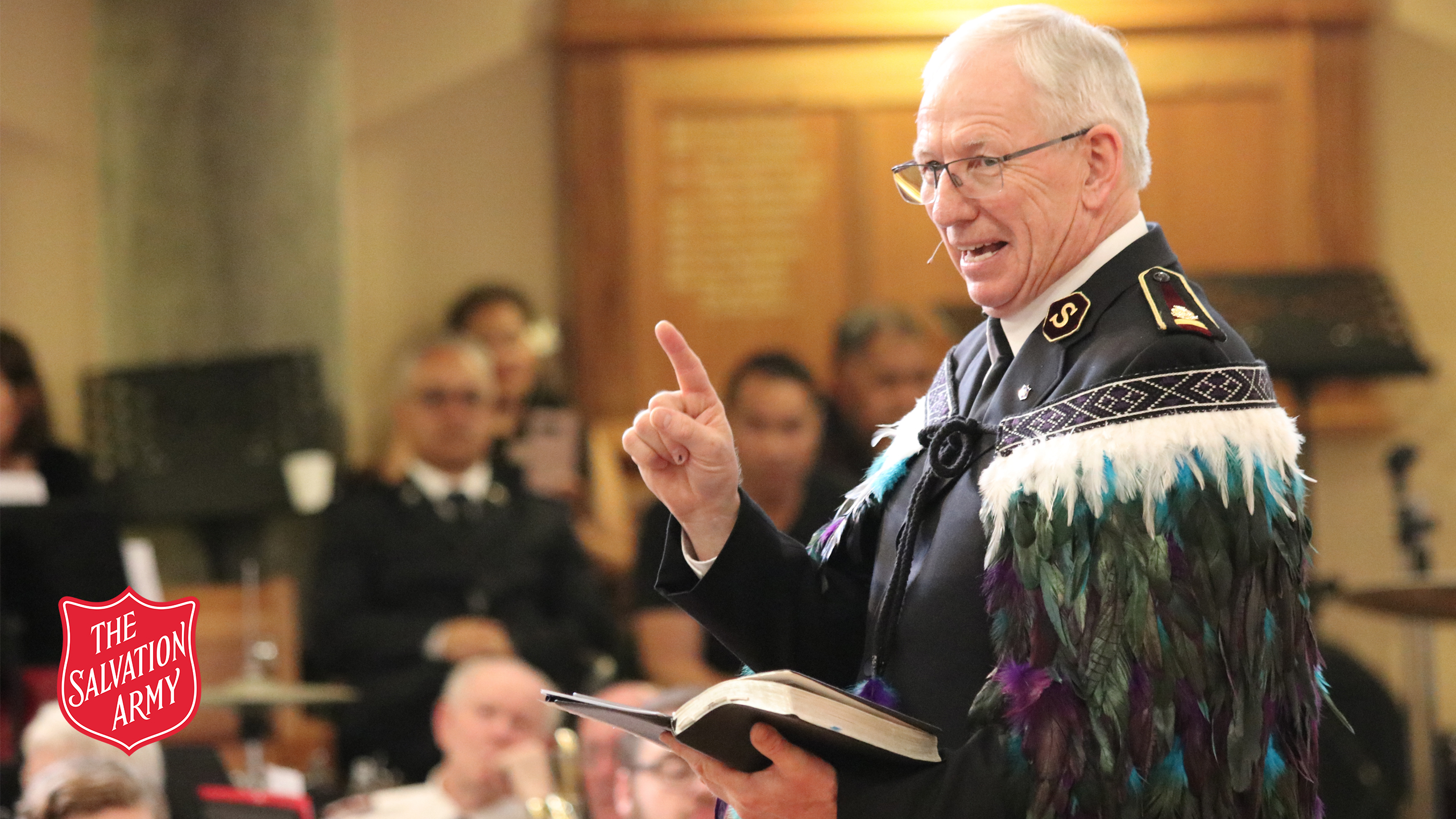 GENERAL Brian Peddle and Commissioner Rosalie Peddle (World President of Women’s Ministries) touched down in Wellington, New Zealand, for a short but significant weekend of ministry that included commissioning celebrations and the retirement of the leaders of the New Zealand, Fiji, Tonga and Samoa Territory.

The Silver Star service – recognising the part played by cadets’ parents and people who had played an influential role in their spiritual development – was held at Booth College of Mission over a Saturday morning brunch. Commissioner Peddle spoke from her own experience of being a recipient of the Silver Star and what it meant to see her child serving God wholeheartedly as an officer.

On Saturday afternoon people filled Wellingon City Corps for the commissioning and ordination service of five members of the Messengers of the Kingdom [Ngā Karere o te Kingitanga] Session and one cadet from the Messengers of Compassion [Ngā Karere o te Arohanui] Session. Greeting the soon-to-be-commissioned cadets, the General said: ‘Normally the General sends a letter – well today I am the letter! ... It is such a privilege to be among you. From a grateful Salvation Army, thank you for being God’s messengers today.’

Each cadet saluted the international leaders before being commisioned as officers with the rank of lieutenant. The General explained told them that, although within a few hours cadets were due to be ordained and commissioned in Nairobi, Kenya, for now they were ‘the newest lieutenants anywhere in the world’.

In his powerful Bible message, the General reminded everyone that the message of the gospel – as captured in the story of the prodigal son – is that ‘anyone can come home to God … anyone!’

Calling for a response to God’s prompting, the General extended an invitation for people to move to the mercy seat. Treasured moments followed as people responded to the Holy Spirit’s leading. As the new lieutenants knelt, family and friends gathered around to pray. When the mercy seat filled up, other people stood in huddles, praying for a fresh touch of the Holy Spirit.

Later that evening, the international leaders joined senior leaders of the territory with officers being given long-service leave, their families and close friends for an intimate dinner.

During the evening 19 officers were honoured for their dedicated service to The Salvation Army, including Commissioners Lyndon and Bronwyn Buckingham (the Chief of the Staff and World Secretary for Women’s Ministries respectively), who were unable to attend due to international commitments which meant they were in Kenya to lead commissioning celebrations.

The General presented territorial leaders Commissioners Andy and Yvonne Westrupp with 40-year long-service badges and honoured them for their dedicated leadership. To close the evening, he shared a devotional thought, reminding those present that ‘by the grace of God, anything is possible’.

The Westrupps’ service was recognised again on Sunday morning at their retirement celebration. The General spoke about the strong personal bonds that have existed between the two couples since they served together in New Zealand when the General and Commissioner Peddle were appointed as divisional leaders in 2007. ‘There is a very personal link with these good people as well as the organisational link as we serve together in leadership in the Army,’ he said. ‘I want to celebrate both of these links here today.’

The General and Commissioner Peddle thanked the couple for their service, spanning 40 years and 12 days, before presenting them with their retirement certificates and inviting Commissioner Andy Westrupp to preach for the final time as territorial commander.

From a report by the New Zealand, Fiji, Tonga and Samoa Territory