13 June 2005
UK Salvationist Brian Oxley has been awarded a high honour by the British Government 'for services to Salvation Army emergency relief operations worldwide'. Brian was appointed MBE (Member of the Order of the British Empire) in the Queen's Birthday honours published on 11 June 2005. The citation not only recognises Brian's important contribution but also acknowledges the value of The Salvation Army's role in international relief work.

Brian Oxley, a retired senior police officer, first participated in Salvation Army emergency relief operations in 1999. At that time The Salvation Army was involved in a large refugee programme in Albania, caring for Kosovar refugees who had fled their country because of the conflict. Brian's skills were a great asset in the management of the relief programme. He also established a workable communication link between the various parts of the country in which The Salvation Army was based.

His experiences in Albania and Kosovo changed Brian's life, and in retirement he discovered a new avenue of service in which his experience and professional background proved valuable assets. Since that time Brian has been involved in a number of relief projects. 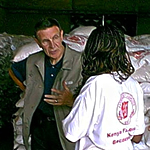 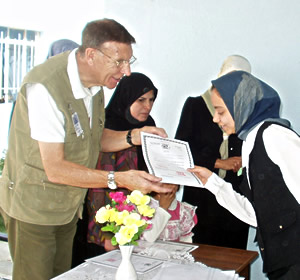 In the past seven years, hundreds of thousands of people have benefited from Brian's support and assistance in their time of crisis or when touched by disaster. His contribution to international relief operations as part of The Salvation Army International Emergency Services team has been inestimable.

Another Salvationist to be honoured is Brigadier Stella Bywaters, a retired Australian Salvation Army officer, who was made a Companion of the Order of Australia (AC). The award recognised her 29 years' service with the poor in Africa, particularly Uganda.

The brigadier's outstanding service was recognised by The Salvation Army in 1978, when she was admitted to the Order of the Founder – the Movement's highest honour. Tags: News