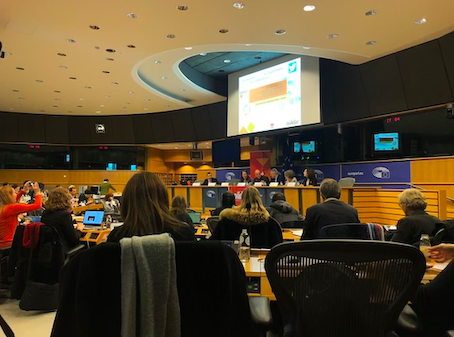 On 13th November 2019, SOLIDAR hosted an event at the European Parliament to present their new report, The Social Rights Monitor, which is composed of research from 16 countries in Europe based on the principles of the European Pillar of Social Rights. This event gave members of the European Parliament and representatives from various civil society organisations the chance to address disparities and inconsistencies that the report made apparent and provide recommendations for the upcoming European semester.

Conny Reuter, the SOLIDAR Secretary General, started by noting the progress that has been made recently. He also expressed optimism that David Sassoli, the new President Elect of the European Parliament, has demonstrated his desire to work towards the 2030 UN Sustainable Development Goals during his term. However, he expressed concern regarding increasing social inequalities between and within European countries and asked: ‘How the new Social Rights Monitor complement the tools that are used during the European semester in order to address these inequalities?’

Katrin Langensiepen, a MEP from the Committee on Employment and Social Affairs [Green Party], took over and stressed the need for a holistic approach for the next European semester, particularly one that views social objectives as being just as important as economic ones. If this is done, the Country Specific Recommendations published by the European Commission can effectively address social inequalities. She also emphasised the need for the Sustainable Development Goals and the Pillar of Social Rights to maintain the same priority as economic goals in order to move towards a more progressive Europe.

Agnes Jongerius, a MEP from the Committee on Employment and Social Affairs [S&D], added on by saying that thus far social progress has not yet been delivered during the European semester, which begs the question ‘Where is this inactivity leading?’. She stressed that the Pillar outlines what Member-States should do in order to move towards social progress and stated that if Member-States do not voluntarily want to implement the Pillar then there should be a push at the European level to do so through the introduction of legislation.

MEP Nicolas Schmit from the Committee on Employment and Social Affairs [S&D] expanded upon MEP Jongerius’ statements by emphasising the importance of monitoring how social rights are implemented and relying upon civil society organisations to speak up when they observe inconsistencies since they are familiar with the social realities on the ground. He also shared a few moving words, affirming that ‘Social rights are not abstract principles, they affect the daily lives of millions of people. They are about their hopes, dreams, and despairs’. Building on this point, MEP Schmit stated that Europe must bring together the economy and social will in order to build a modern economy. ‘This,’ He emphasised, ‘Cannot happen with the social conditions of the 19th century’. He ended his time by sharing his belief that when it comes to implementing the Social Pillar, action plans are not enough. ‘There must be a long period of debate and discussion with partners and governments on how to make the Pillar real’.

Kélig Puyet, the Social Platform Director, closed the conference and demonstrated the need for a comprehensive approach to implementing the Pillar, which includes policies, governance, and funding as well as a link to the Sustainable Development Goals. ‘There has been an imbalance in favor of macroeconomic policies during the European semester and not enough emphasis on the Pillar. The investment in and development of social objectives must not be seen as a means to an end, but an end in and of itself.’

Considerations for The Salvation Army