“The least they could do is pay me as they promised”

Towards compensation for exploitation and violence against migrant workers. 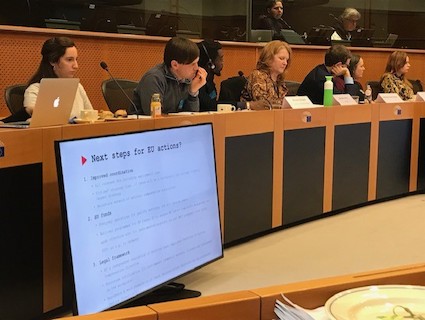 Considerations for The Salvation Army:

Compensation and unpaid wages are crucial aspects of justice and reparation for victims of a crime. For victims of labour exploitation or violence in the workplace, compensation serves as an instrument of restorative justice and of prevention. It is also a recognition of the violation of their rights, the damages they have suffered and the wages they are owed. Victims of labour exploitation who are not identified or recognised as trafficked persons have limited possibilities to claim compensation.  Furthermore, the ability to actually seek and obtain compensation or due wages remains difficult or impossible to exercise in practice. Evidence shows that very few victims have the means to seek remedy. The Special Adviser to the President of the European Commission on compensation for victims of crime has called for an ambitious new EU Strategy on Victims’ Rights from 2020-2025 and set out numerous recommendations for action, including a focus on reparations, a firewall for undocumented victims of crime and the provision of information and free legal aid for undocumented workers.

This event was co-hosted by Domènec Ruiz Devesa, Victim Support Europe, La Strada International and PICUM. The aim of the conference was to engage with returning and newly elected MEPS and key institutional actors around the critical barriers to access compensation and unpaid wages for migrant workers subjected to exploitation and violence, including human trafficking. The discussions centered on concrete measures that the new European Parliament and European Commission can take, and legal, policy and practice measures that can be taken at EU and national level to promote safe reporting, effective complaint mechanisms, and access to justice for all victims, including those with precarious or irregular residence status.

MEP Domènec Ruiz Devesa (S&D, Spain) opened the meeting by speaking of the focus media gives to the arrival of migrants and refugees to the EU. They highlight non-compliance with EU law when it comes to incoming boats etc., but the conditions of migrant workers are rarely mentioned. Many migrants come to the EU specifically to work, but they are faced by a reality that does not give them many legal options to do so. Many end up working illegally and without any labour contract. This can lead to serious exploitation and no access to public services, despite the fact that it is a legal obligation for countries to provide legal working conditions even if the person is undocumented. There is also a negative narrative due to the far-right discourse that has been taken on by media. Ruiz Devesa asked how we can provide improvement and a more positive discourse on migration.

Moussa Sangare, President and Coordinator of Ivorian Community of Greece, shared his first-hand experience of being a migrant worker in the EU. He has been subjected to exploitation and witnessed many friends go through the same situation. Sangare shared stories of working conditions in which taking breaks or having a meal was not an option, and the insurance was not paid. Complaining about the wages was not possible, as this could lead to the boss reporting the migrant to the police for being undocumented. ‘It is his country and his rights, after all’ said Sangare. An additional problem is that oftentimes migrants do not know what their rights are. They do not know that they can make a complaint or whom to turn to. Sangare managed to get better life after several years of exploitation, as he found a way to make a complaint and obtain his rights.

The Importance of Compensation for Victims of Exploitation

Ruth Shrimpling from Victim Support Europe spoke on the importance of compensation for migrant workers. Compensation fulfils a victim’s need for acknowledgement and it plays a restorative role. There are, however, unfortunately a lot of obstacles for compensation for victims: 1. There might not be much information in the victim’s own language. 2. The only information available might come from the police, and the victim has a fear of reporting anything to them. 3. Most victims are not aware of available support services. 4. The victims might not have family or support system in the new country that could offer support in the aftermath of exploitation. Shrimpling stressed that the EU should keep bringing together different actors to discuss these matters. They should also fund the coordination of support systems and systematically work on these issues.

The Importance of the Victim’s Perspective

Suzanne Hoff, International Coordinator from La Strada International, stressed that we need to highlight the victim’s perspective more. They will often not report abuse in fear of the consequences. ‘We need better legal representation and legal aid, and not only rely on NGOs to take on these tasks,’ Hoff underlined. If there is no legal representation the odds of getting compensation is miniscule. She also reminded the audience that even in cases of trafficking people are still sent back on a Dublin claim, and called for more cooperation on an EU level.

In the second panel, the speakers discussed what actions can be taken at EU level and by the MEPs.

Working Towards a More Comprehensive Implementation of Legislation

Francisco Gaztelu Mezquiriz, Head of the Irregular Migration and Return Policy-unit, DG Home, was of the opinion that the current legislation is sufficient, but the implementation is lacking. ‘Employers who are exploiting people need to be sanctioned and we need to better at overseeing implementation in the Member States,’ he stressed. This might mean an increase of infringement cases in this area. Mezquiriz carefully stated that the group of people we are talking about is a very specific one, as they are staying in the EU irregularly. ‘Most of them should have been returned to their home countries, but while they are here they need to be protected,’ he said. They need more than ad hoc solutions.

Tineke Strik (NL, Greens co-coordinator for LIBE) and MEP Ernest Urtasun (ES, Greens vice-chair and member of the FEMM and ECON Committees).  Urtasun stated that it would be very important for each migrant to be able to register themselves, even if it’s a limited registration. ‘This way they don’t remain a ghost in their new country even though they are undocumented’, she explained. Strik stressed that we should focus on improving implementation of legislation and not be distracted by creating new laws. National coordination is crucial as it makes specific institutions responsible for the specific element of victim compensation. ‘The police should not be the responsible actor, as this creates a high threshold for the victim’, she concluded.