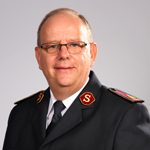 General André Cox was born in 1954 whilst his Salvation Army officer parents were serving in Zimbabwe. The fact that the General was born in Africa to an English father and Swiss mother makes him feel very much at home when working in different cultural settings.

Following his marriage to Silvia Volet, they entered the International Training College in London, England, and were commissioned as Salvation Army officers in 1979 returning to serve in corps appointments in Switzerland. From there, with three small daughters, Myriam, Esther and Sarah, they were appointed to the Zimbabwe Territory. Whilst in Harare Captain André Cox held various headquarters appointments including that of Public Relations Secretary and Finance Secretary.

Returning to Switzerland the Coxes were appointed to the Switzerland, Austria and Hungary Territorial Headquarters and during their eight years of service in Bern, Major André Cox was appointed as the Secretary for Communications and then as the Secretary for Business Administration. This was a key time in his personal development due to the heightened exposure to many aspects of Salvation Army management and administration. Over the years has grown an increasing belief that the handling of the business matters relating to The Salvation Army needs to be conducted to the highest ethical and management standards as a true reflection of sound biblical stewardship.

Subsequent territorial leadership in Finland and Estonia, Southern Africa and the United Kingdom with the Republic of Ireland have deepened General André’s belief that:

‘Although it is not by our works that we are saved, what we have received and believe must translate into our everyday lives. We cannot escape the reality and the inseparable link between belief and behaviour. The two must go hand in hand if our Christian witness is to be authentic and meaningful. If it is true that we belong to God, that we are building for his Kingdom for eternity by sharing the truth of the gospel then it must also be reflected in our daily living.’

From his appointment as Chief of the Staff, he was elected the 20th General of The Salvation Army on 3 August 2013. General Cox shares his ministry with his wife, Commissioner Silvia Cox, who is the World President of Women’s Ministries.

Along with his wife, the General has a strong sense of family. They are very proud of their daughters with their respective husbands and also their grandchildren, Rebecca, Lily, Leona, Wendy and Kevin.

Copyright and privacy © 2021 The General of The Salvation Army