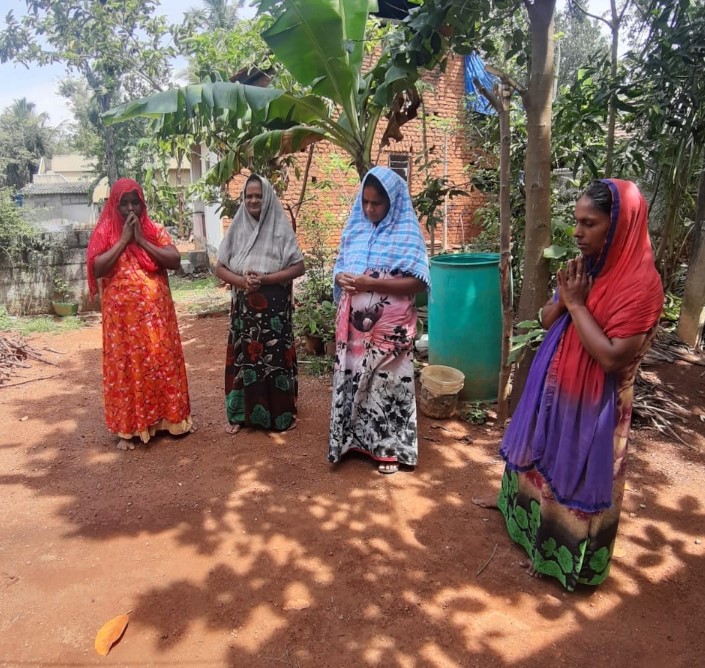 SOME coronavirus stories have their roots in Salvation Army ministries that have been ongoing for years. In the south of India, for instance, a community health response saved a man’s life and gave his wife new purpose – new purpose that has led to her becoming part of The Salvation Army’s COVID-19 response.

The driver and staff from The Salvation Army’s Community Health and Development Programme (SA-CHDP) in the India South Eastern Territory had unexpected help when they set out to distribute medicine, food and sanitary items to people living with HIV and Aids in Tamil Nadu. During India’s COVID-19 lockdown period, many people living with HIV and Aids have not been able to access antiretroviral medicines as there is no transportation to the towns where they would usually collect them, so the distributions will have life-saving consequences. Similarly, many have not been able to earn money during this time, so the food and other essentials will make a massive difference to a number of families.

On the morning of a distribution, Sumita [not her real name] called the SA-CHDP office to offer her help in providing this vital service to some of the area’s most vulnerable people. She, of all people, had a great insight into what they were facing.

In 2003 a young girl came to our village and introduced herself as Vijila, a social worker working for The Salvation Army’s HIV/Aids care and support project (supported by Alliance International).

At this time, already three avasthas had been given to my husband. (An avastha is where the parish priest gives holy bread to a dying patient and prays to the Lord for his soul to be taken to heaven. This is done three times before he or she dies.) We had already started to make arrangements for his funeral. The time for him to die was near, but I was praying to God to send me an angel.

Two men came with Vijila, and introduced themselves as Alexander from nearby Kulasekharam and Suresh, the project coordinator.

My neighbours had started to object to my husband’s burial being near our home. Since it is a hilly area they feared that their well water might get contaminated with the HIV virus (which they believed was the cause of his illness).

Alexander and Suresh said that my husband was not going to die and that they would take him to The Salvation Army’s Catherine Booth Hospital (CBH) in Nagercoil. I opened the door and showed them the room where my husband was. The windows were closed. When they asked why, I explained that the neighbours were peeping inside the room out of curiosity. The room was stinking badly.

Then Suresh asked me to get water which he gave to my husband, who then drank four more glasses. They opened the windows; this was the first time for months that he was seeing natural light.

I think my husband might have known about his HIV status long before and he was afraid that it might affect me and my children. So he had remained in this secluded room for months, using a separate cup and plates.

My husband used to work as a tailor in Mumbai, where he had had a large number of customers. For the previous year, though, he was getting ill frequently. Unable to continue his tailoring business he closed the shop and gave it up for rent. We lost all our savings and were bankrupt.

Believing that my husband was not going to recuperate, I urged Suresh and Alexander to let him die as soon as possible; we couldn’t bear to see him suffer further. However, they immediately went to Kulasekaram and arranged a taxi. I packed a few clothes, two plates and two cups, and left my two daughters (aged six and five years) in my mother-in-law’s care. Suresh and Alexander asked me to get a blanket.

My husband was not even able to stand on his own, so they wrapped him up in the blanket and carried him across the 20 slippery steps to the road. Since it was very late, Vijila and Alexander left for home. Suresh accompanied us to the SA-CHDP office to meet Mr Benny (Benny Dhaya, Director of SA-CHDP), who helped us to buy medicines, since I didn't have any money.

Then we were taken to meet Dr Ebenezer, who referred us for an ELISA HIV antibody test. There I also met Mr Prasad, the lab technician. Even before the test results arrived, Dr Ebenezer admitted my husband to the Mercy Clinic Ward of CBH and started to treat my husband for severe diarrhoea, bed sores and high fever.

I was curious to know about the HIV status of my husband but the doctor didn’t reveal it. Of course, I was then totally confused about my own HIV status and that of my children.

Directly opposite our room was the chapel – such a calm place. Whenever I felt worried, I would visit and pray to the Lord for my children. It was such a healing place for me.

The next morning the counsellor, Mrs Chiristilda, spoke to my husband. She also asked my willingness to do an ELISA test for myself. I took courage and told her that I would bring both of my children so all three of us could be tested. I tested HIV-positive, but both my young children were HIV-negative.

My husband was given the best care. There were frequent visits from Dr Ebenezer, and the nursing staff were also kind to us. Food was arranged free of cost by the SA-CHDP.

When my husband was admitted he had only his bones left! He was advised to do sit-ups by holding the bed railings in the morning and evening. Soon he started to do it quite frequently. During the night, while interacting with patients and care staff from neighbouring rooms, I kept asking what might happen and how many days we were likely to be there. In the end, we stayed for three months.

Despite all that was happening, I didn’t cry and did not blame my husband, because of the faith that I had in SA-CHDP and the CBH.

Today, my husband is 56 years old and is living healthily! He is back doing his tailoring business and I work as a social worker with the HIV Positive People’s Network, bringing confidence to many other households.

Seventeen years ago my family members, the general community, and even the parish priest thought that death was close to my door. Without the intervention of Vijila, Alexander, Suresh, SA-CHDP and CBH my husband would have died long ago. It was a last-minute intervention which saved him. Since then, the regular visits by field staff and the coordinator helped us to plan for our future and to avoid selling any of our remaining property. Since we are both now earning, we have been able to build a house.

Mr Benny has also helped us with advice on higher education and job opportunities for our children. Our eldest daughter is a microbiologist and my younger daughter is doing her BSc in Nursing at The Salvation Army’s Catherine Booth College of Nursing. I thank the Lord every day for the medical services, educational and nutrition support, counselling services and, above all, the love and affection shown to us by the entire staff team of SA-CHDP.

Always I remember the words spoken to my husband by Mr Benny: ‘God will take care of you, your wife and children; don’t you worry.’ This is the faith instilled in me and I have not lost hope.

Benny Dhaya is delighted that, having been helped by The Salvation Army when she was at her lowest, Sumita now wants to give back. He recognises that, without the community health team’s intervention, both Sumita and her husband would now be dead. ‘Mrs Sumita is not able to pay back anything in monetary terms to The Salvation Army,’ he explains, ‘but today she can offer her voluntary services! I praise God for how he has supported women like Sumita through The Salvation Army.’