Interview: ‘Food has been handed out as Lviv smoulders’ 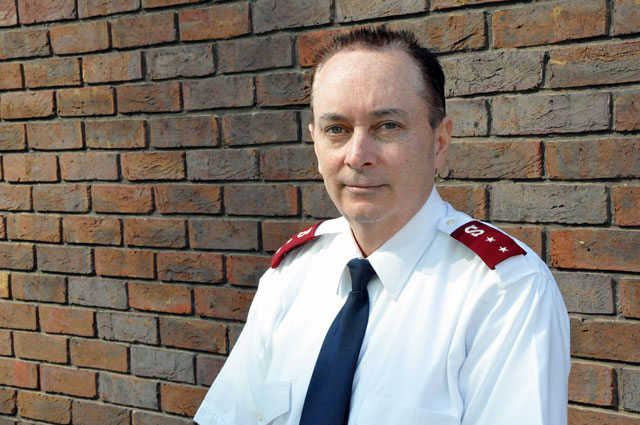 THE Salvation Army’s International Emergency Services have been working to help people caught up in the conflict between Ukraine and Russia. Team member Captain Matthew Beatty explains how the church and charity has been supporting people who have fled Ukraine and those still in the country.

The Army without guns was already in Ukraine when the fighting began. The Salvation Army has been at work in the country for almost three decades. And as Russian forces moved across the border, the international Salvation Army mobilised its emergency services team to send food and other vital supplies so that the church and charity’s personnel in cities such as Lviv, Kyiv and Kharkiv could continue to serve their communities.

In March, Captain Matthew Beatty, a US Salvationist appointed to The Salvation Army’s International Emergency Services, headed for the Polish-Ukrainian border.

‘We were tasked with getting stuff into Lviv, because at the time I think the stats were that only 13 per cent of stores were open throughout Ukraine,’ he says, after returning from the region to the team’s base in London. ‘The Salvation Army in Lviv was in dire need, so we needed to figure out a way to get supplies in there really quick.

‘At the time there was allegedly a neutral zone between Poland and Ukraine, where we were hoping to meet the officer from the Lviv Salvation Army. We were going to transfer supplies to him, but when we got to the border, the neutral zone no longer existed. We didn’t have authorisation from The Salvation Army to go into Ukraine, so we had to wait at the border.

‘In the end, we found another NGO that had a half-empty truck. We were able to throw our supplies on it and send a message to the Lviv Salvation Army officer – who doesn’t speak English – that they were now on a white truck coming through and he had to find it.

‘Despite the crazy odds, he and the van found each other. There must have been a little godly intervention.’

The first shipment that Matthew’s team sent to Lviv was, he admits, more haphazardly assembled than those that have been going in since. ‘It was just random food and supplies – it was thrown together so quick, because it simply needed to be done urgently,’ he says.

Subsequently, the emergency services team have tried to fulfil a list of requested items, which have included generators, stoves, heaters, tents (with no green or brown markings that might lead to their being mistaken for military equipment) and sleeping bags. The deliveries have been taken into Ukraine by a major shipping service that works in partnership with The Salvation Army.

After receiving essential items, The Salvation Army in Lviv distributes them to people in need in the city and sends them on so that centres in other parts of the country can serve their communities.

‘The Salvation Army in Lviv is based in an apartment, and people go there for help,’ says Matthew, who remains in contact with the church. ‘It has been handing out food and other stuff while the sirens have been going off and the town is smouldering from cruise missiles.’

Helping those who have left

As well as sending vital food and hygiene supplies into Ukraine, Matthew has been helping people who are fleeing the country and arriving in Poland.

The Polish reception centres for refugees were well run and already well stocked with food, he says, so The Salvation Army began to help in a different way.

‘Ukrainians coming into Poland could get a one-time cash payment through the UN refugee agency before getting on the Polish social system,’ he explains. ‘We picked up that the first payment was quick, but the second could take a couple of months, so there was a gap in between where people needed money if they perhaps had not yet found a job or moved on to another country in Europe. So we have provided cash vouchers.

‘In the initial project, we supplied four Salvation Army centres with $20,000 in cash vouchers that they could hand out to people, giving them the dignity to buy what they wanted when they needed it.’

Hygiene items have also been handed to Polish Salvation Army centres to distribute to refugees. But Matthew adds that Salvation Army personnel are going to be ready to meet more than physical needs.

‘All NGOs are focusing on trauma and emotional care – and for The Salvation Army it’s spiritual care too,’ he says. ‘We were there in the week when there were 150,000 people crossing the border into Poland. We went to a reception centre and if we smiled at a kid, they’d look away.

‘There’s going to be a heavy need for emotional and spiritual care for everybody.’