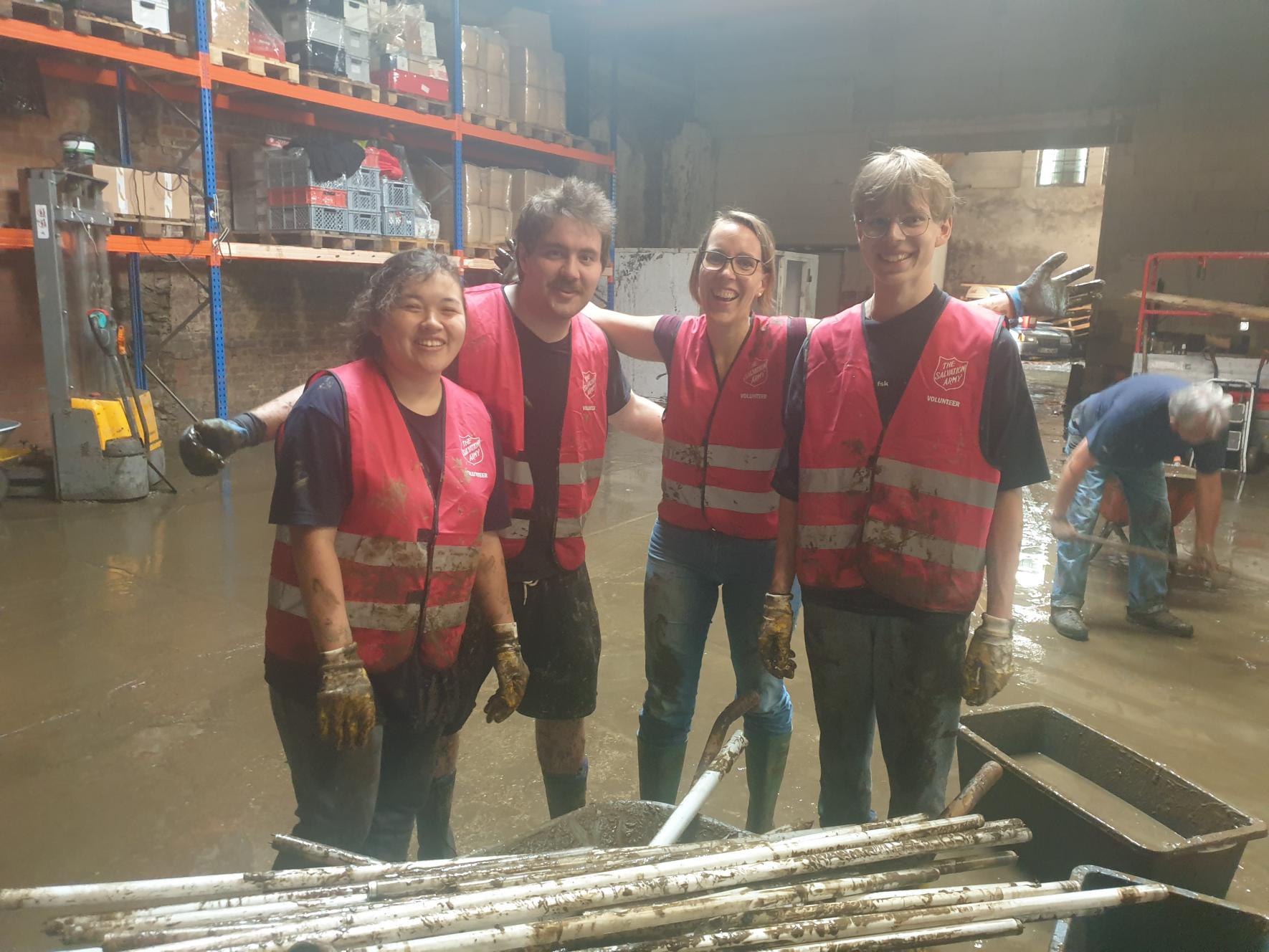 SEVERE flooding in many parts of western Europe has claimed 188 lives and wrought destruction across several countries. Rivers in numerous areas have burst their banks, causing damage to property and essential infrastructure. Although Salvation Army properties have also been inundated, teams across Belgium, Germany and the Netherlands are supporting first responders and local authorities in a variety of ways.

At the height of the floods, local authorities called for the evacuation of Liège, one of Belgium’s largest cities with a population of around 200,000 people. While The Salvation Army’s property close to the River Meuse did flood, damage was largely confined to its basement. This meant that it was still possible for a team of volunteers to serve the community which was badly affected by the torrents.

Volunteers helped to distribute water and waffles, and went out into the neighbourhood to provide bedding, clothing and emergency food and drinks to people whose homes had been devastated.

An emergency appeal for food, clothes and hygiene/childcare items has been launched by The Salvation Army nationally, with collection points from Brussels to Antwerp.

Following crisis management meetings with municipal government on Friday and over the weekend, The Salvation Army in Germany is coordinating a central response from its headquarters in Cologne. At current estimates, 159 people have died in the country, with more than 700 people still missing after the deluge. Currently, thousands of people cannot be contacted, as telephone lines, mobile networks and electricity supplies have been breached.

‘We will provide, among other things, hot meals, drinks and blankets in the areas most affected,’ says PR manager Manfred Simon. ‘We are supporting municipalities with manpower and food, helping first aid teams locally.’

For instance, a team of 12 has been deployed in Solingen since Friday night, helping flooded-out property owners with cleaning, providing hope to people and emergency groceries. Several Salvation Army personnel have interrupted their summer holidays to support the team.

Worst affected is the area of ​​Bad Neuenahr-Ahrweiler, which is only 60 kilometres from Cologne. ‘The authorities are facing many tasks and focusing on first aid and rescuing people,’ explains Manfred. ‘Our response is contingent on discerning the needs that the municipalities will have.’

Salvation Army officers in Stuttgart are standing by ready to deploy their emergency vehicle to where it is most needed.

While some Salvation Army locations have been flooded, the effects on clients and employees have been mitigated. During the downpour, it was necessary to evacuate a few service users in Maastricht. They have found refuge with family or friends, or in one of the sports halls designated as emergency rest centres.

The Salvation Army is in close contact with local authorities, particularly in the Limburg region in the south of the country which has been badly hit. Volunteers have offered spiritual support at the evacuation centres, and from Treebeek Corps (church) evacuees unable to return to their homes have been provided with clothing.

Teams of volunteers have been helping affected residents with cleaning and restoring homes and streets. Presently, a team of nearly 30 people has already started this gruelling work, and in the coming days more people from The Salvation Army will be deploying in the disaster area.

Coordinator Gert Kraaijveld and regional manager for Limburg, Diana van Dijk, are managing the response. ‘We have contacted the municipality of Valkenburg and indicated that we would like to do something for those affected,’ Diana indicates. ‘We were then assigned an affected area. We went there this morning with three buses full of people and equipment, ranging from cleaning supplies to garden tables, high-pressure water jets and vacuum cleaners.’

The reactions from beleaguered residents have been very positive, says Gert. ‘We just started ringing doorbells and asked everywhere if we could help with anything. Not everyone needs this, but people do respond very enthusiastically to our offer of help. Entire families were already working at some addresses, but they immediately referred us to places where people without a helper were clamouring for help.’

‘You really see an enormous solidarity and willingness to cooperate here,’ adds Diana. ‘Although it is deeply sad what has happened and the havoc in some places is enormous, we see that people are taking action and are grateful for all the help they are being offered.’

Gert gives examples: ‘We met an elderly couple who were sitting in their living room where the floor was still soaking wet. We immediately got to work. In another place were people who only had help from a relative. We were also able to get started right away with about five people. Right now, people know we’re there and come to us when help is needed.’

He continues: ‘The devastation is great. And we will look at how and where we as The Salvation Army can provide further assistance in the region in the coming days.’

Support from local businesses has already proved to be enormously helpful. One hotel donated tables, chair, mints and chocolate. ‘Fantastic!’ exclaims Gert. The Salvation Army’s soup bus has also been deployed. Local voluntary organisation Caritas was asked to make 150 portions of soup. ‘We are now handing that out,’ says Diana. ‘That affects people. A cup of soup is only a small Band-Aid on the wound, but it is very much appreciated.’