Few structures so typify England's magnificent heritage as well as Sunbury Court. This restored 18th century mansion and its rambling, picturesque grounds and gardens, are living testament to the grandeur of an age long-since past.

An understanding of some of its rich history may make your visit to this splendid home more rewarding and pleasurable. Today, a staff of fourteen maintain and operate Sunbury Court for the thousands of visitors and guests who visit annually. But when it was built in 1723 by John Witt, just prior to his marriage, more than forty cooks, chambermaids, butlers, valets, coachmen, footmen, housemaids and gardeners were required to ensure its smooth and efficient running.

Not only did the estate then sprawl over more than one hundred acres, but it also extended to the banks of the River Thames and included the two islands now covered by parks and private residences. Its main building with stables, coach houses, yards, gardens, orchards and pastures, was completely enclosed by its brick wall.

Earlier, the land had been part of an even larger estate, the Royal Manor of Kempton. No trace of that historic building, frequented by Henry III, Edward I and Edward II, remains today. Located approximately halfway between Westminster and Windsor, Kempton Manor was an ideal overnight stopping point for the Court and its large entourage as it moved from palace to palace during the year, having exhausted the food supply of one royal residence after another. 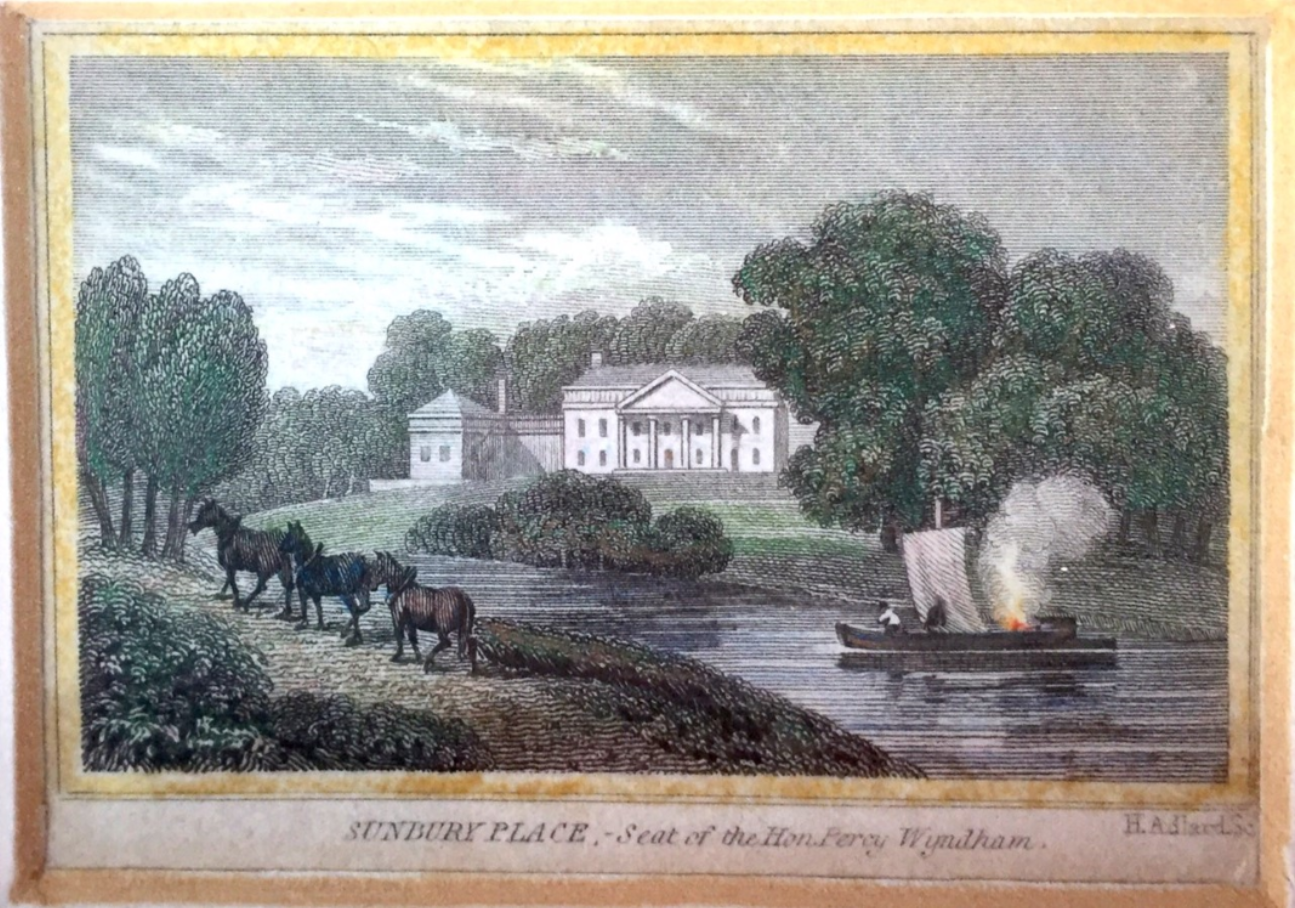 Witt, probably a retired master builder, lived in the imposing structure he had built with his bride, only twelve years before it was sold in 1735. It changed hands again in 1751 and still again in 1755. Now it was to become the home of one of the century's great heiresses, Anna Maria Delegard. And when this luminary of English society married in 1764, Sunbury Court rose to its moment of glory. Miss Delegard married the powerful and influential George Fermor, the 2nd Earl of Pomfret Lord of the Bedchamber and Ranger of the Little Park in Windsor.

It was the Earl who commissioned the young, aspiring Swedish artist, Flias Martin, to paint the frescoes that now surround the visitor in Sunbury Court's main dining room. And it was during this same period that the estate was thrown open to the higher circles of English society. Guests were treated to sumptuous dinners and regal balls in the stately mansion, roamed the vast gardens dotted with decorative pools, and gazed across a vista of pastures and orchards separated from the mansion onto the grounds of the house itself without an unsightly fence that would destroy the view.

But the Earl and his wife, these genteel and sophisticated hosts, were to occupy Sunbury Court only until 1799. From that year until 1863, the estate knew numerous owners and underwent a variety of changes which saw wings refurbished, added and razed. It was one of these occupants the only other noble in Sunbury Court's history who added the tunnel leading across the ancient Saxon road to his boathouse beside the Thames. This was Jack Needham, the Lord Kilmorey, who bought the mansion and its grounds in 1860 for £16,500. The entrance to the tunnel, long since sealed, may still be seen in the brick wall that fronts the River Road.

The Court's last private owner was a Victorian of considerable wealth and achievement, William Horatio Harfield, a man whose name is preserved in Harfield Road, the thoroughfare that forms the eastern boundary of the present property. And it was during Harfield's residency that a disastrous fire struck the building, evidently damaging one or both wings of the mansion but leaving the much older core intact. Harfield, known locally as the 'Colonel' because of his association with the Middlesex Yeomanry, is responsible for the present east and west wings of the building, including the library and the dignified conference room. With Hatfield's death, the property became the Sunbury Court Club in the opening years of the present century only some of the silver service embossed with the Club's emblem and crest remains its at vestige of its once festive and elegant atmosphere. When the Salvation Army purchased the empty and derelict facility in 1921 it was saved from certain destruction. 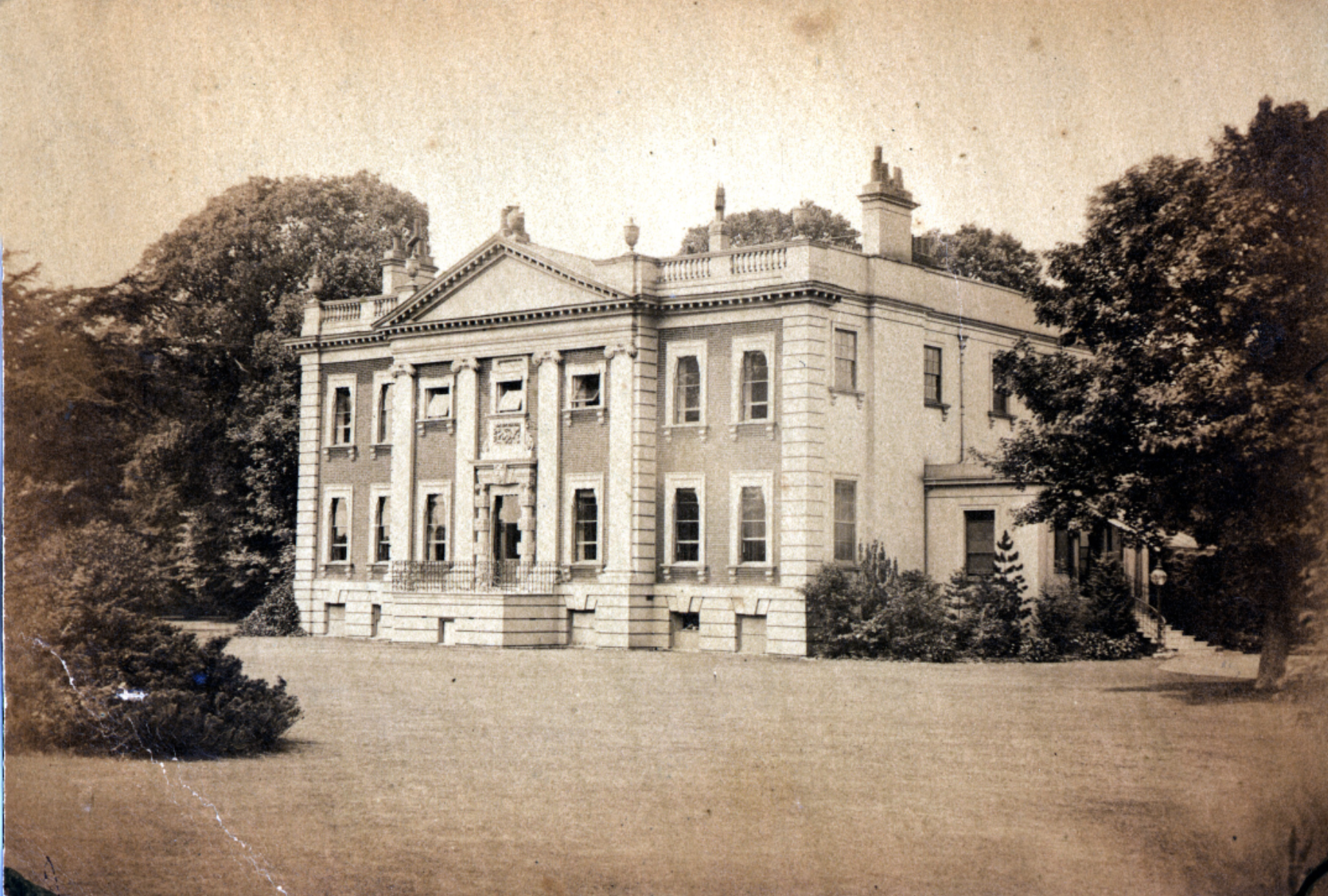 It is a tribute to the foresight of the Army that Sunbury Court stands today not only as it living monument to its rich national heritage, but also as a working institution providing unexcelled conference and meeting facilities for thousands of delegates from all over the world.

Visitors recline in the mansion's 250-year-old drawing room, surrounded by the artistry of Elias Martin, the Swedish painter who came to study in London and found himself decorating the homes and palaces of the wealthy. Restored in recent years to their original brilliance through the co-operation of the Swedish Institute of Stockholm, these priceless frescoes with their pastoral settings and gothic landscapes are just its they were seen when Martin painted them directly upon the plastered walls more than two centuries ago.

In the hallway that separates the dining room from the lounge, visitors pass under the graceful moulded ceiling and skylight. Like the Martin paintings, these simply proportioned designs are part of the original 18th century building.

The hall is an appropriate introduction to the hexagonal lounge. Once a music salon, this room features one of the most remarked about objects in the building, a 3,000-piece crystal chandelier, thought to be an artifact of the original mansion. Here too are marvellous examples of Victorian mirrors, giltwork and a late 19th century Regency fireplace of marble.

One of the most attractive features of the house is the curved main staircase. Visitors see it today much as it was when the mansion took shape in the early years of the 18th century. But a stairway they don't see is the winding spiral of ironwork topped by a skylight and located near the entrance to the Conference Room. While the stair itself is probably Victorian the well in which it is built has been used by the staff for access to the kitchens and storerooms for more than two-hundred years. 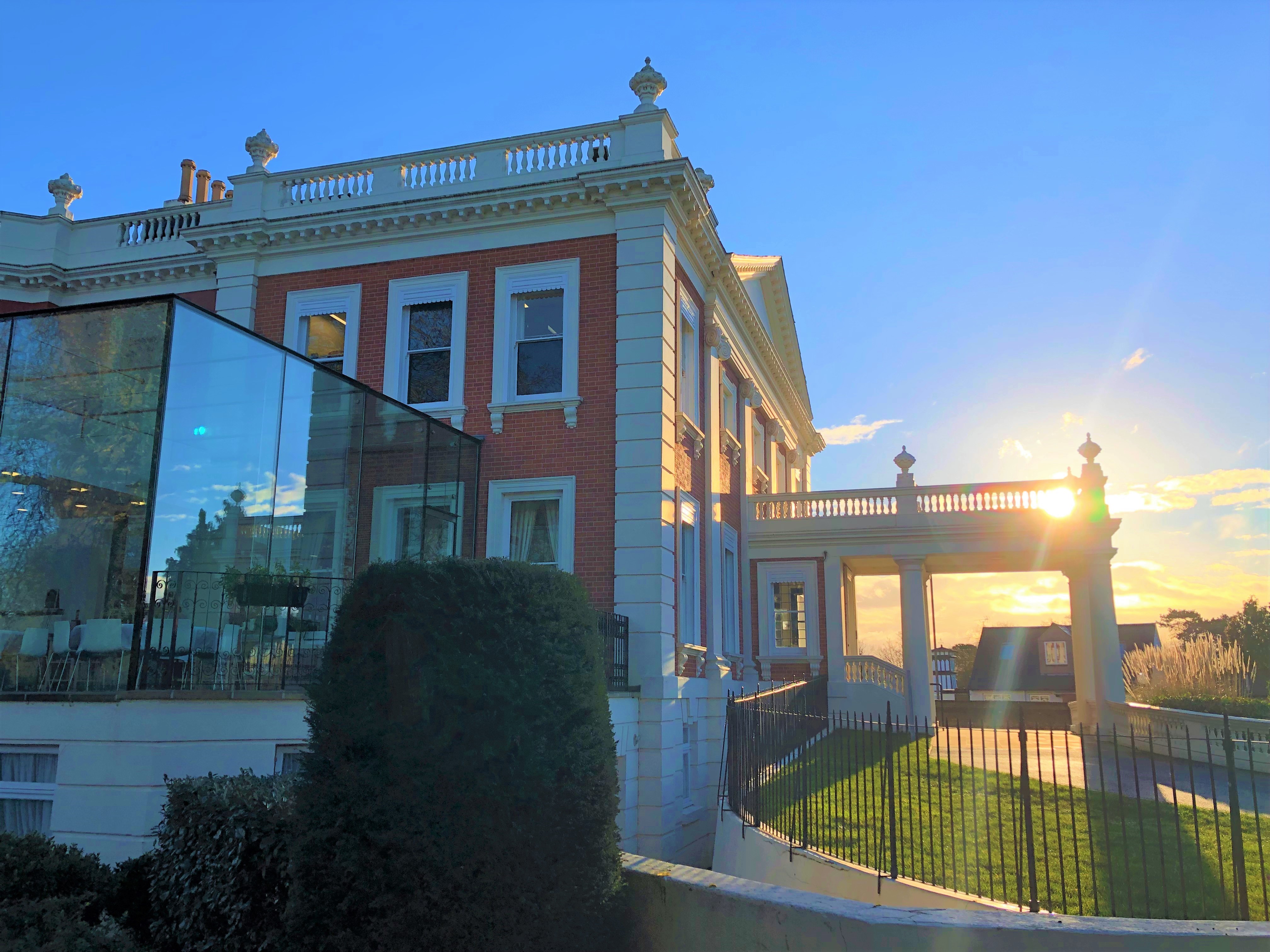 The Victorian wings added by Colonel Harfield in the late 19th century are integrated faithfully into the older core of the building. Hatfield even continued using the expensive but novel device of false windows that are fully glazed with black glass but have no interior opening. Their only purpose is to preserve the balance of the exterior structure. The wing to the east, housing the Library, the Reception Hall and a small Meditation Room, is noteworthy for its black and white marble floor. But it is the west wing, with its massive, high-ceilinged Conference Room and elaborate Coachman's entrance, that is of special interest to Salvationists. It is here that the first Salvation Army High Council gathered early in 1929. The Army's successive Generals since then have been elected by Commissioners assembling from their posts around the world in this impressive hall.

Mention Sunbury Court to a Salvationist anywhere in the world and chances are they'll respond: 'Oh yes, that's where they elect the General'. Sunbury Court has a truly international reputation. Over the decades it has been the focal point for some of the most important moments in the Army's history. It has served the Army well from those days in 1925, as a gathering place for young and old, as an eventide home, a recreation and relaxation facility for soldiers, sailors and airmen during the war, and a conference centre for torchbearers, home leaguers, youth leaders, local officers of various sections, and councils for staff and corps officers. There are no ghosts at Sunbury Court. But there is a spirit, a spirit that links its past with its present, and each visitor to its enchanting heritage.

Compiled and written by Mike L'ngersma