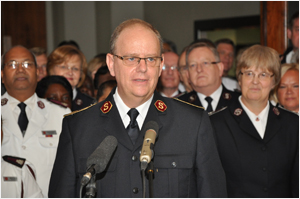 LONDON, August 3, 2013 - Commissioner André Cox, a Swiss-British Salvation Army officer, has been elected as the 20th General of the Christian church and charity. The election took place at the High Council, which saw 117 of The Salvation Army’s senior leaders from around the world gather just outside London for the sacred task of choosing the next international leader.

The General accepted his new responsibility in a spirit of humility, saying that, irrespective of the rank he held, he had not moved away from his original calling to officership – to be God’s servant and to proclaim the gospel. General Cox shares his ministry with his wife, Commissioner Silvia Cox, who is the World President of Women’s Ministries. Together General and Commissioner Cox will lead the 1.5 million strong world-wide church of The Salvation Army.

Born in Harare, Zimbabwe, to an English father and Swiss mother, André Cox spent his childhood years in Zimbabwe and the United Kingdom, before moving to Switzerland, where he met his wife and from where they entered training to become Salvation Army officers, taking up their first appointments in 1979.

The 59-year-old General has vast experience of the international ministry of The Salvation Army. In the early years of his Salvation Army officership, General Cox held appointments in Switzerland and Zimbabwe. More recently he has served as the territorial commander in the Southern Africa Territory, the Finland and Estonia Territory and the United Kingdom Territory with the Republic of Ireland. In February 2013 he was appointed as Chief of the Staff – second in command of the international Salvation Army.

On being announced as The Salvation Army’s 20th General, the new international leader told more than 10,000 people from around the world watching via a live webcast that he was thankful to God but aware of the ‘awesome task that has been placed upon our shoulders’. He continued: ‘I pray that The Salvation Army will be known for being a force for good in the world … that The Salvation Army will be a force for positive change and transformation in the communities in which we serve … [and] that Salvationists will live up to the spiritual values we proclaim.’

The Salvation Army is an international Christian organization that began its work in London, UK in 1865. The Salvation Army gives hope and support to vulnerable people today and every day in 126 countries around the world. The Salvation Army offers practical assistance for children and families, often tending to the basic necessities of life, provides shelter for homeless people and rehabilitation for people who have lost control of their lives to an addiction.

To arrange an interview with General André Cox, please contact