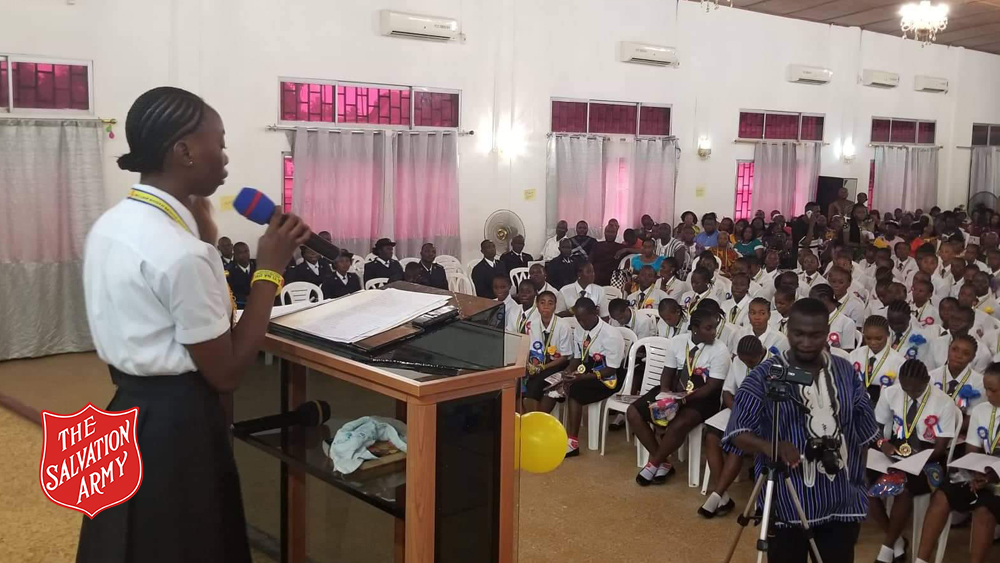 A STUDENT from a Salvation Army school in Liberia has received a national award, recognising her as being among the 13 highest-achieving students in the country. Junita H. Sangare came top of her class of 236 students from William Booth High School in Paynesville, just east of Monrovia. She also won a fully-funded prestigious United World Colleges (UWC) International Scholarship, beating more than 450 applicants from high schools across Liberia.

Salvation Army schools in the country performed outstandingly among those who took the West African Senior School Certificate Examination (WASSCE) tests in 2019, with pass rates of 97.46 per cent at William Booth High School, 96.32 per cent at Len Millar High School and 92.31 per cent at John Gowans High School. This compares very favourably with the national average pass rate of 68.85 per cent.

WASSCE is a regional standardised examination for the anglophone West African countries of Gambia, Ghana, Liberia, Nigeria and Sierra Leone.

In order for a candidate in Liberia to be considered for a national merit award, he or she must demonstrate an outstanding performance with credits in five subjects including Mathematics and English Language. Junita enrolled in the Salvation Army school system as a first-grader at William Booth Primary School. At the high school she was captain of the debate team and concluded her time there as Student Council President, providing strong leadership for her fellow students, most of whom were older than her.

Thanks to her scholarship from UWC – a global educational movement – Junita is now studying in Japan, with travelling expenses, tuition fees, accommodation and all living expenses covered.

Because of her ongoing studies, Junita was not able to attend an awards ceremony on National Flag Day at the Centennial Memorial Pavilion in Monrovia – a significant national site, where the country’s presidents are inaugurated. She was represented by one of her classmates, Emmanuel Johnson. The Vice President of Liberia, Her Excellency Madam Jewel Howard Taylor and Acting Minister of Foreign Affairs, Hon Henry B. Fahnbulleh, presented the awards and certificates, also formally recognising the part played by the students’ parents.

Speaking on behalf of the government, the Vice President congratulated each of the 13 students for their excellent performances and encouraged them to continue striving for academic excellence.

Howard Dalziel, Director of Salvation Army Schools International, added his congratulations to Junita on ‘her excellent performance and the wonderful opportunities this academic achievement will bring. We also acknowledge the hard work of all students in the school, the dedication of teaching staff and commitment from support staff to ensure that students not only exceed academically but receive a nurturing, holistic education.’