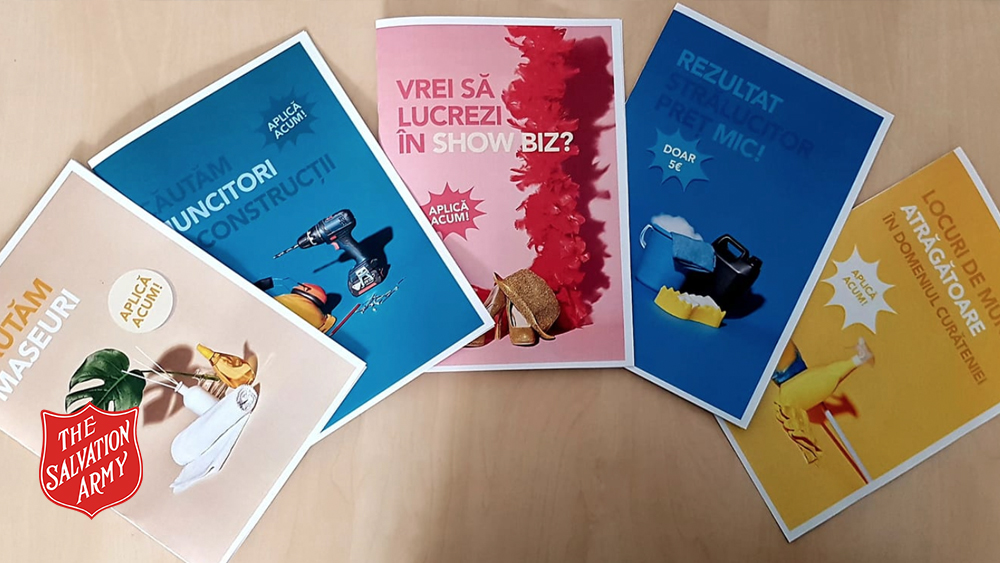 JOINING together across Europe, The Salvation Army has commenced its first pan-continental campaign, in order to raise awareness of – and deter people from being duped into – human trafficking and modern slavery. Around half of the 31 European countries with a Salvation Army presence have so far begun a multi-modal campaign, encouraging consumers to consider whether low prices come at the high cost of human exploitation. In ‘source’ countries, social media activity and poster campaigns are prompting job hunters who may be susceptible to unrealistic offers of work abroad to consider whether the offers are too good to be true.

The Salvation Army in the UK is the latest to launch its variation of the campaign, coinciding with a major modern slavery plot line in the popular national ITV continuing drama series, Coronation Street. Script editors have been working behind the scenes with Salvation Army specialists who provide support to victims who have been rescued from slavery in the UK, in what is set to be an ‘explosive’ series of events for the character Alina Pop as the devastating truth about her life as a trafficked woman is revealed.

Romanian actor Ruxandra Porojnicu, who plays Alina, has spoken about the importance of raising awareness of these important issues. She said: ‘All these victims, like in Alina’s case, can appear like they are living a normal life. No one would notice they are going through such tough times and they need help unless we look more closely. Victims need to know there are so many people who care for them and support is available when they need it.

‘I am keen to raise awareness about this worldwide problem and not be indifferent. We should all know about modern slavery. We should all spread awareness about subjects that have such a negative impact on people’s life so that changes can be made and help provided. Some people are depending on us and our actions.’

From the fictional Weatherfield in the north-west of England, to the red-light district of Amsterdam, from affluent Oslo in Norway to the poorest European capital city, Chișinău in Moldova, The Salvation Army is working to prevent victims entering the cycle of modern slavery and is supporting victims where they have escaped from the grips of their slave masters.

The Salvation Army’s pan-European anti-trafficking campaign uses ‘fake’ adverts to show that human tragedy often lurks behind cheap products and services, and the demand for a deal fuels a trade in men and women who are forced to work for little or no money and live in sub-standard conditions, deprived of their freedom.

The adverts trick people into thinking they are going to get a cheap deal on goods commonly funded by modern slavery, such as nail bars and car washes. Once the audience clicks through to the advert the truth is revealed, as they are taken to a landing page – in their own language – featuring stories of real victims of modern slavery who have been supported by The Salvation Army and information on how to be more mindful of the risks.

The campaign concept has been created by the Swedish Agency House of Friends. ‘In an unique and powerful way the campaign is strongly focused on increasing the awareness and stopping the demand of modern slavery and the recruitment of victims,’ says Lars Beijer, a representative from The Salvation Army’s European Communication Network.

‘We need to stop using these services and take responsibility for what we use,’ adds Madeleine Sundell, an anti-trafficking lawyer for The Salvation Army in Sweden, one of the countries which has spearheaded and part-financed the campaign. This is the first time that Salvation Army anti-trafficking practitioners have joined forces with their Communications colleagues on a Europe-wide basis.

The precise implementation of the campaign varies from country to country, to remain sensitive to the local needs and context. Examples of the way the campaign is being used can be seen at highcost.salvationarmy.org. In the Latvian capital Rīga, thanks to support from JCDecaux, a large number of posters have been installed on bus stops, ensuring that anyone using the public transport network is confronted with the messaging. Meanwhile in Finland, members, employees and supporters of The Salvation Army have been provided with resources to help them identify the sometimes-subtle signs of trafficking, ahead of a two-week public roll-out in September. The campaign will run for three years, with planning for 2020 already underway.

Salvationists and friends in all 131 countries in which The Salvation Army operates are invited to take part in the International Day of Prayer for Victims of Human Trafficking. This year the event takes place on Sunday 22 September. Information and resources are available at sar.my/aht.