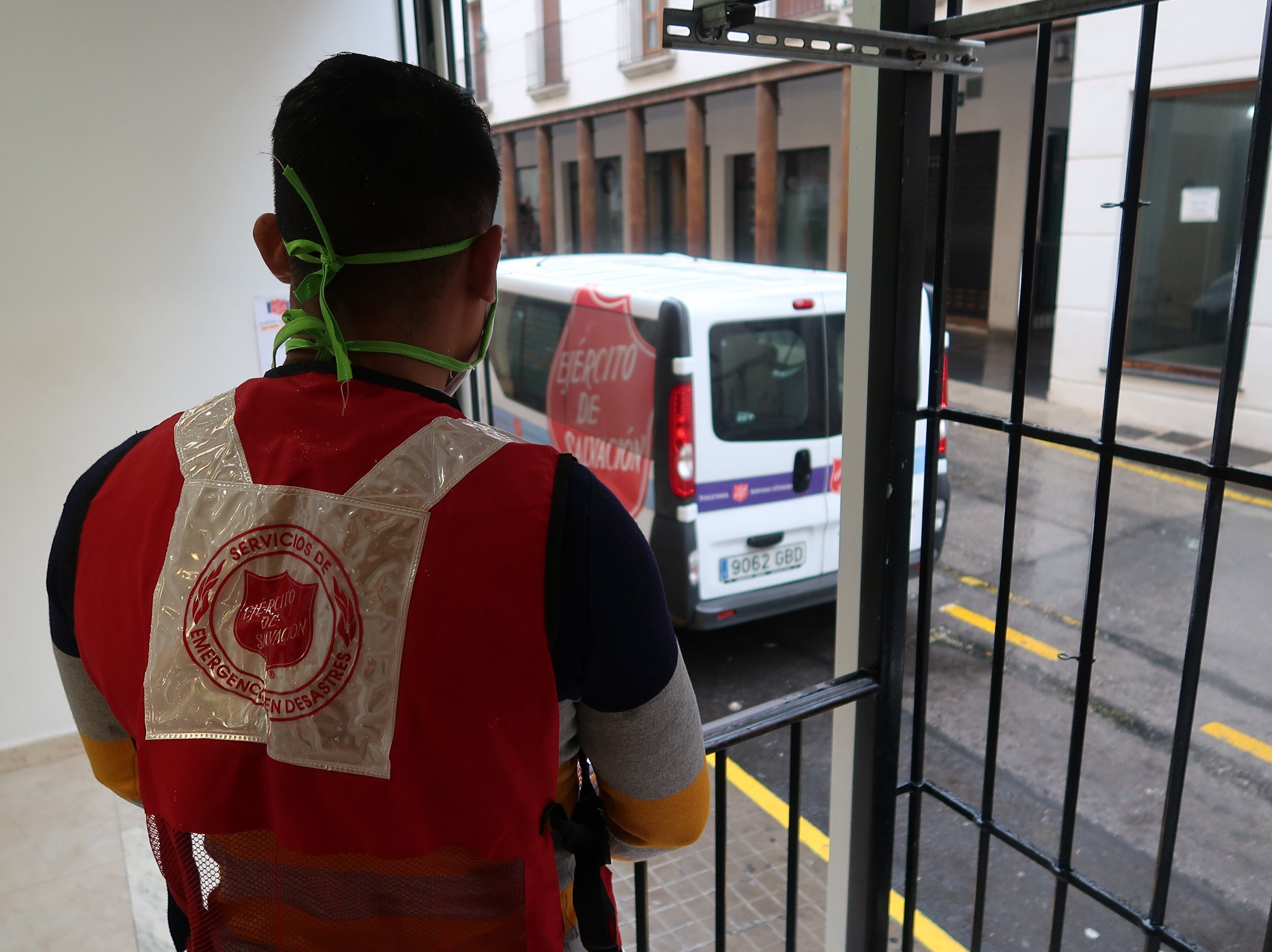 WITH 182,470 reported cases of coronavirus COVID-19 in the European Union, European Economic Area and the United Kingdom*, The Salvation Army across Europe is mobilising to ensure the needs of the most vulnerable people continue to be met. While this is taking different forms depending on local requirements and in compliance with all national and regional ordinances on hygiene, social distancing and travel, examples of the work being undertaken include:

In the Czech Republic, contingency plans are seeing Salvation Army homeless hostels remaining open 24/7, in order to ensure that residents are not putting themselves or others at risk through unnecessary social interaction.

Kindergartens run by The Salvation Army in Finland are operating under the direction of the national government, and are providing care for the children of families whose parents work in key areas such as social work, healthcare, fire, rescue and other essential services.

Retirement homes operated by The Salvation Army in France have remained open, but visitors have been prohibited. In order to enable residents to continue to talk to their families, new tablet devices and WhatsApp have been made available.

Homeless shelters funded by the French government had been due to close by the end of March, but a two-month extension has been agreed in order to help control the spread of the pandemic. Food provision continues in Paris, including a mobile breakfast distribution and an evolving format for hot dinner distribution near Place de la République, where recipients receive packaged food but are mandated to practise social distancing.

Young people connected with The Salvation Army in Samgori, Republic of Georgia, have been distributing care packages to older people in their community.

In Dresden, Germany, the city council has placed vehicles and drivers at The Salvation Army’s disposal in order to deliver food to homeless people. Disinfectant liquid is being distributed alongside food parcels in locations such as Bielefeld, in order to help improve hygiene. Creative approaches are being deployed to help families, such as a corps playground being opened to one family at a time. A children’s outreach team that usually uses drama as part of its programme has now made material available on Spotify for children and their families to engage with at home. 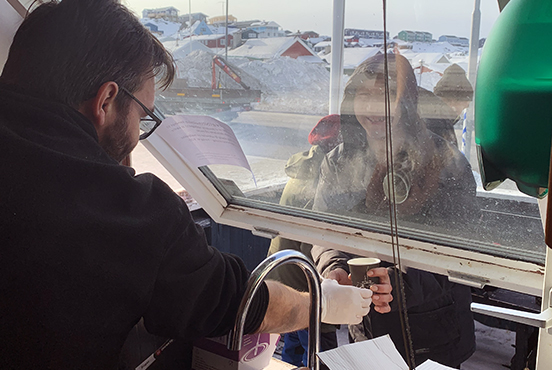 The Salvation Army in Greenland is partnering with Kofoed Skole and the Sermersooq Municipality to achieve a holistic response to the threat of coronavirus. Because of the rules on social distancing, The Salvation Army’s Williams Café has adapted its method of delivering hot meals to Nuuk’s homeless population – now served through the kitchen window. Hats, mittens, scarfs and socks are being provided in addition to the food wherever possible. The combined response team is coordinating to provide tented accommodation for approximately 80 homeless individuals, once local authority workers have ploughed away the snow. The situation is compounded by further heavy snow forecast and even daytime temperatures being well below freezing.

Italy has been the epicentre of the COVID-19 crisis in Europe – particularly since the number of fatalities exceeded that of China. The Salvation Army’s efforts to continue serving vulnerable members of society – particularly in Rome and Milan – have been featured on national television. Dr Simona Magazzù (Deputy Director and Head of Social Programme) explained how online programmes and activities have been launched to help residents of the organisation’s Virglio Paglieri centre combat the stress and isolation of being restricted to their rooms. Meals are being delivered to residents’ own rooms three times a day, in order to restrict unnecessary social contact.

A temporary day and night shelter for homeless people was reopened in just two days by The Salvation Army in Rotterdam, The Netherlands. The centre will support up to 30 homeless people until at least 6 April 2020. Manager Siemen van der Net explains: ‘From Wednesday afternoon [18 March] it became clear that an extra facility was needed and it was decided to reopen De Steiger. We set up a complete facility in two days and are now working with all our might to guarantee care and shelter for the most vulnerable residents of Rotterdam. We are very grateful for the efforts of our employees who all go the extra mile in this crisis situation.’

In Almere, Salvation Army teams are driving around the neighbourhood in an SRV bus. This mobile grocery shop serves elderly and disabled people. Meanwhile, in Deventer, fruit and vegetables donated by a local childcare centre are being distributed to vulnerable people. And in Wageningen, coffee and lemonade are being served from an open space opposite the Salvation Army’s centre.

The Salvation Army in Norway continues to meet needs in Oslo, where a mobile canteen has been deployed to distribute food to everyone in need. ‘We see this is a very demanding situation for many,’ says coordinator of the intervention group, Major Knut Haugsvær. The canteen is providing sustenance for 100 families and individuals each day, and the major observes that new groups are coming forward for help. ‘We may be used to seeing people from the street community come to get food bags, but today I especially noticed a man who came with his child on his arm to ask for food.’ The service is being bolstered by the provision of a telephone service for people to call for information and help.

Elsewhere in the country, The Salvation Army in Rodeløkka has initiated Project Food for All, which will deliver food in several districts and provide a ‘to go’ option three days a week where people receive food bags from the door. Food is also being distributed to vulnerable households in Harstad, Kongsvinger, Langesund, Larvik, Lillehammer, Trondheim, Moss, Kristiansand and Tromsø.

In Lisbon, Portugal, The Salvation Army’s overnight homeless shelter is being converted into a 24-hour shelter, in conjunction with local authorities as part of the national government’s plan to protect the homeless population. This will reduce unnecessary movement throughout the city.

Salvation Army volunteers in Dénia, Spain, are continuing to provide emergency food to at-risk groups in the city, on a take-out basis. Due to a severe shortage of protective equipment, they are improvising with plastic bags rather than gloves on their hands.

Extensive operations are underway in Sweden to meet growing needs as a result of COVID-19. The Salvation Army’s Kåren Temple in Stockholm has adapted its provision of breakfast and hot coffee for its vulnerable service users, so that pre-packaged sandwiches can be taken away instead. Grocery supplies are also being provided. The Salvation Army’s extended provision of emergency accommodation – so that service users can adhere to the government’s minimum 14-day period of self-isolation – continues. Centre manager Sonia Fållsten explains: ‘Many homeless people are very stressed now and feel that they are not getting information. Many of the people we are seeing are elderly and sick. That everyone is now guaranteed a place for at least two weeks is reassuring news.’

Netz4, Chrischtehüsli and the Evangelical Methodist Church have joined forces with The Salvation Army in Switzerland to help ensure the containment of the coronavirus while also providing people at the margins of society with the vital support that they need. One practical way in which this is happening is the daily provision of a warm takeaway meal from a safe location in central Zürich. Pastoral support is being offered by a special phone line that has been set up, and is operating afternoons and evenings, Wednesdays to Saturdays.

A new corps (church) plant in Kalmar has offered assistance to community members affected by coronavirus, but has also been encouraged by offers of help and volunteering from people previously not known to the team.

The Salvation Army in Sheringham, United Kingdom, has praised the generosity of people donating to its food bank. Corps officer Major Alex Bishop told the North Norfolk News that the coronavirus crisis had led to a large increase in requests for help, with volunteers busy packing emergency boxes for older people and needy families. But in Keighley, donations are still urgently required, as the movement switches from a collection to a delivery model. Usually in the Yorkshire town 30 parcels a week are distributed, but in the past week that figure increased to 50 – and the total is set to continue rising, according to a report in Keighley News. ‘The foodbank will operate throughout these difficult times, but we still need people’s support,’ said Captain Josh Selfe.