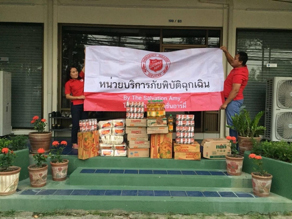 THE Salvation Army’s work in Burkina Faso and Gabon formally commenced two years ago, and the movement’s exploratory ministry in northern Thailand is still not yet officially recognised. But COVID-19 responses are now underway in all three of these countries, as well as many more with a longer-established Salvation Army presence. Each response is culturally appropriate and carefully designed to meet the specific needs of communities in these days of great need, in coordination with relevant governments, local authorities and other agencies, to ensure that nobody is missed.

In Burkina Faso, hygiene supplies of handwash and soap have been transported from the capital Ouagadougou to The Salvation Army’s Bobo-Dioulasso Corps ­(church) – some 300 kilometres distant. In this community, the local markets have closed, leading to financial hardship for the individuals reliant on this trade. The supplies will be distributed to the most vulnerable people, in liaison with the mayor’s office.

Families in six of the most impoverished suburbs of Brazzaville, Republic of the Congo, are being supported with emergency Salvation Army food parcels of rice, saltfish, beans, sugar, oil and powdered milk. The loss of employment because of coronavirus restrictions is widespread, and starvation is a very real risk. Approximately 1,580 recipients will also benefit from hygiene supplies such as bars of soap and plastic bags to safely remove potentially-contaminated waste.

Gabon was one of the earliest countries in Africa to record a confirmed case of COVID-19, and The Salvation Army is supporting the World Health Organization’s efforts to curtail the spread of the virus throughout a particularly susceptible community. Plans are in progress to distribute soap, hydrochloride gel and disinfectant to 300 vulnerable families in Libreville (1,800 men, women and children), along with buckets and hygiene information leaflets.

Radio broadcasts are being used by The Salvation Army in Malawi to share important disease prevention messaging, in conjunction with the country’s Ministry of Health. This means of communication – bolstered by a poster and leaflet campaign – will ensure that information gets to hard-to-reach vulnerable groups, such as people who live in the slums, migrants and homeless people. At the same time, around 2,250 of the most vulnerable individuals in Blantyre will receive food packages and soap. A number of 20-litre buckets with integral taps will also be distributed to strategic locations.

Food relief is being provided to families in the Babu Patel locality in Jinja, Uganda. With the majority of the 5,000-household community having little or no income and nothing in the way of financial reserves, the COVID-19 crisis is giving rise to malnutrition. Having identified the 1,000 most-vulnerable families, The Salvation Army is providing maize flour, beans and cooking oil. Hygiene and healthcare information is also being distributed.

Also in Uganda, a separate project seeks to provide 20,000 bars of soap and hygiene information to vulnerable families in Kizanyiro. This village is the area which has seen the greatest number of suspected cases of coronavirus in the country. Personal protective equipment (PPE) will also be made available in Kawempe, along with sanitiser for the five health centres in the division and for the five local council officers. Handwashing stands and large buckets are also being provided in these locations.

The southern hemisphere’s most populous city, São Paulo in Brazil, has a significant homeless community. The Salvation Army has been approached by the city’s civil defence administration to help meet the needs of this vulnerable group. The local authorities are opening shower blocks, portable washbasins and toilet facilities, and low-cost restaurants are still available in some parts of the city. However, The Salvation Army will be stepping into the gap and providing hot meals and snacks for around 75 people every day who are unable to access these. This meal provision is for an initial period of two months.

The Salvation Army in São Paulo is also undertaking a daily distribution of hygiene kits among the city’s street dwellers, numbering 3,200 in all.

Around 21,000 people are being supported with the provision of handwashing facilities and disease prevention advice in Haiti. A new water reservoir is being installed in Couyot, where The Salvation Army has an established health clinic which serves the Western District. This will be equipped with public hand basins. The Salvation Army’s healthcare facilities on the island are working with the government health agency to implement a preventative plan aimed at reducing human-to-human contact, by communicating basic information and training influential people in the community.

In the USA, which is currently marking National Volunteer Week, The Salvation Army in San Francisco is deploying large teams of helpers to provide hundreds of unsheltered people with pre-prepared meals. These are delivered to more than 40 outdoor locations across the metropolitan area every day.

In Greater New York, The Salvation Army’s volunteer team has also swelled by nearly 1,500. The movement has partnered with the Port Jervis City School District to feed children who are in need of breakfasts and lunches while remote schooling during the pandemic. Meanwhile, food distribution continues across New York City, with social distancing and other hygiene measures applied to ensure safety of service users and team members. One recipient in the Bronx, Eduard, said: ‘I know The Salvation Army will help me whenever I need some help. We come here and ask if there’s any food at all, and they’ll do whatever they can for us. I’m surprised to see that they’re still serving the community because of the virus, but I’m very grateful for that. This place is like a home away from home.’

Even the far-flung Færoe Islands are grappling with the effects of COVID-19, with 187 cases confirmed in the north Atlantic archipelago. Mercifully, there have been no deaths here, thanks ­– in part – to the repurposing of a salmon testing laboratory, remote location and swift lockdown action by Prime Minister Bárður á Steig Nielsen. The Salvation Army’s shelter in Tórshavn has become the central food distribution point for people in need across the islands

In Reykjavík, Iceland’s capital, there has been high demand from the public for food, and The Salvation Army has handed out bags and gift certificates for grocery stores. There has also been a telephone service for people who are afraid or lonely. Young people from disadvantaged families in the northern town of Akureyri have had extra challenges in these days, so the local corps has facilitated special gatherings for them – with appropriate social distancing.

The Salvation Army in Slovakia is meeting the needs of a largely Roma population in Pezinok and Plavecký Štvrtok. Face masks have been sewn locally to meet demand, and food assistance is being provided to around 140 people, on a door-to-door basis. Miňo Krajcovic, who is responsible for The Salvation Army’s work in Pezinok, says: ‘The challenge here for these people who want to move on in life is that they have little support. That’s where The Salvation Army comes in. We’re part of this community, and we will do whatever we can to help people back to their feet, even in these extremely difficult times.’

In Spain, The Salvation Army’s Madrid Central Corps is running a food distribution programme for people in extreme need. The team is also distributing food to the homes of elderly people as well as those sick with the virus. Spiritual support is being offered where appropriate.

An agreement has been reached with the Food Bank of Madrid, such that Madrid Central Corps will become the primary organisation for the distribution of food in the Salamanca neighbourhood. This is a milestone thanks to the service that has been provided to the community by The Salvation Army for many years, and a recognition for its work at this time.

In Chandigarh, northern India, The Salvation Army – in coordination with the local government and other humanitarian agencies – has identified 1,725 families (approximately 6,900 men, women and children) in particular need of food support. A programme of distribution will begin shortly, with food parcels containing quantities of rice, pulses, wheat flour, cooking oil and salt. Hygiene advice will be provided, and each beneficiary will also receive soap.

A Salvation Army response in Sri Lanka is providing 1,600 families with soap, laundry liquid and handwashing materials – the recipients being verified as vulnerable individuals by local authorities. This is in addition to an emergency feeding programme that is ensuring 100 of the most at-risk people receive a hot meal daily for at least 20 days. (Provision of meals to 1,600 vulnerable families continues as previously reported.)

Malaysia is on nationwide lockdown with all educational, sports, cultural and religious programmes halted for at least two weeks. Salvation Army social centres have introduced precautionary measures such as daily temperature checks, recording of names for contact tracing, and robust handwashing and cleaning regimes. The Salvation Army has made a public call for donations of masks, sanitiser and other hygiene necessities, ahead of a planned distribution of these products to the most vulnerable in the community.

In Melaka, the corps officer (church leader) and team have developed a makeshift kitchen and started delivering cooked food around the neighbourhood.

Across in the capital, Kuala Lumpur, Salvation Army teams have obtained special clearance to pass through roadblocks in order to distribute food parcels to scattered vulnerable families, especially for the many migrant workers and refugees without a robust income stream. The police have provided an escort and security to The Salvation Army’s volunteers. So far, 2,200 meals have been served, and 500 food parcels and 2,500 masks were distributed.

Health care is a focus for The Salvation Army in Myanmar, where the majority of patients suspected of having COVID-19 are being brought to the former capital, Yangon. Testing kits have only recently become available in the country, but detected cases currently stand at 123.

Schools in the city have been requisitioned as clinics in order to host the influx of seriously ill people. The Myanmar Council of Churches received a request from the government to assist with the treatment costs for patients. To date, The Salvation Army has met the costs of 20 of the patients, including the provision of blankets and food for these individuals. A further 500 vulnerable families will shortly receive care packages of 10kg each of rice and dhal, in order to meet daily needs.

In the city state of Singapore, The Salvation Army – through its migrant workers ministry, The Sojourn Programme – is in coalition with other partner organisations in distributing PPE and other hygiene necessities to immigrant workers during this difficult time.

Although The Salvation Army’s fledgling work in Thailand is yet to be officially registered, the pioneer team is playing an active part in the coronavirus response in the northern city of Chiang Mai. The Salvation Army has responded to a call from the city’s governor to provide meal assistance to a centre which is affording care to individuals who have tested positive for COVID-19. Salvation Army officers and staff are also providing support to frontline workers, including the distribution of face shields to three hospitals and a police station. Food parcel distribution to vulnerable communities has been undertaken too, ensuring a supply of dry food, hand sanitiser and bottled drinking water.