Salvation Army Mounts Immediate Response to Flooding in The Philippines 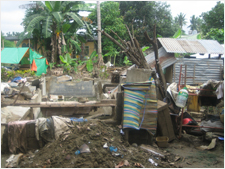 THE Salvation Army in The Philippines is responding to the flash flooding that brought devastation to the island of Mindanao on Satuarday 17 December. The floods hit just after midnight, catching many people sleeping. More than 1,000 people are known to have died in the cities of Cagayan de Oro and Iligan. It is currently estimated that 100,000 people have been displaced as a result of the flooding, with many in need of urgent assistance.

Local Salvationists – many of whom were themselves victims of the flooding – are distributing food and bedding. Following an initial assessment of the situation, plans are in place to increase this assistance to help 5,000 families.

Staff from The Salvation Army's The Philippines Territory and a representative from International Emergency Services, based at International Headquarters in London, are travelling to the disaster area to conduct further assessments which will enable plans for ongoing work to be developed.