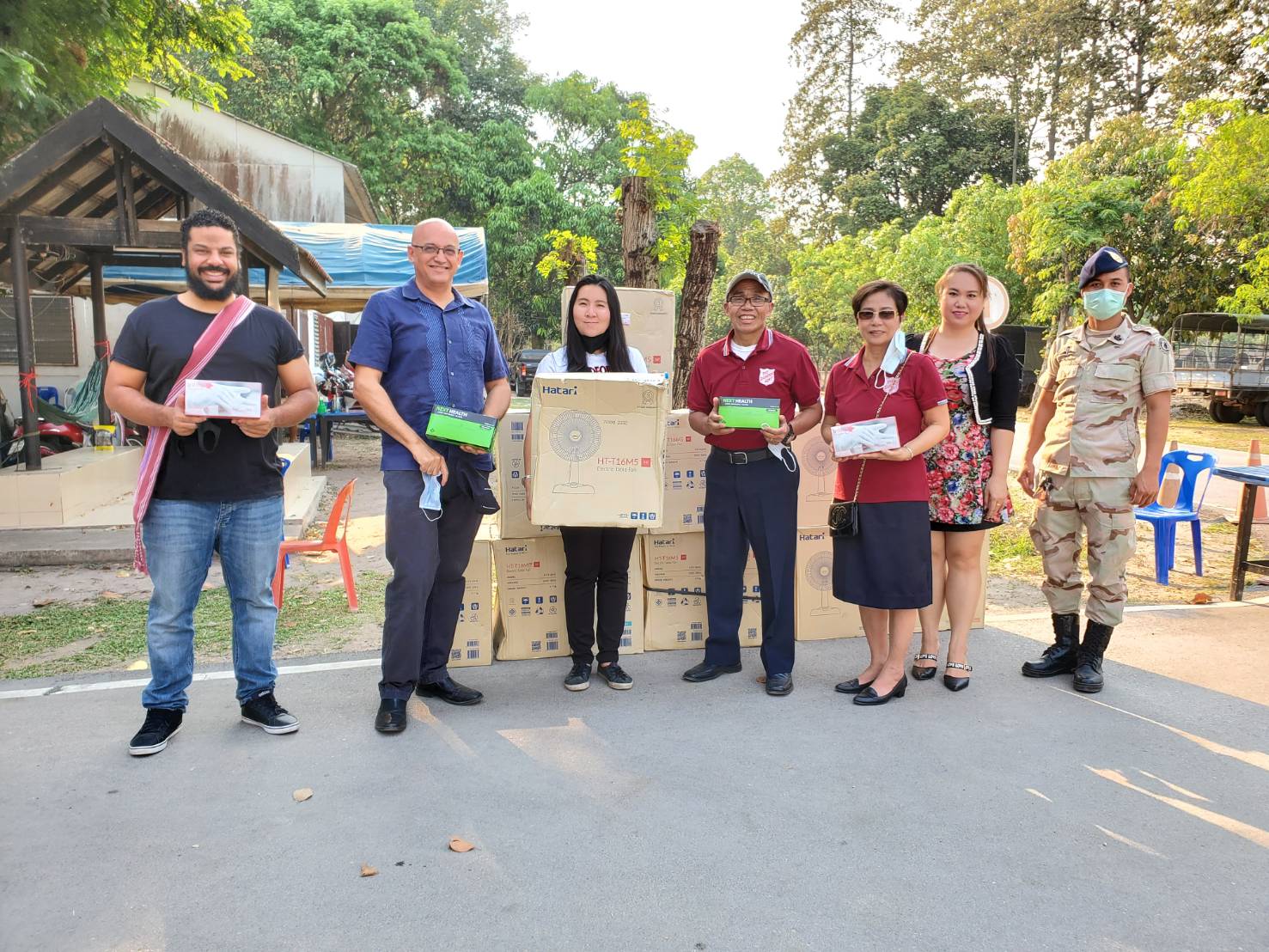 AROUND the world, The Salvation Army continues to respond to human needs resulting from the COVID-19 pandemic. The nature of the responses varies from location to location, depending on local needs and context. Whether a large-scale feeding programme providing food for thousands of people, or a smaller community-based initiative addressing hygiene and sanitation, one thing is consistent: the love and care with which individuals are treated.

In the USA, where one in six of the population was living in poverty even before coronavirus struck, The Salvation Army has served more than 6.5 million prepared meals to community members affected by COVID-19. On top of that, around 1.8 million food boxes have been distributed, with each box representing 20 individual meals. As well as this, the equivalent of more than one million nights of shelter have been provided, and emotional and/or spiritual care offered on request to more than 600,000 people. In many states, childcare is being provided for essential frontline workers, showering facilities have been created in major cities such as New York, and young people have been offered virtual programming and ‘at home’ day camp kits to provide meaningful activities during lockdown.

A partnership with the LDS Church has been particularly fruitful, bringing not just substantial financial support but also vital personnel reinforcements. Teams from both The Salvation Army and LDS Church have been working together in numerous locations across the US, all with the shared aim of meeting human needs with compassion and sensitivity.

Major corporations have also generously supported The Salvation Army’s COVID-19 response across the US, with financial donations and gifts in kind. Car manufacturer Toyota has granted The Salvation Army $700,000 towards emergency responses in Atlanta, Chicago, Detroit, Los Angeles, New Orleans and New York City. Airlink – a non-profit organisation supported by US aviation and logistics companies – partnered with The Salvation Army in order to provide staff and volunteers with 150,000 facemasks.

Ryerson Lundy, a start-up business owner in Evanston, Illinois, gave 100 per cent of profits from her bracelet sales to the local Salvation Army food pantry. Remarkably, the entrepreneur concerned is aged just six years old. ‘Ryerson learned how to make rubber band bracelets a few months ago and she thought starting a business to raise money to help others during COVID would be a good thing to do,’ explains her father, Thackston Lundy. He and his wife, Christy, suggested their daughter consider donating the money to a local organisation providing food to those in need during the pandemic. ‘The Evanston food pantry was an obvious choice!’

‘We are so grateful to Ryerson and her family for this wonderful gift to The Salvation Army Evanston Corps Food Pantry. It will go a long way in helping the most vulnerable right here in our community,’ responded Captain Mary Kim.

In the Turks and Caicos Islands, the Coca-Cola Company has provided much-needed support to The Salvation Army, which is partnering with other agencies on the Caribbean islands to secure essential food and hygiene support. Hundreds of families and individuals have been affected by economic hardship resulting from the pandemic, and the provision of food, drink and cleaning supplies has been appreciated.

Salvation Army colleagues in Antigua benefitted from a share of a donation of 80 dozen eggs, thanks to local producer Hill Valley Farms whose director wanted to ‘give back to the community in need’. The freshly-laid eggs were distributed to vulnerable people on the island, in partnership with the Lions Club of Antigua and other local organisations.

Government partnerships have been strategic in The Netherlands where, following campaigning by The Salvation Army and other organisations at the commencement of the coronavirus crisis, a commitment to spending more than €200 million on additional sheltering for homeless people has been made. A further agreement for 10,000 extra places for homeless people to live will be realised by January 2022. Dutch society has also helped The Salvation Army through the donation of hygiene kits for distribution among the homeless community. As well as this, partnerships with tech companies have enabled Salvation Army personnel to provide tablet computers to many of its service users from difficult family backgrounds – particularly young adults and children. This technology is enabling them to remain in touch and facilitating continued learning during a period in which education has substantially moved online.

The Salvation Army in Thailand has received a formal letter of appreciation from the Royal Thai Army. The team tasked with establishing The Salvation Army in the country has been busy supporting the military to care for those under quarantine regulations in the northern city of Chiang Mai. Priorities have included providing food, water, infection control supplies and equipment, as well as other support to COVID-19 sufferers and first responders in the armed forces.

Elsewhere in south-east Asia, Salvation Army teams from Manila and Quezon in the Philippines have distributed 550 food packs, water and some sleeping mats to stranded overseas workers at the international airport and nearby Villamor Golf Club. These people are waiting for their scheduled journeys to their home provinces and are temporarily sheltering outside the airport and at the golf club due to cancelled flights.

One newly-resourced undertaking in Monrovia, Liberia, seeks to ameliorate the effects of coronavirus on the community right next to its command headquarters. Despite a curfew and prohibition on movement, Salvation Army personnel observed that the number of people on the streets adjacent to its offices was increasing, and that people were setting up stalls to sell produce on the street – there being no other means of them securing sufficient money to subsist.

Around 3,200 individuals in the Sinkor neighbourhood will now receive basic food parcels to ensure a reliable source of balanced meals during this time of lockdown, in order to minimise unnecessary social interaction and thereby stem the spread of the disease. Households will also receive soap and buckets to improve access to handwashing facilities.

Similar intervention is planned for the Sabatia, Gusii and Sondu communities in Kakamega, Kenya. Around 1,500 people – half of whom live in particularly vulnerable family groups – will receive supplies of maize, beans, rice, sugar and cooking oil.

Major Chris Mulryne, The Salvation Army’s International Emergency Services Project and Finance Administrator, says: ‘We are grateful to our partners right around the world who are helping to meet needs on a scale that we have not seen before. Behind the numbers are individual men, women and children who are suffering, and often feeling desperate. It’s our responsibility to serve them in their time of need, and it’s an honour to do so. But we cannot do this on our own – we are indebted to all those who support our work practically and financially. Thank you.’