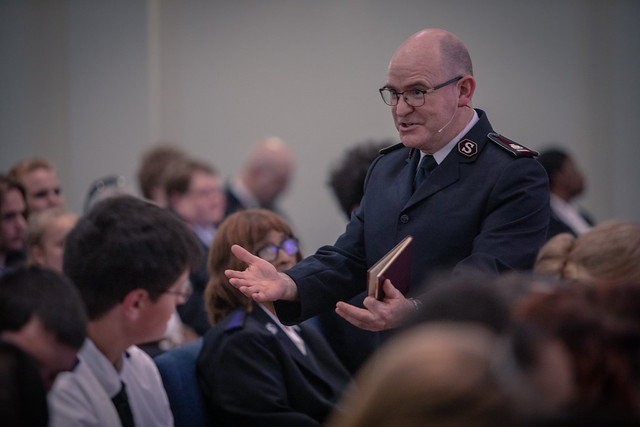 THE visit to the USA Southern Territory by the Chief of the Staff (Commissioner Lyndon Buckingham) and Commissioner Bronwyn Buckingham (World Secretary for Women’s Ministries) began in Birmingham, Alabama, with the international leaders participating in a quarterly meeting of The Salvation Army’s USA National Advisory Board. The meeting coincided with the Birmingham Area Command Annual Dinner, attended by more than 500 local supporters of The Salvation Army.

In his dinner address, the Chief of the Staff spoke of how the advisory board event had really energised him and Commissioner Bronwyn, highlighting the importance of advisors to the Army’s mission. Describing them as people of sincerity, passion, commitment, integrity, expertise and intelligence, he paid tribute to all Salvation Army advisory board members and other volunteers. He especially thanked advisory board members for their wisdom in understanding the challenges of today so they can guide the Army in meeting needs in Christ’s name without discrimination. He called for all believers to ‘look up!’, fixing their eyes on Jesus.

At the ALM (Alabama, Louisiana and Mississippi) divisional soldiers rally in Jackson Citadel, Mississippi, music and creative arts were mixed with prayer and testimony. The Chief and Commissioner Bronwyn enthusiastically enrolled 15 junior soldiers and 21 senior soldiers.

In his address, the Chief of the Staff challenged the congregation with Paul’s call to the Church to grow its reputation as a model and example to the world. Inspired by the message, people responded to the call of Christ on their lives.

‘The World for God’ – a meeting held in Atlanta, Georgia – was attended by Salvationists and friends from Georgia Division, along with staff and officers from territorial headquarters and Evangeline Booth College, and cadets from both training sessions.

The Chief of the Staff shared news of the ‘state of the Army’ across the 131 countries in which it works. Commissioner Bronwyn shared Scripture and, in her testimony, highlighted the vision and planning for greater ministries for and by women worldwide.

A composite band, timbrel brigade, and songsters blessed those present, and the Holy Spirit descended as the Chief of the Staff spoke of capturing the ‘essence’ or ‘aroma’ of Christ in this challenging world. ‘It’s the aroma and fragrance of Christ that we Salvationists need to obtain,’ he said. ‘You are to be that aroma of Christ in your community. Be the flavour of God in the world!’