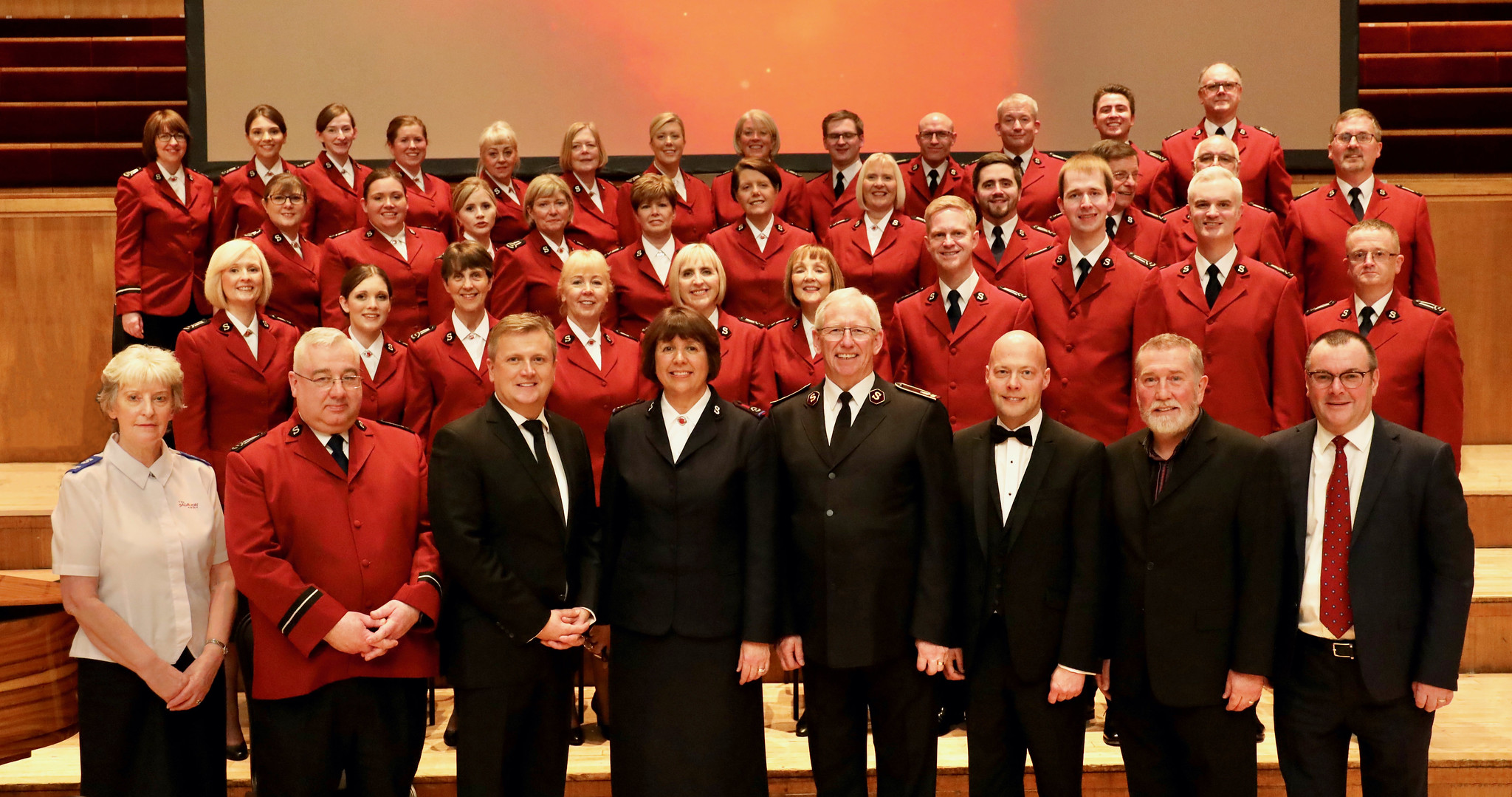 Following an introductory video showing clips of the ISS through the years, former members joined the current group for the opening pieces: Richard Phillips’s exuberant arrangement of Psalm 95, ‘Sing for Joy’, and the reflective ‘Christ of Calvary’, arranged by the group’s first leader, Norman Bearcroft.

Commissioner William Cochrane (Territorial Commander, Norway, Iceland and The Færoes) recalled his time as the ISS executive officer before introducing classical singer and national broadcaster Aled Jones, who guided the rest of the programme through. He also delighted the audience by singing ‘The Lord is my Shepherd’ – accompanied by a recording that featured himself as a 12-year-old choirboy and his son, Lucas, now also aged twelve.

Robert Clark, a former staff songster pianist who is Head of Music Staff for the Royal Ballet, played excerpts from Rachmaninov’s ‘Rhapsody on a Theme of Paganini’ before Jacqui Proctor, a founding member of the ISS, shared memories of the inaugural festival, which took place in the same venue in March 1980. She made special mention of Lieut-Colonel Norman Bearcroft and the first executive officer, Colonel Kenneth Bridge.

The festival was titled A Choral Symphony because the main feature of the evening was the performance of four choral symphonies written for the ISS over recent years by Stephen Pearson (lyrics) and Richard Phillips (music). This was the first time the four works had been presented in one programme, with the London Mozart Players providing orchestral accompaniment on this occasion.

After the third symphony Aled Jones briefly interviewed Stephen and Richard, who gave insights into the inspiration for the pieces and the process of writing them.

The ISS was joined by former members, some members of the Amsterdam Staff Songsters and by songsters from a number of corps (churches) attended by current members for a moving rendition of ‘More than Wonderful’, arranged by former leader Major Len Ballantine.

The General thanked Staff Songster Leader Dorothy Nancekievill and the songsters for an evening in which they had shared ‘words of grace’ that had stirred people’s emotions and challenged their hearts. He also congratulated the ISS on its 40th anniversary, acknowledging the group’s service as a response to ‘a holy calling’.

Referring to the worldwide ministry of the staff songsters, the General said: ‘It’s not always about them being there. It’s the influence of their music, their message and their standard of excellence.’

The ISS reaches thousands of people every year through concerts and via TV and radio appearances. They have sung in a huge variety of locations, from cathedrals, community halls, slums and squatter camps to huge concert venues such as the Royal Albert Hall. They have ministered at Salvation Army halls across the United Kingdom Territory with the Republic of Ireland, and tours have taken them to the United States of America, Canada, Argentina, Uruguay, Scandinavia, Estonia, South Africa, Zimbabwe, Kenya, Australia and New Zealand.

Speaking about the spiritual impact that music can have, shining light into the darkness of people’s lives, the General challenged the ISS to ‘keep singing out the message of the gospel’, and extended that challenge to everyone present.

The message of the gospel featured in the festival’s finale, the fourth choral symphony ‘A Symphony of Life’, which received a standing ovation.

Executive Officer Lieut-Colonel Jayne Roberts offered words of thanks and a benediction before the ISS and former members brought the evening to a prayerful conclusion with John Rutter’s ‘The Lord Bless You and Keep You’.

The next day the ISS led Sunday worship at Croydon Citadel.