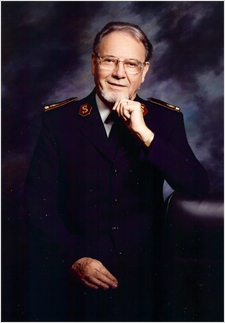 GENERAL John Gowans was promoted to Glory from a nursing home in South London today, 8 December 2012, at the age of 78, after a long period of declining health.
General John Gowans, The Salvation Army’s international leader from 1999 to 2002, will be remembered for the unique, colourful and larger-than-life personality that he was. ‘When God made John Gowans he threw away the mould,’ writes General John Larsson (Ret.) in his foreword to General Gowans’s autobiography. ‘Into the gift-mix of this original he poured the potential of an unconventional thinker, an arresting speaker and a charismatic leader. He added the dynamism of a man of action and the creativity of a poet, the ruggedness of an Elijah and the spiritual sensitivity of a John the Beloved. And he topped it all with a large dollop of humanity!’
These qualities marked his term of office as General. He was passionate about the Army’s fundamental mission, memorably defining it as ‘saving souls, growing saints and serving suffering humanity.’ He boldly reformed the conditions of service for officers, in the process surveying every officer in the world. He markedly widened the advisory circle to the General by creating the General’s Consultative Council. He unfailingly challenged his hearers around the world through messages that were vivid, pointed and prophetic. No one present at the International Millennial Congress 2000 held in Atlanta, USA, will ever forget the impact of his inspired preaching on that occasion.
A priceless legacy General John Gowans leaves us are the more than 200 songs he wrote, many of them originating in the ten musicals he co-authored with General John Larsson. These songs continue to speak to hearts and minds wherever they are sung around the Army world. His ministry will also live on through the three books of prayer poems he wrote under the title O Lord, which so clearly reveal his gifts of insight, warmth and humour. In retirement, General Gowans reached and influenced thousands by authoring Words of Life for several years.
John Gowans was born in Blantyre, Scotland on 13 November 1934, of officer parents. He entered the International Training College, London, in 1954 as a cadet of the ‘Soulwinners’ session. There he met Cadet Gisèle Bonhotal, who had entered training from Paris, and they married in 1957. John and Gisèle became parents of two sons, John-Marc and Christophe, and there are now four grandchildren.
John and Gisèle Gowans served as corps officers in the then British Territory for 16 years, held administrative appointments in their home territory and also in the USA Western Territory, and were divisional leaders in both of these territories. They served for eleven years in France, in time becoming the territorial leaders. This was followed by territorial leadership of the Australia Eastern and United Kingdom territories.
Details of the funeral and thanksgiving service has now been announced.
We thank God for giving the Army the gift of John Gowans. Our thoughts and prayers are now with Gisèle and the other members of the family.
Commissioner Barry C. Swanson
Chief of the Staff
Tags: News