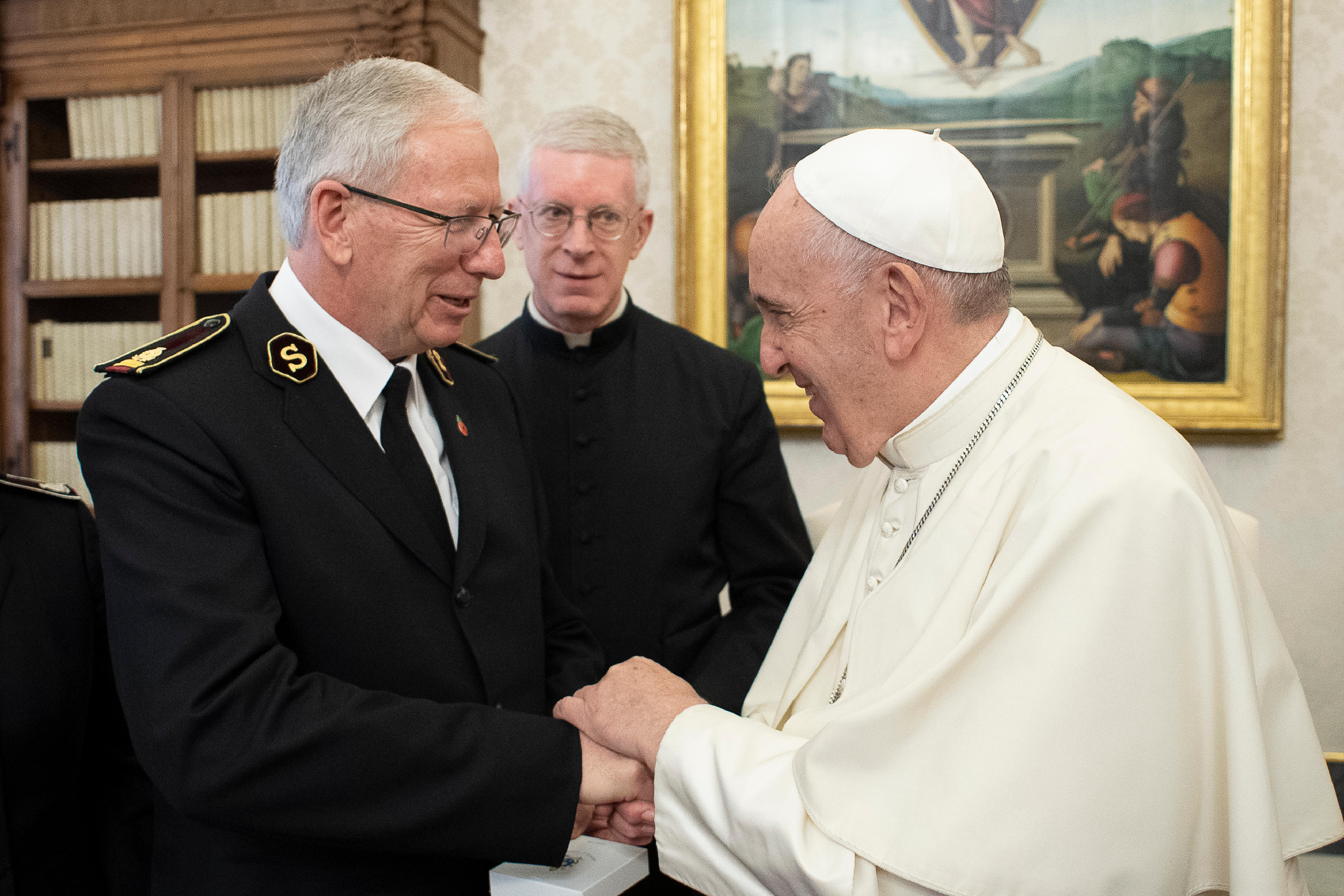 GENERAL Brian Peddle and Commissioner Rosalie Peddle visited the Vatican today for conversation with His Holiness Pope Francis. During the visit, the accompanying delegation – Commissioner Betty Matear, Secretary for International Ecumenical Relations, Lieut-Colonel Massimo Tursi, Officer Commanding Italy and Greece Command and Major David Williamson, Private Secretary to the General – met with Cardinal Koch, Bishop Farrell and Father Avelino Gonzales of the Pontifical Council for the Promotion of Christian Unity. In a warm and open discussion the prospect of continued conversations was discussed and General Peddle underlined the areas where The Salvation Army and the Roman Catholic Church share common challenges in the mission to the poor and marginalised. The discussion focused on effective mission and evangelism and serving suffering humanity.

Following a profitable time of sharing, the delegation then had an opportunity to meet with Pope Francis in the Papal Library. The General had a time of private conversation before the Salvation Army representatives were presented to Pope Francis. General Peddle presented his message and Pope Francis responded. The General then prayed with the Pope.

During the visit, The Salvation Army delegation was given privileged access into the Sistine Chapel and St Peter’s Basilica.

It is intended that beyond this historic visit there would be a series of meetings, which will strengthen relationships and cooperation in areas of mutual concern and service.

From a report by Commissioner Elizabeth Matear

I am happy to have this opportunity to renew to you and to all the members and volunteers of the Salvation Army my grateful appreciation for the witness you give to the primacy of discipleship and service to the poor. This makes you an evident and credible sign of evangelical love, in obedience to the Lord’s commandment: ‘Love one another; even as I have loved you, that you also love one another. By this everyone will know that you are my disciples’ (John 13:34).

As I have mentioned on several occasions – and again just now, when we spoke – it was by encountering members of the Salvation Army that I received, many years ago, from my grandmother, my first lesson in ecumenism – I was four years old!. Their example of humble service to the least of our brothers and sisters spoke louder than any words. I am reminded, General, of the insight expressed by your predecessor when we met five years ago: “Holiness transcends denominational boundaries.’ The holiness that shows itself in concrete actions of goodness, solidarity, and healing speaks to the heart and testifies to the authenticity of our discipleship. On this basis, Catholics and Salvationists can increasingly assist one another and cooperate in a spirit of mutual respect and in a life of holiness as well.

Such a common witness is like the leaven that in Jesus’s parable, a woman took and mixed with flour until the whole mass of dough began to rise (cf Luke 13:21). The gratuitous love that inspires acts of service to those in need is not only a leaven; it also has the fragrance of freshly baked bread. It attracts and convinces. Young people in particular need to breathe in that fragrance since in many cases it is absent from their daily experience. In a world where selfishness and divisions abound, the noble fragrance of genuine self-giving love can offer a much-needed antidote and open minds and hearts to the transcendent meaning of our existence.

As the Bishop of Rome, of this Diocese, I would like to thank The Salvation Army for all that you do in this city for the homeless and the marginalised, of whom there are so many in Rome. I am also aware of your significant involvement in the fight against human trafficking and other modern forms of slavery. May God bless your efforts.

Thank you once more for your visit. Let us remember one another in our prayers, and continue to work to spread God’s love through acts of service and solidarity.