Salvation Army in the Solomon Islands Responds to Cyclone and Coronavirus 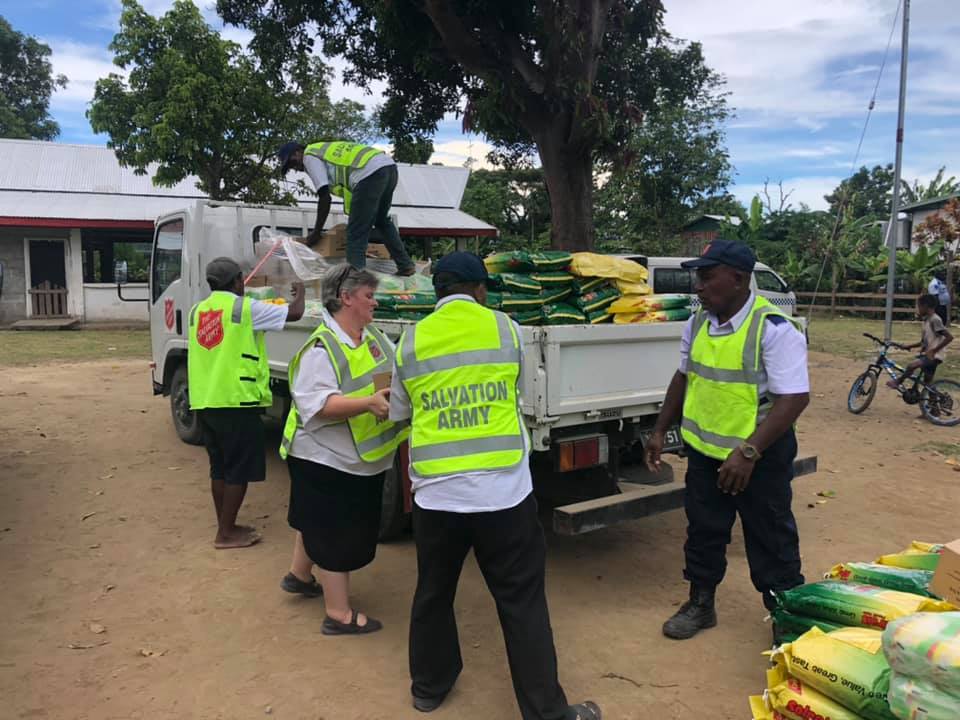 THE Solomon Islands have yet to record a case of COVID-19, but stringent disease control measures are nonetheless affecting islanders – particularly those of limited means. The coronavirus restrictions come in the wake of devastation wrought by Cyclone Harold in April, affecting many homes and livelihoods. The Salvation Army has been working with community leaders and partners in the Burns Creek settlement in East Honiara to ensure food security and mitigate against a rise in crime.

The COVID-19 restrictions closed the market stalls around Honiara and community chiefs expressed ‘deep concern’ about access to food and the potential for destabilisation and illegal activities emerging from worries over how people were going to feed their families. Burns Creek was already a vulnerable community with a history of social unrest, prior to the cyclone and COVID-19 exacerbating the situation.

Regional officer Major Robert Evans says that, following a rapid response grant being approved by The Salvation Army’s International Emergency Services team, a ‘substantial amount of relief to the Burns Creek leaders’ was put in place, supporting a total of 790 families across 16 communities.

‘The funds … enabled us to purchase enough rice and tuna to feed the families for three weeks while they replanted their gardens,’ explains the major. The supplies were purchased from local producers SolRice and SolTuna, who also stepped up to donate additional provisions which enhanced the capacity of the response. Starting in mid-June, The Salvation Army’s local emergency services personnel distributed the weekly allocations of food to each community affected, deploying two three-tonne trucks and supported by the Royal Solomon Islands Police Force National Crime Prevention Department (NCPD).

Around 3,500 cassava stems – a kind of sweet potato – were bought from local farmers to help replace crops which had been lost in the April storm. This was made possible through a generous donation from the Obed Centre, a Christian organisation based in Tasmania, Australia.

‘The response was quite overwhelming,’ admits Major Evans, recalling a number of ‘very kind expressions of appreciation from grateful community leaders.’ But the opportunity to work alongside the NCPD was a ‘blessing that built on the relationship we established with the [police] during the general election last year.’

Expanding on this, Major Evans explains that ‘this partnership had a real impact on those who normally see the police as the enemy in their law enforcement role. Instead, they saw them working alongside a church in a community service role that genuinely cared for their well-being.’

Envoy Wency Ramo’oroa, who lives in one of the affected parts of Burns Creek, shares how the food and agricultural items have made a difference in the community. ‘My community were hopeless, stressed,’ he says. ‘The word going around [now] is about the way The Salvation Army demonstrated love in a more practical way … [and] gave us hope and confidence.’

His words are echoed by village leader Chief Sam Baega, who emotionally described The Salvation Army’s partnership with the Royal Solomon Islands Police as ‘a new dawn’.

Adding his personal thanks, NCPD director Superintendent Solomon Sisimia spoke warmly of the ‘continuous engagement with the community’ and the opportunities that presented for improved relationships between the settlement-dwellers and the police. He added: ‘The community leaders thought that no institution [would] support them during their time of crisis, but thank God for The Salvation Army for taking the initiative.’

Photos to illustrate this story are available via the IHQ Flickr channel at sar.my/burnscreek
Regular COVID-19 updates – including an interactive map, videos and downloadable resources – can be found on our website at sar.my/covid19