The Spirit Moves During Visit of the General and Commissioner Rosalie Peddle to Birmingham Citadel, UK 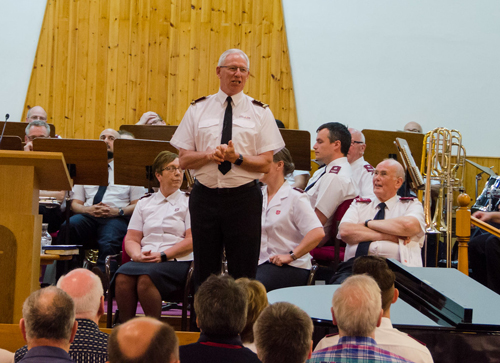 HAVING been special guests at Symphony Sounds, a United Kingdom Territory with the Republic of Ireland music and creative arts event held in Birmingham, General Brian Peddle and Commissioner Rosalie Peddle (World President of Women’s Ministries) stayed in the city for Sunday morning worship at Birmingham Citadel. The visit will be remembered for the friendliness of the international leaders, who mingled with the congregation before and after the meeting, and also for the movement of the Holy Spirit which saw the mercy seat used over and over again.

People arrived for worship, with the hall filling quickly as visitors from other corps (churches) who had stayed in Birmingham overnight came to hear the General preach. More seats had to be brought in from other rooms to accommodate people as they arrived. The young people’s band prepared the congregation for worship with a selection of music.

Corps officers Major Adrian Allman and Captain Clare Allman led the meeting, which included corps members sharing prayer in a variety of languages, reflecting the diverse, multicultural nature of both the city and the corps. The General’s Private Secretary, Major David Williamson, led a children’s spot which included participation by young people, and the singing company, senior band and songsters contributed to worship with well-chosen items.

The General and Commissioner Peddle both spoke clearly and directly to the congregation, with insightful and inspiring words of challenge and testimony.

After the General’s Bible message he led an appeal where it was clear the Holy Spirit was moving through the room. Many people moved forward to pray at the mercy seat, and the murmur of prayers could be heard above the singing of choruses. People continued to go forward – young people taking their friends to pray, parents leading their children – until there was no room at the mercy seat, so people were counselled where they sat in the congregation. Many people were in tears as they sang and prayed, deeply moved by the Holy Spirit and inspired by the General’s words.

At the end of the meeting Major Allman thanked the General and Commissioner Peddle for their visit and offered them gifts which linked Birmingham to Canada, their home nation – Cadbury’s chocolate, which is made a few miles from the hall, and coffee from Tim Hortons, a Canadian restaurant chain which has recently opened a branch in Birmingham city centre.