THE Salvation Army in Argentina is responding after storms and flooding caused devastation around Buenos Aires, with the city of La Plata being particularly badly hit. Latest reports say that 57 people have been killed in the disaster – 51 in La Plata – and that more than 100,000 homes have been made uninhabitable.

The Salvation Army has joined forces with a local food bank to serve the population that is suffering the consequences of the storm, especially in the Villa Elvira neighbourhood, where The Salvation Army was already present.

The Salvation Army property in Villa Elvira has served as an emergency shelter for 100 people since Tuesday 2 April, and 200 people were provided with food. So far, seven tonnes of food and water have been distributed to community members, along with other essentials such as mattresses and bedding. 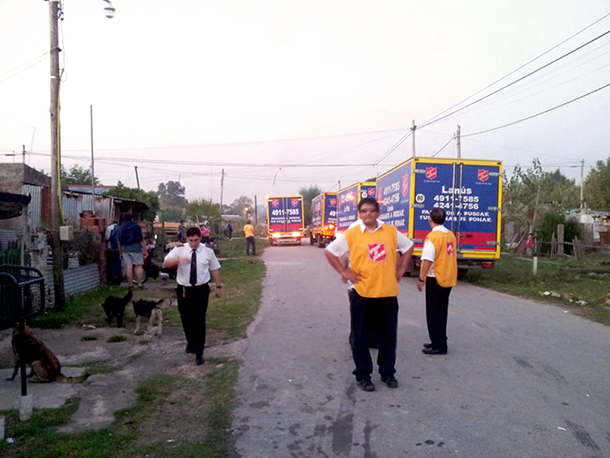 Colonel Susan McMillan (Territorial Commander, South America East Territory) reports: 'The Buenos Aires Divisional Emergency Team is working hard and will continue to do so.' A group of officer-cadets has also helped the team. The colonel adds: 'Communications have been difficult as the area is without power, water, telephone service and even cellular phone service.'

She concludes: 'We would appreciate your prayers for our people – that God would give them wisdom, multiply their resources and keep them safe.'

Donations to support The Salvation Army's disaster response in Argentina can be made online through our secure server. Click here.