Plans Under Way for 2018 High Council 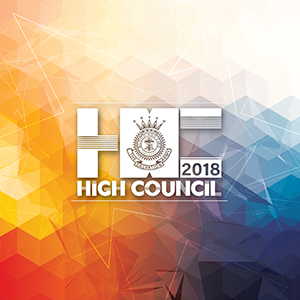 PLANS are being developed for the election of the next General of The Salvation Army, with a view to holding a High Council that will commence on Thursday 17 May 2018. A public welcome to the High Council, which will also serve as a farewell to General André Cox and Commissioner Silvia Cox (World President of Women's Ministries), is planned for Saturday 19 May. This will take place at Central Hall Westminster in central London, a venue which has a rich history of holding significant Salvation Army events. Further details of these arrangements will be released shortly.

A High Council comprises all active Salvation Army commissioners (except the spouse of the serving General), territorial commanders and territorial presidents of women’s ministries. Its sole purpose is to prayerfully elect the next international leader of The Salvation Army, who will assume responsibility when General Cox retires at midnight 2 August 2018. Membership of the High Council and some other aspects of its procedures are set out in the Salvation Army Act 1980, enacted by the British Parliament.

At present 111 Salvation Army officers are eligible for membership of the 2018 High Council, subject to the issuance of a formal summons by the Chief of the Staff, Commissioner Brian Peddle, in due course. The Chief will preside over the opening of the High Council until such time as a President and Vice President have been elected from among its members. Any active Salvation Army officer is eligible to be elected as General, regardless of membership of the High Council.

In order to ensure that each High Council member can contribute fully in the holy tasks of prayer, worship, devotion and deliberation, it is anticipated that translation will be provided in French, Hindi, Korean and Spanish.

For the second time the High Council will meet at the Renaissance Hotel close to Heathrow Airport in West London. The Chief of the Staff comments: ‘It was a difficult decision not to return to Sunbury Court with its historical significance for many High Councils but the number attending and required infrastructure during an extended period necessitates the change.’

International News Releases will be issued periodically relating to the High Council, providing information about the process and constitution. Plans are also being formulated to provide updates throughout the High Council and for a live webcast to announce the identity of the 21st General of The Salvation Army at the conclusion of proceedings.

A special section of the International Headquarters website will carry all 2018 High Council news: check www.salvationarmy.org/highcouncil2018 for updates.