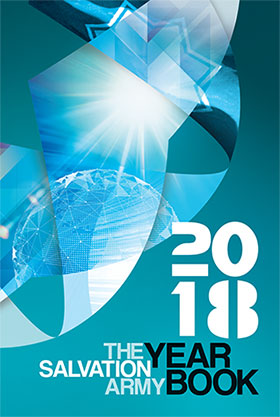 THE Salvation Army Year Book 2018 is now available to purchase in hard copy and – for the greatest convenience and portability – as an e-book which can be uploaded to mobile devices using the Kindle or Kobo apps. For the second time, the Year Book is published in full colour, making the most of some spectacular photos from the time under consideration. Useful maps, statistics and information provide an up-to-date snapshot of the church and charity's ministry in 128 countries, making the book a 'must-read' for anyone linked with The Salvation Army.

In his foreword, ‘The Salvation Army – A Force for Positive Transformation’, General André Cox reveals that he regularly meets people who have ‘no idea that The Salvation Army is involved in so many issues or programmes or that it has such a wide geographic spread’. The Year Book can quickly clear up any such problems!

Copies of the 2018 Year Book can be purchased from territorial trade and supplies departments or direct from International Headquarters, at the special price of £6 (plus postage – £3.12 in the UK/£4.90 in Europe/£7.75 for the rest of the world). Please send a cheque made payable to ‘The Salvation Army’ to Communications Section, The Salvation Army International Headquarters, 101 Queen Victoria Street, London EC4V 4EH, United Kingdom.

Alternatively, for the electronic version, search for ‘Salvation Army Year Book 2018’ on kobo.com or your local Amazon website.