YOUNG Salvationists from Brazil have brought a splash of South American colour and rhythm to International Headquarters (IHQ) in London. The 36 young people – members of the Brazil Territory's mission team to the London 2012 Olympic Games – were shown around IHQ and met General Linda Bond before presenting two dance routines in the public cafe.

The Brazil Territory is just one of a large number to have sent mission teams to take part in More than Gold activities, using events linked to the Olympics and Paralympics to spread the gospel message and raise awareness of issues such as human trafficking. Also in London for the first week of the Games were teams from the Australia Eastern, Australia Southern, Denmark, France and Belgium, Korea, India Northern and USA Western Territories as well as a group from Birmingham Citadel Corps (church) from the United Kingdom Territory with the Republic of Ireland. As the Games enters its second week, some of the teams have headed home but reinforcements are in place from the Canada and Bermuda, Germany and Lithuania, The Netherlands and Czech Republic, Norway, Iceland and The Færoes, Switzerland, Austria and Hungary and USA Southern Territories, along with a group from Tustin Ranch Corps in the USA Western Territory. Another team from Australia Eastern will arrive in time for the Paralympic Games. 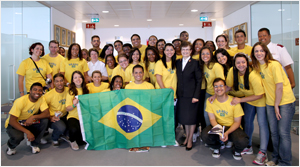 The mission teams are taking part in a variety of ways. Some are supporting programmes at Salvation Army corps (churches) and centres – particularly those which involve local young people in sport-based activities. Others are giving out water and distributing special editions of UK publications Kids Alive! and The War Cry or talking to people at a number of United Nations-supplied giant 'gift boxes' which draw people's attention to the ongoing issue of human trafficking. Two of the corps involved – Stepney and Stratford – are within a short walk of the Olympic park. Other locations are in various parts of London and the south-east of England.

For the Brazilian team members, the experience they gain during London 2012 will be particularly valuable in the coming years, as Brazil hosts the FIFA World Cup (football/soccer) in 2014 and then Rio de Janeiro hosts the Olympic and Paralympic Games in 2016.