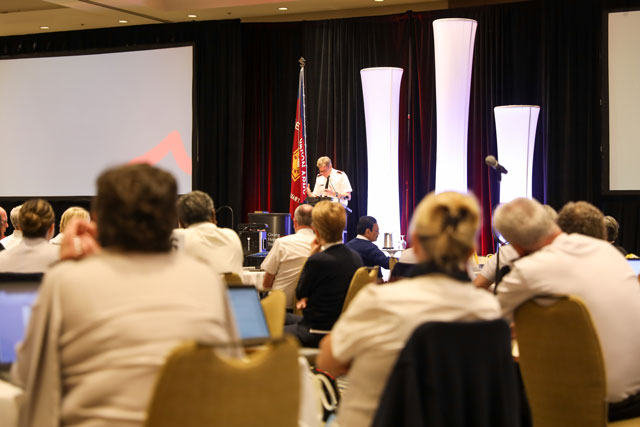 International leadership gathered on Monday 26 September 2022 to hear and reflect on an absorbing and challenging presentation on Identity given by Commissioner (Dr) Ted Horwood and Commissioner Debbie Horwood, IHQ International Secretaries for Programme Resources.

Officers worked together in contemplation around tables whilst others joined the conversation via live streaming, all accompanied by the efficient translators in the conference room. During a packed working day punctuated with breakout groups, Chief of the Staff Commissioner Lyndon Buckingham invited officers to participate fully in the guided conversations that followed the formal inputs. He said, ‘We are very keen to hear as many voices as possible.’

Commissioner Ted Horwood challenged delegates to consider what they consider to be the main things in our ministry and message. Stressing that the General is actively seeking the opinions of international leaders, he emphasised that the work of the day was not an academic exercise. He said, ‘Not only is the General seeking views on how best to shape The Salvation Army of the future, he also wants to know what his leadership is willing to intentionally implement. Leadership is about change. Change that will advance our ministry and mission and prepare us for the future.’ Speaking personally, he added, ‘I do not want my kids to experience the Army of my generation. I want them to see a renewed Army, relevant to their generation and led by people who understand that new wine must be kept in new wineskins.’

Plenary sessions commenced at specific junctures throughout the day, with leadership initially tasked with considering the aspects of Salvation Army identity which either advance the Salvation Army mission or to reflect on modifying those that do not.

Healthy organisations are recognised as those which are fit for purpose and that function properly. Leaders were invited to consider the functionality of a stool which balances perfectly on three legs of equal length. A phrase such as ‘Save souls, grow saints and serve suffering humanity’ structured properly could be a good representation of The Salvation Army. But, if one leg is shorter than the others, the stool will be unbalanced and unfit for purpose. Commissioner Debbie Horwood challenged leaders to discuss two questions: Where is there an imbalance in your area of responsibility and, can you identify where the Army may be weak or falling short?

Leaders listened attentively to a presentation which postulated the nine specific characteristics which Commissioner Ted Horwood suggests may constitute the bedrock of an organisation. These set the tone for the day’s discussion about the future of the movement and included: Polity (church government), that we are ‘salvation people’, the mission statement, the dual ministry of personal salvation and social action, women in ministry, military metaphor, sacramental position, our Wesleyan theology and that we are culturally assimilated (nationally relevant to the culture we are operating in). Delegates were also invited to consider and highlight any subject which they felt should be a significant global priority. Two searching yet fundamental questions were deliberated: What advances the mission of The Salvation Army today, and what constrains it?

Commissioner Ted Horwood emphasised that this was the beginning of a dialogue which needs to be continued. Concluding the session with an opportunity for sharing group feedback, comments included that: these questions were best addressed not by a global answer but a contextual zonal response; that the global deployment of officers required a willingness to adapt to the culture of the host territory and that the hindrance comes when officers export their own culture without a willingness to assimilate into their new culture; that The Salvation Army believes and affirms a sacramental life; that there is a need for courageous global discussion to determine The Salvation Army’s ‘non-negotiables’ within this 21st-century context; that God is with us; that we believe that we should be champions of who we are in Christ; that The Salvation Army as a movement needs to recognise the difference between our articulated identity (what we say we are) and our operant identity (what we actually do); that we must not crush the possibility of innovation; that we should focus on the development of youth and officers in the need for continuity; that the Army needs to strengthen its identity; that we recognise that the one Army is an Army of diversity; that we fully recognise that women have a fundamental right to preach and be appointed to roles which recognise their gifts; that we must emphasise salvation, holiness and integrated service; that the Army should recognise a diversity of cultures, different styles of uniform and a variety of musical expression, but must not compromise on theology; that looking to the future the Army must keep a sacrificial focus with unconditional love, and that people need to feel heard and understand the decisions that have been taken in order to comprehend and embrace the way forward.

The International Conference of Leaders will not be making recommendations as a result of this work, instead, views will be collated and reported back to the General for further consideration.

Commissioner Lyndon Buckingham closed the day by sharing that delegates from Russia, Africa, South Asia, the Americas, Europe and the South Pacific and East Asia Zone were able to participate in the day’s discussions thanks to the remote access provided by technology.