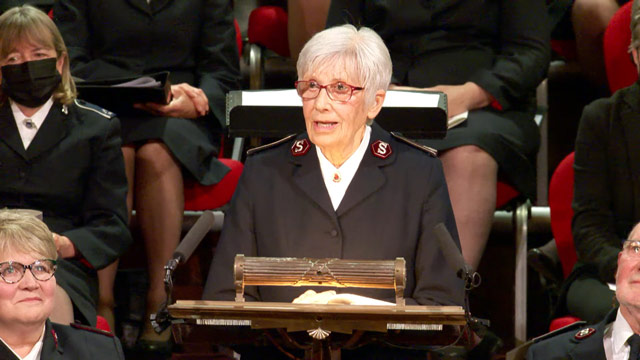 THE congregation in the Assembly Hall at William Booth College, as well as thousands watching online around the world, celebrated and gave thanks for the life and ministry of General John Larsson on Friday 8 April.

Commissioner Freda Larsson and her sons, Karl and Kevin, with other family members, friends and fellow Salvationists shared in a meeting that was a fitting tribute to the 17th General of The Salvation Army. Among those present were General Brian Peddle and World President of Women’s Ministries Commissioner Rosalie Peddle, General Shaw Clifton (Retired) and Commissioner Birgitte Brekke-Clifton, Commissioner Gisèle Gowans, territorial leaders Commissioners Anthony and Gillian Cotterill and officers from Territorial and International Headquarters.

Commissioner Keith Banks, who led the meeting with Divisional Commander Major Val Mylechreest (South London), revealed that General Larsson had left meticulous instructions about its content and had wanted this to be called a ‘thanksgiving service’. He had written that it was ‘to be joyous, a celebration of life, with emphasis on praise and thanksgiving to God for his goodness’.

After the opening song, ‘He Came to Give Us Life in all its Fullness’, General Larsson’s sister-in-law, Susan Turner, sang ‘The Lord Is Near, Have No Anxiety’ as the prelude to a prayer by Major Alison Hudson, the Larssons’ corps officer at Bromley Temple.

In welcoming everyone, Major Mylechreest spoke of General Larsson’s influence on many people and, referring to his four years as principal of the International Training College (now William Booth College), said she represented ‘a few hundred officers who are proud to say that they were Larsson trained’.

General Peddle brought words of tribute saying, ‘I am privileged to express my deep appreciation on behalf of a grateful international Salvation Army.’

He outlined General Larsson’s attributes: ‘I saw him as a humble servant of God, but who was aptly described as a spiritual giant. While many Salvationists around the world will instantly associate him with his partnership with General Gowans and their musicals, General Larsson was also a theologian and an author. He was a man of prayer, an encourager, a wise counsellor, trusted confidant, and friend.’

The General acknowledged ‘the logical, insightful, spiritual and studious mind of this man as an author’ and mentioned his books on Army history as well as works such as Spiritual Breakthrough and The Man Perfectly Filled with the Spirit, ‘which brought out the richness and the depth of the spirituality that poured out of the man through the pen’.

He continued, ‘General Larsson was sought out, looked up to, drew attention because he was anointed of God. The Holy Spirit filled him and flowed through him. To spend time with General John Larsson was to spend time with a gracious man of God, whose very nature brought calm and whose words were filled with considerable wisdom… General Larsson has heard “Well done, thou good and faithful servant.” And I want to say to God tonight, “Thank you for General John Larsson.”’

The order of service explained that ‘to celebrate the extraordinary gift that God gave to General John Larsson as a musician and composer’, all the music in the thanksgiving service was ‘from his pen’. The congregational songs included ‘God’s Love to Me is Wonderful’, to the tune written for a youth chorus in the 1970s, and ‘They Shall Come from the East’ from the musical The Blood of the Lamb.

Kevin Larsson conducted Bromley Temple Band as they played ‘Fill the World with Glory’, his arrangement of his father’s tune for the song ‘God’s Soldier Marches as to War’. The band later played the march ‘It’s New’, after which the congregation was invited to sing the chorus featured in the piece. Bromley Temple Songsters sang ‘The Living Waters’ and ‘There’s a Light in Heaven’s Window’, with lyrics by General Larsson’s mother, Commissioner Flora Larsson. 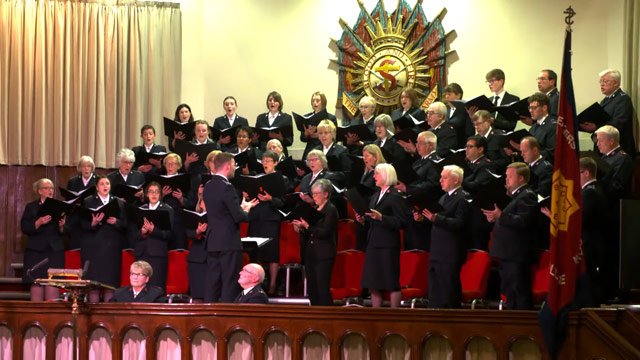 Commissioner Freda and her sons brought family tributes. She said, ‘So many personal stories have been shared with us as a family of the way that John has had an impact on people’s lives through his preaching, teaching, writing, music or personal contacts.’

She spoke of their meeting, marriage, family life and ministry, and quoted a favourite song that would be with her in the days ahead: ‘You’re not alone, you’re in the Father’s hands, He knows his own, your steps his heart has planned. You’re not alone, whate’er your lot may be, He’s watching tenderly over you and me’. She added, ‘I rest in that assurance today.’

Karl spoke warmly of his father, describing him as ‘gentle, graceful and encouraging’ and saying that, even with his father’s many Army responsibilities over the years, ‘our family life never suffered – it blossomed in fact’.

After sharing a few words Kevin sat at the piano and, as his tribute, played a medley of some of his father’s melodies, including ‘Someone Cares’, ‘How Much More’, ‘Hundreds and Thousands’ and ‘Love Cannot Fail’.

For the Larssons’ retirement meeting in 2006 Karl and Kevin had put together a video presentation, ‘A Retirement Salute’, and this was shown in the thanksgiving service. Accompanied by a selection of General Larsson’s music, it interspersed photos from the couple’s lives and ministry with images from the countries they visited during their years as international leaders.

Major Mylechreest read from John 10:1-10 and Philippians 1:19-21 before Commissioner Banks brought his message. Referring to a later verse in Philippians, where Paul writes, ‘Timothy’s the real thing’ (2:22 The Message), Commissioner Banks said, ‘All of us who knew General John Larsson … knew that there was nothing false or fake about him. To be in the presence of John Larsson was to know that he was the real thing, he was authentic.’

Commissioner Banks described him as ‘an authentic friend’ and gave examples of the personal support General Larsson had given him, as well as experiences shared during their almost 60 years of friendship.

‘What helped to make him such an authentic friend was the fact that he was an authentic Christian,’ Commissioner Banks continued. ‘When he heard the Lord say, “Follow me,” he said yes. When the call came to live out the radical life that Jesus came to bring, with its call to holy living, he said yes. When he heard the call to ministry as a Salvation Army officer, he said yes. His yes to the claims of Jesus … permeated his creativity, it influenced his relationships with people and it shaped his public proclamation of the gospel. He knew for himself what Jesus meant when he said I’m come that you might have life in all its fullness, because this was the life to which he had said yes. When John wrote his book about Jesus, The Man Perfectly Filled with the Spirit, he was writing about someone he knew personally, and to whom he had given his life.’

Commenting on Philippians 1:21, ‘For to me, to live is Christ and to die is gain’, Commissioner Banks said, ‘Death is not the end of the story for the authentic believer.’ In conclusion he referred to the song the congregation was about to sing, ‘They Shall Come from the East’, and said there is no ‘discrimination or distinction or exclusion’ in the Kingdom of God. ‘I urge you to be sure in your own heart that you will be included.’

After moments of prayerful commitment and the final song, the territorial commander closed the thanksgiving service with a prayer and benediction.

Earlier in the day a committal service took place at Beckenham Crematorium, led by Major Iain Hudson (Bromley Temple). Chief Secretary Colonel Paul Main prayed and Major Alison Hudson read John 14:1-6 and 27. Lieut-Colonel Miriam Frederiksen, the sister of General Larsson, read the poem ‘Death but a Door’ by Flora Larsson. The service included songs by Albert Orsborn, ‘I Know Thee Who Thou Art’, and Annie Johnson Flint, ‘He Giveth More Grace’, which assured those gathered that ‘His love has no limits, his grace has no measure, His power no boundary known unto men; For out of his infinite riches in Jesus, He giveth, and giveth, and giveth again’.