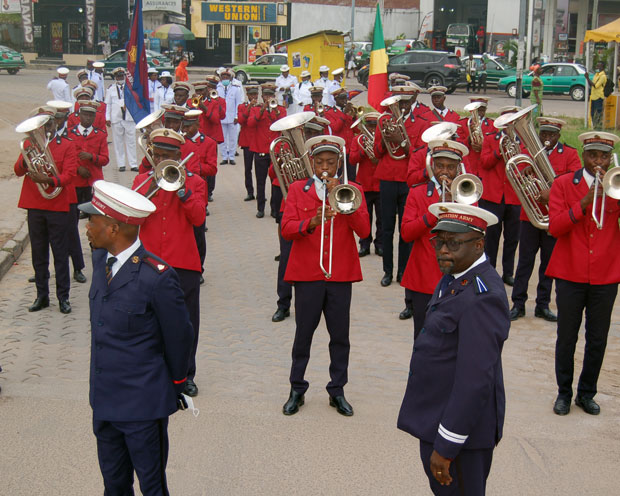 GENERAL Brian Peddle and Commissioner Rosalie Peddle (World President of Women’s Ministries) were overwhelmed by the enthusiastic demonstrations of faith they witnessed during their visit to The Salvation Army’s Congo (Brazzaville) Territory. As well as commissioning the cadets of the Messengers of Reconciliation Session they also had opportunities to meet Salvationists and friends from across the Republic of Congo and from Gabon, part of the territory.

The international leaders arrived at Maya-Maya International Airport in a rain shower, which in Congo is a sign of blessing. Having been welcomed by territorial leaders Colonels Brigitte Odile and Eugène Bamanabio, the General spoke to members of the national press, answering questions about The Salvation Army and situations around the world.

On Thursday 5 May the international leaders led a time of devotion at the territory’s training college, where the 24 cadets who were preparing to be commissioned as Salvation Army officers signed their covenants, pledging their lives in service to God through The Salvation Army.

The General told the cadets: ‘The Covenant you make with God must be in your hearts. God wants your hearts to be ready … [so] listen carefully to what he asks of you.’ In sacred moments, each cadet signed his or her covenant at the mercy seat before presenting it to the General and Territorial Commander Colonel Eugène Bamanabio for their signatures.

Later in the day, Nzoko Corps (church) hosted the Silver Star service, in which honour was given to 118 parents of cadets and lieutenants in recognition of the faithful influence they have had on their children. Forty-eight were parents of cadets from the Messengers of Reconciliation Session and 70 were parents of lieutenants from the Messengers of the Kingdom Session, who were commissioned in 2021.

The next morning the international leaders enjoyed a tour of territorial headquarters in Brazzaville, where they had opportunity to speak with officers and employees. They went from there back to Nzoko for two sessions of officers councils attended by active and retired officers from Congo and Gabon.

Returning to Brazzaville in the evening, the General and Commissioner Rosalie led a music festival at The Salvation Army’s Fiftieth Anniversary Congress Hall. The spirit of Salvationism was seen clearly in the 13 music brigades which sang to the glory of God.

Commissioner Rosalie offered a Bible thought based on Psalm 96 in which she reminded the congregation that people were created to give God glory.

The international leaders started the next day in separate locations. Commissioner Rosalie led the Women's Ministries rally at the Fiftieth Anniversary Congress Hall while the General led a men’s fellowship rally at Ngangouni Corps.

Basing her Bible message on John 9:1-11, Commissioner Rosalie reminded the women gathered that hope can be found in Jesus. In response to the commissioner’s message, hundreds of women moved to the mercy seat for prayer and rededication.

The General encouraged his listeners to be men of prayer. Preaching from Ephesians 1:15-23, the international leader reminded the congregation of more than 500 men of the hope that can only be found In God. Almost half of those present made public declarations of faith by moving forward to kneel at the mercy seat.

The highlight of the youth rally in the evening was the spectacular sight of the General enrolling 276 junior soldiers. He called on the new young Salvationists to remain faithful to God, challenging them to live with confidence, consecration, and courage.

On Sunday morning The Salvation Army took to the streets of Brazzaville, with brass instruments playing and flags flying in a joyful, eye-catching march of witness.

Returning to the Fiftieth Anniversary Congress Hall, the General had the sacred task of commissioning and ordaining 24 cadets in front of a congregation that included government officials and ecumenical representatives. After the General’s Bible message, in which he used the story of King David to show the importance of repentance, many people moved forward to kneel in acts of penitence.

The final meeting of the visit included the enrolment of 277 senior soldiers. The General expressed his amazement at the huge number of people dedicating their lives to God’s service. He was delighted to receive them as additions to the rolls in Congo and Gabon, welcomed the new soldiers ‘in the name of Jesus Christ whom we serve’.

Appointments were given to the 24 new lieutenants by the General before Commissioner Rosalie offered words of encouragement.

The ongoing legacy of a Spirit-filled time together was encapsulated when more than 100 young people responded to an appeal to become officers of The Salvation Army.

Report based on submissions by Hurfet Zoba