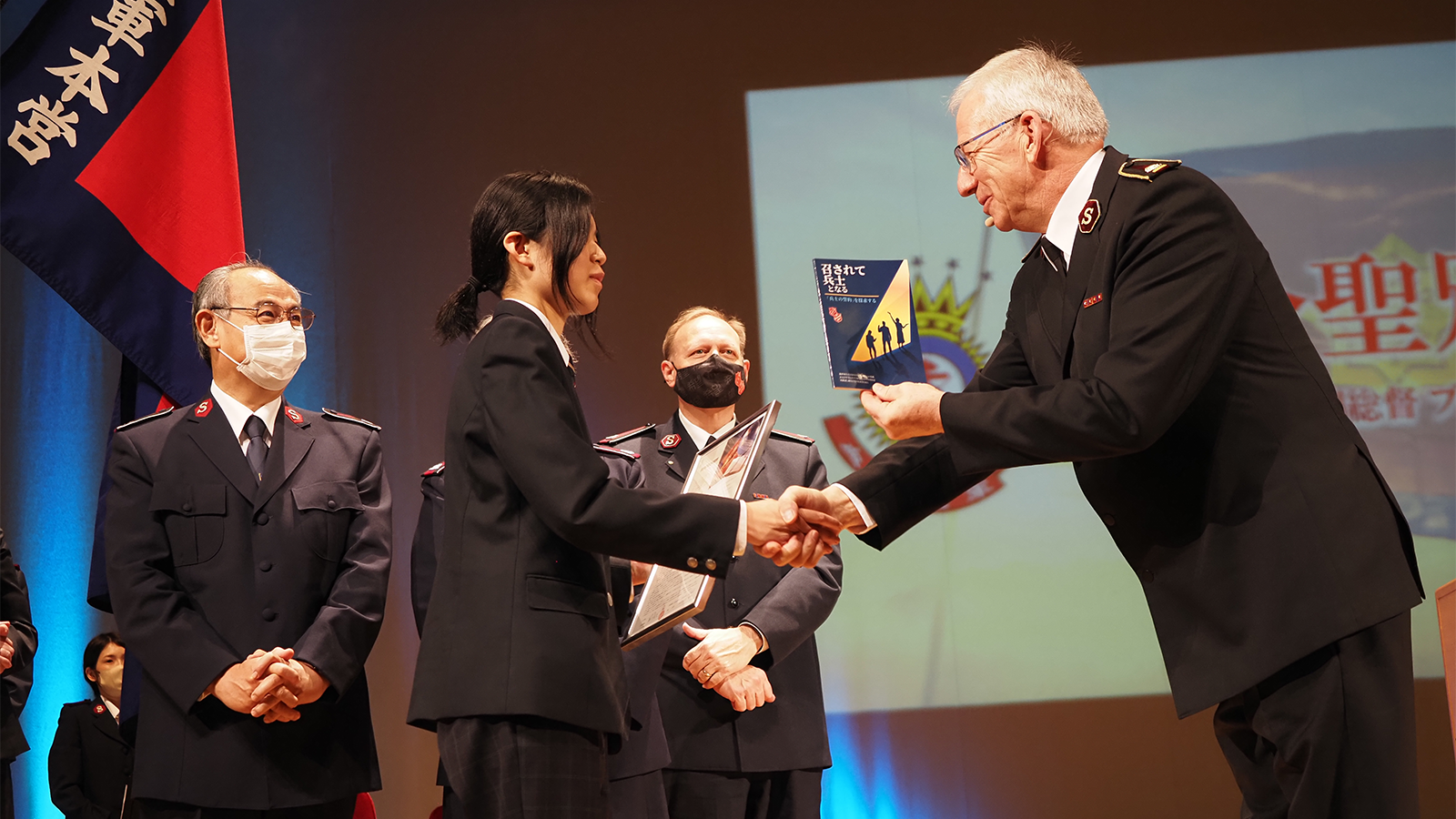 The longed-for visit of General Brian Peddle, spiritual leader of The Salvation Army, and Commissioner Rosalie Peddle (World President of Women’s Ministries) to Japan had been postponed since 2020 due to the global pandemic.

To the delight of the Japanese, the border was finally reopened and on Thursday 17 November 2022 the international leaders landed at Haneda Airport, Tokyo, following their previous visit to Brazil.

The General’s party initially travelled 500 kilometres by bullet train to encourage Salvationists at the West Division united meeting in Osaka, which began with a pre-worship session led by Ryoichi Nomoto and Wakana Tateishi.

The General and Commissioner Rosalie Peddle were welcomed by a vivid film presentation contributed by colleagues unable to attend in person due to the continuing caution around the COVID-19 virus.

Following warm words of welcome by Divisional Commander Captain Tomohiro Suzuki and Territorial Commander Colonel Stephen Morris, the General spoke about the unshakeable Christian hope in the resurrection of the Lord Jesus Christ. Salvationists were invited to respond to the Lord and make their way to the mercy seat.

Such a time as this

The global leaders then travelled back to the capital city to lead an executive officers’ lunch, where Commissioner Rosalie Peddle spoke with feeling and empathy about how to endure as a spiritual leader during this challenging time. Later, during Territorial Officers’ Councils, the General urged those present to renew their Officer’s Covenant by describing Esther and quoting the Scripture, ‘I am called for such a time as this’ (Esther 4:14).

Responding to the challenge, many knelt to recommit themselves to the service of the Lord. 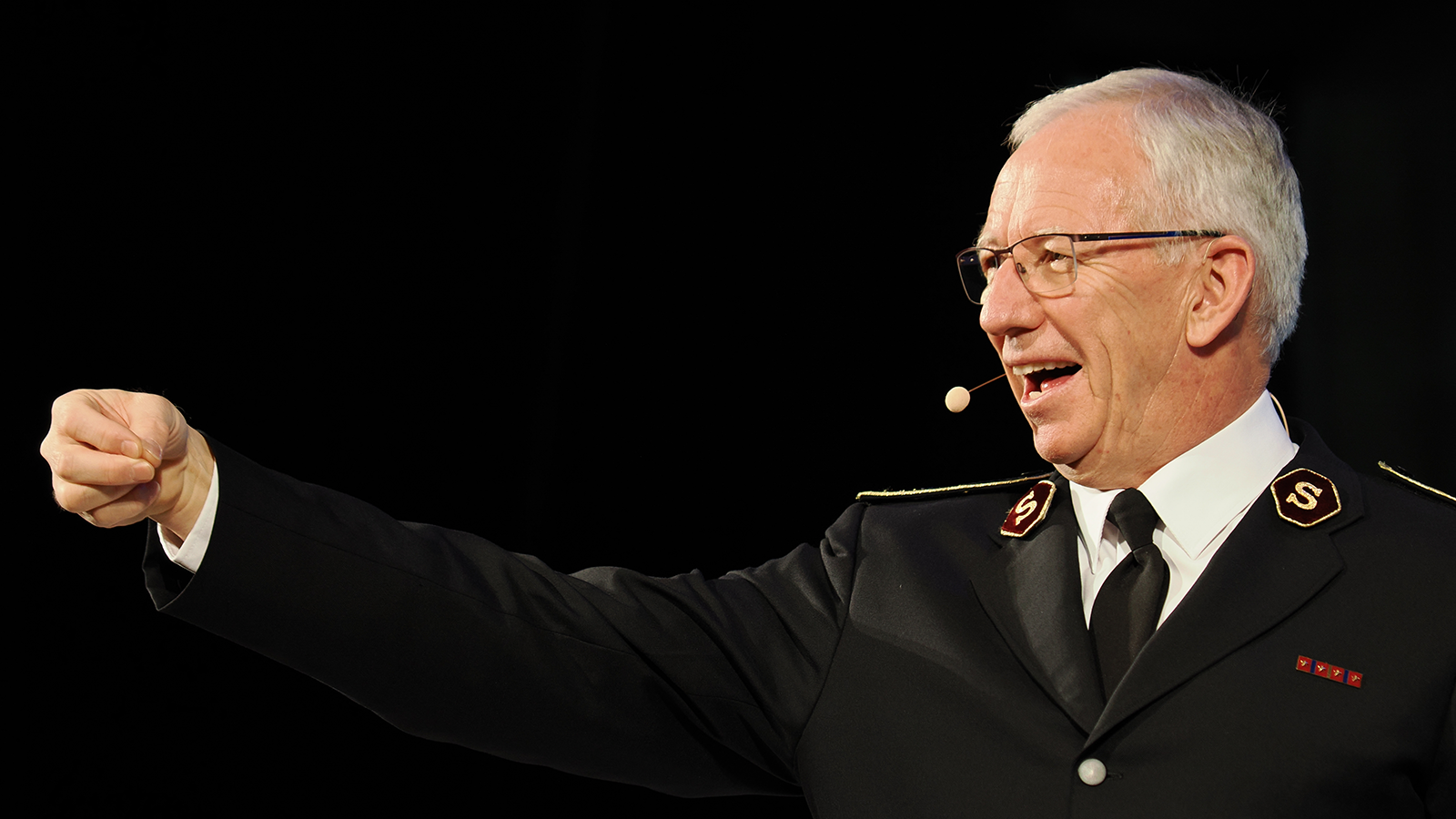 The General addresses the congregation at a Saturday evening gospel concert.

The subsequent evening gospel concert at the Japan Education Hall was filled with the powerful music of Christian artist Lauren Horii, who lifted up the mighty name of Jesus through her delightful vocal solo.

Cadet Shinya Yoshida boldly shared his testimony on the transformation of his life from drug addiction. Quoting Isaiah’s experience of seeing the holiness of God, the General challenged the congregation to seek God’s presence and to recognise their need for transformation in Christ.

Salvationists later gathered at Kyoritsu Auditorium near territorial headquarters for a united holiness meeting. The General’s party was received by a timbrel display with a combination of video recorded presentations and in-person drill.

The Japan Staff Band gave its first full performance after three years of pandemic restrictions to the delight of the congregation, who joined in the singing of ‘Draw me nearer to the Lord’. The General was visibly thrilled to enrol Chinatsu Kobayashi as the world’s newest Salvation Army soldier.

A mascot character of YouTube children’s programme Shimo Bear with his friend Mari-chan appeared on the stage to introduce Commissioner Rosalie Peddle’s testimony. Then the General called Salvationists to stand up as a holy people of God. He urged them to seek the holiness that is here for ‘such a time as this’. 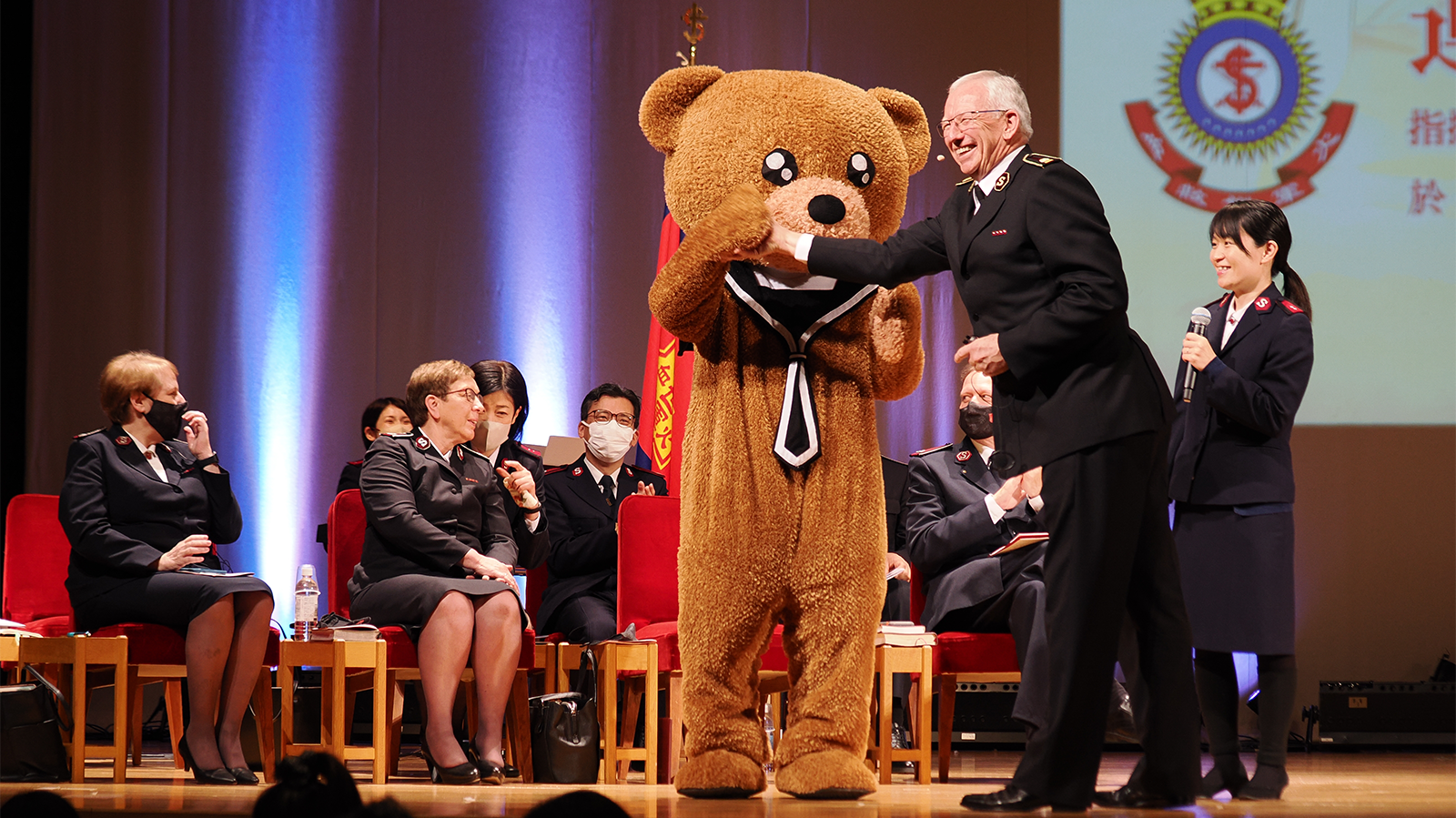 A character from Shimo Bear greets the General at the united holiness meeting.

In the evening, the international leaders met with members of the National Advisory Board to exchange views on the latest international situation and to consider how best The Salvation Army can serve the world.

On conclusion of a celebrated visit, the General and Commissioner Rosalie Peddle departed for London following a packed four days in the Japan Territory.