THE first-ever private meeting between a Salvation Army General and a Pope was an occasion where the grandeur of the surroundings of the Vatican was in contrast to the informal warmth of the interaction between the world leaders of The Salvation Army and the Roman Catholic Church. The meeting was the culmination of conversations held between Salvation Army and Vatican representatives from 2007 to 2012 – newly published in a book – but also the expression of the desire to continue these conversations. 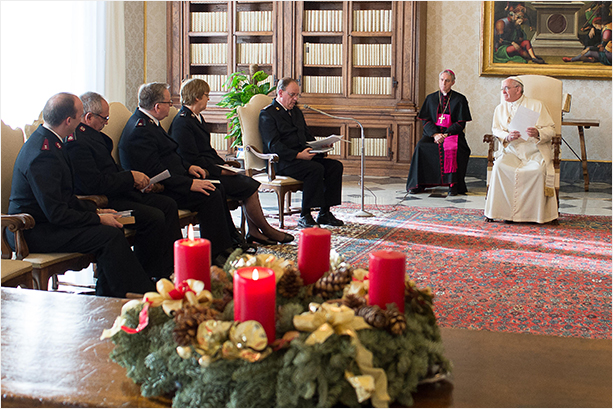 The day had not started in the best way, as a general strike had blocked roads and public transport in Rome, with huge groups of protesters occupying the main streets. Monsignor Gregory J. Fairbanks, from the Pontifical Council for Promoting Christian Unity, had to walk through the crowd in order to meet the Salvation Army party which consisted of General André Cox, Commissioner Silvia Cox (World President of Women's Ministries), Commissioner William Cochrane (International Secretary to the Chief of the Staff), Lieut-Colonel Massimo Tursi (Officer Commanding, Italy and Greece Command) and Captain Scott Linnett (Private Secretary to the General). The vehicle provided by the Vatican managed to make its way through the crowded streets to the private rooms of His Holiness Pope Francis.

The General and his party were shown great respect throughout their journey through the Vatican, with members of the Swiss Guard standing to attention as they passed. 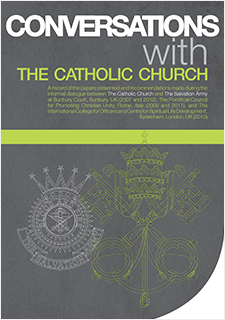 When the Salvation Army group entered the room for their meeting, the Pope moved quickly towards them, warmly greeting each of his visitors. He listened attentively to the greetings brought by the General, which underlined the many things uniting Catholics and Salvationists and spoke of the experiences of cooperation between priests and Salvation Army officers in many areas of the world. He took with him to present to the Pope specially bound copies of the new book Conversations with the Catholic Church, as well as a copy of The Salvation Army Year Book 2015.

In his greeting, the Pope underlined the fact that theological differences between The Salvation Army and the Roman Catholic Church had not impeded the witness of a united sharing of the love of God and neighbour. He described the two as often meeting 'in the same peripheries of society' and described the work of The Salvation Army enabling 'Christ’s light to shine in the darkest recesses of [people's] lives'.

He spontaneously interrupted the reading of his greeting to share an experience of his childhood in Argentina in a time when Protestants were seen as 'bad people who would go to Hell'. He recalled how a four-year-old Jorge Mario Bergoglio (as Pope Francis was then called) was walking with his grandmother when he saw two Salvation Army women dressed in uniform with 'those strange hats'. ('Do you still wear them?' enquired the Pope.) Jorge asked his grandmother if they were nuns or sisters and she replied: 'No, they are Protestants – but they are good.'

'This,' continued Pope Francis, 'was the first sermon ever I heard about ecumenism – and [it] has influenced me in my ecumenical walk.' 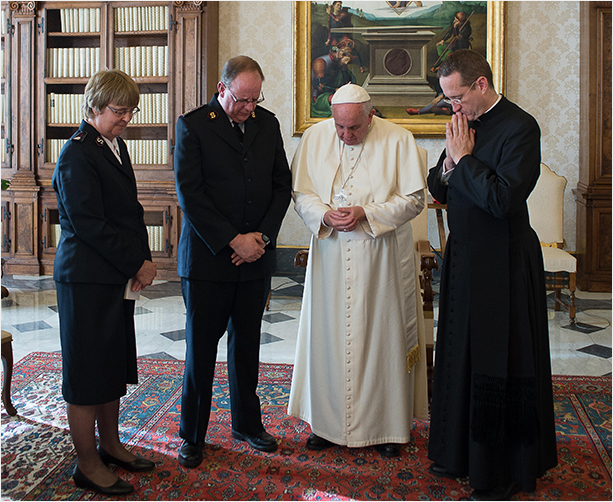 The Pope concluded his message with a request to be remembered in prayer, and it was a moving moment when – after exchanging presents – the Pope reminded the General of this request, to which General Cox offered to pray right there. The Pope gratefully accepted this kind offer before reciprocating, praying for the General in his leadership of The Salvation Army. The two leaders then spent a few moments in private conversation before concluding the meeting.

Copyright and privacy © 2022 The General of The Salvation Army