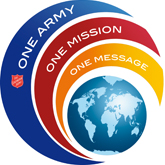 ONE ARMY: We see a God-raised, Spirit-filled Army for the 21st century - convinced of our calling, moving forward together

ONE MISSION: Into the world of the hurting, broken, lonely, dispossessed and lost, reaching them in love by all means

ONE MESSAGE: With the transforming message of Jesus, bringing freedom, hope and life

Download the One Army logo and Vision Plan in many languages

NEW: Bible studies for One Army, One Mission and One Message

Listen to 'As I Have Loved You', a song from Love - Right at the Heart, the first book to be published as part of the One Army, One Mission, One Message vision

Prayer pointers from ICO and CSLD

Watch General Bond at the launch of the Vision on 13 October 2011.


With thanks to the Video Production Unit, United Kingdom Territory with the Republic of Ireland