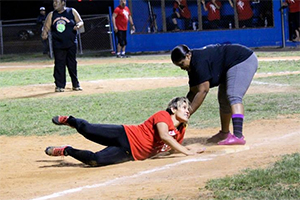 A few years ago three of the women from the Corpus Christi corps joined a local women's kickball league. Kickball is one of the largest past times for women here in south Texas. After playing one season they were frustrated at the lack of sportsmanship and the family-unfriendly environment of the league.  Someone suggested that they begin their own league. The corps has two fields, so that is exactly what they did. They formed a church league for women's kickball.

The two teams made up of Salvation Army employees, volunteers and soldiers are still going strong. The Salvation Angels have had the same coach from the beginning, Jesse Elizondo - social service director. The Shields have had a few different coaches but many of the same players keep returning. This past season they were under then leadership of Corina Puente, our thrift store manager and Club 316 leader. In our spring season the Salvation Angels came in first place and the Shields took third. 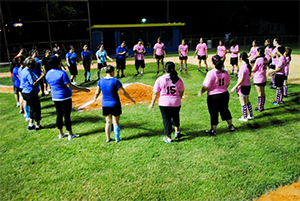 Each season begans with a group meeting in the corps fellowship hall that introduces the players and coaches to The Salvation Army and explains what we are all about. The women and their families are invited to participate in all the activities we offer. Each game ends in prayer on the field. There is a final banquet each season where the trophies are handed out and this gives us another opportunity to invite the families to our other programmes that we offer. To tie it all together and to get our other women's ministries program participants to meet and encourage these women we invite the kickball players to the women's annual meeting. We are looking for more opportunities to reach out to the women of our kickball league as our programmes expand.