THE last Sunday in September is set aside every year as The Salvation Army's Annual Day of Prayer for Victims of Human Trafficking, providing an important focal point for prayer to support people caught up in trafficking and those working among the victims. Every Salvation Army corps (church) and centre around the world is asked to make time on Sunday 27 September 2015 to offer focused prayer for The Salvation Army's ministry to trafficked people and to call on God to uplift the victims and change the hearts of those who gain financially from this modern-day slavery. 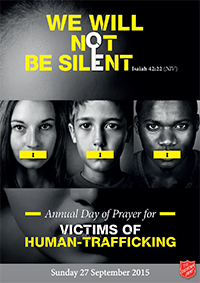 To support this day of prayer, materials are available at www.salvationarmy.org/ihq/antitrafficking. Posters, sermons, and prayers and other helpful educational information – brought together in conjunction with the International Social Justice Commission and Women's Ministries – can be found on the site to help with preparation and publicity.

Striking posters, designed by Berni Georges from IHQ Communications, feature the key verse that is being used for this year's day of prayer: 'We will not be silent' (Isaiah 42:22). Some viewers see the people in the posters as representing the victims of trafficking, to others the images are a challenge to 'unlock' their own mouths to speak out on behalf of those who have no voice.

All four posters are available in French, Spanish and Portuguese, or without text to allow for adaptation into other languages. As many copies as are needed can be downloaded from the website.