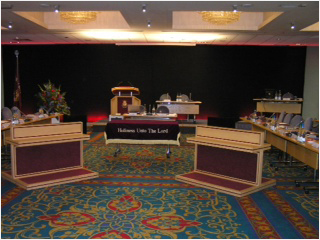 THE first High Council not to be held at a Salvation Army location commenced on Monday 29 July at the Renaissance London Heathrow Hotel. In moving moments of pre-High Council worship members had used the story of Jacob at Bethel to claim that ‘God is in this place’. The mercy seat had been brought from Sunbury Court and – with proceedings taking place in a slightly larger room than normal – it was able to be positioned prominently in the centre of the horseshoe arrangement of desks, to remind the 117 members present that they are engaged in a spiritual exercise. Only one member was unable to attend.

The Chief of the Staff (Commissioner André Cox) commenced the 2013 High Council and reinforced that members were embarking on a spiritual exercise to elect the 20th General of The Salvation Army – a task that called for spiritual wisdom and discernment of heart. Members shared together in small prayer groups before the Chief of the Staff read from the Scriptures and reminded them of Solomon’s request to God for a discerning heart to govern the people.

After establishing that the High Council had been convened in accordance with the Salvation Army Act 1980 the council began the task of electing the officers who will serve while the 2013 High Council is in session.

Commissioner William Roberts, National Commander, USA, was elected to serve as the president of the 18th High Council. Commissioner Roberts immediately took control of business, adding that it was a privilege to be elected by his fellow council members and he would do his best to keep the proceedings flowing smoothly. This he did by moving straight to the election of the other officials. Commissioner Birgitte Brekke (International Secretary for Europe) was elected as vice-president and Commissioner James Condon (Territorial Commander, Australia Eastern) as chaplain.

For the remainder of the day the President guided members through the review and, where necessary, amendment of the orders of procedure that will guide the High Council through its day-to-day business.

The Chaplain concluded the day by reading from Psalm 139 before the singing of ‘The Day Thou Gavest, Lord, is Ended’.