THREE experienced emergency workers have arrived in Nepal to support and direct The Salvation Army's response to the earthquake that killed at least 5,000 people. Damaris Frick, from International Emergency Services (based at International Headquarters), Colonel Carol Telfer and Major MacDonald Chandi (both based in Pakistan) are now in Kathmandu, where they will work alongside the Salvation Army officers in charge of the ministry in Nepal, Majors Lalsangliana Vuite and Lalnunsangi Ralte. They will be joined at the end of the week by Captain Kathy Crombie, a Nepali-speaker on the staff of The Salvation Army's International Social Justice Commission.

The team is staying in the majors' home until the end of the week, after which it plans to move into the building that usually houses a Salvation Army café – part of the skills and business training programme being run by The Salvation Army in Kathmandu. Initial reports that the house had been destroyed in the earthquake have turned out to be untrue, although it has sustained some damage. 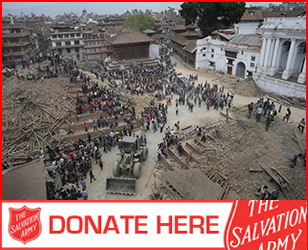 As often happens in major disaster responses, the United Nations has set up a programme. This becomes the hub for all relief agencies and non-governmental organisations, ensuring that the various groups work together as part of a relevant 'cluster' to cover as much ground as possible and avoid repetition. Damaris Frick has already attended several cluster meetings, which will help in the decision of where The Salvation Army will focus its efforts. An initial sum of US$20,000 has already been released by International Headquarters to provide 40 tents and a large supply of essentials such as food, water and blankets.

The India Eastern Territory, which oversees Salvation Army work in Nepal, is sourcing food, water and other essentials, which it hopes to transport by road – although the damage caused by the earthquake to major routes is making this very difficult. Captain Vanlaltluanga (Social Services Secretary, India Eastern) will join the team in Nepal on Saturday 2 May.

Offers of financial help are coming in from around the world, with major fundraising efforts put in place by a number of Salvation Army territories.

Team members in Nepal are grateful for all promises of assistance and they also value the prayers being offered by people across The Salvation Army and beyond. With this in mind, the disaster and response in Nepal will be the focus of this week's Worldwide Prayer Meeting. Go to http://sar.my/wwpm for more details, then follow @TSA_WWPM on Twitter and tweet using the #WWPM hashtag.

Please visit www.salvationarmy.org/nepalearthquake to make a donation in support of The Salvation Army’s #NepalEarthquake appeal.