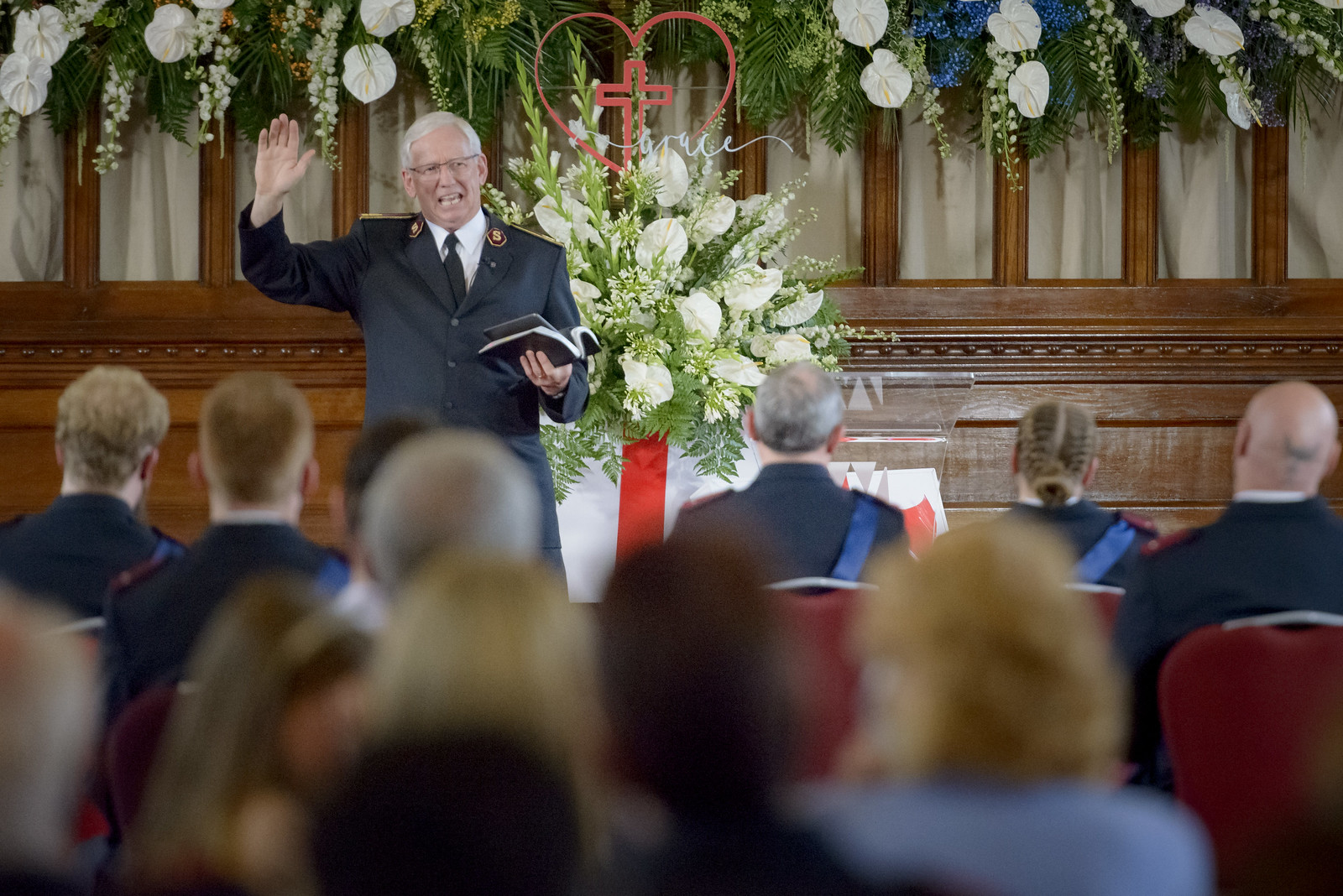 COMMISSIONING and ordination meetings for the United Kingdom Territory with the Republic of Ireland – led by General Brian Peddle and Commissioner Rosalie Peddle (World President of Women’s Ministries), supported by territorial leaders Commissioners Anthony and Gillian Cotterill – took place in front of a relatively small in-person congregation with a restricted number of musicians because of COVID-19 regulations. However, innovative use of video and streaming ensured that the meetings, held at London’s William Booth College, achieved the mix of celebration and solemnity that the occasion deserved. A version of the live streams was made available with the inclusion of British Sign Language interpretation, ensuring that the day’s events were available to an even-wider range of viewers.

The 19 cadets of the Messengers of Grace Session entered the assembly hall for the afternoon meeting as an International Staff Band ensemble played​, interspersed with contributions from a contemporary worship band. Prayer was offered by Territorial Leader for Leader Development Commissioner Gill Cotterill.

The college principal, Lieut-Colonel Judith Payne, formally presented the cadets to Territorial Commander Commissioner Anthony Cotterill. ‘The Messengers of Grace are ready to go!’ she declared. The commissioner thanked the staff and everyone else who had supported and prepared the cadets during their training. 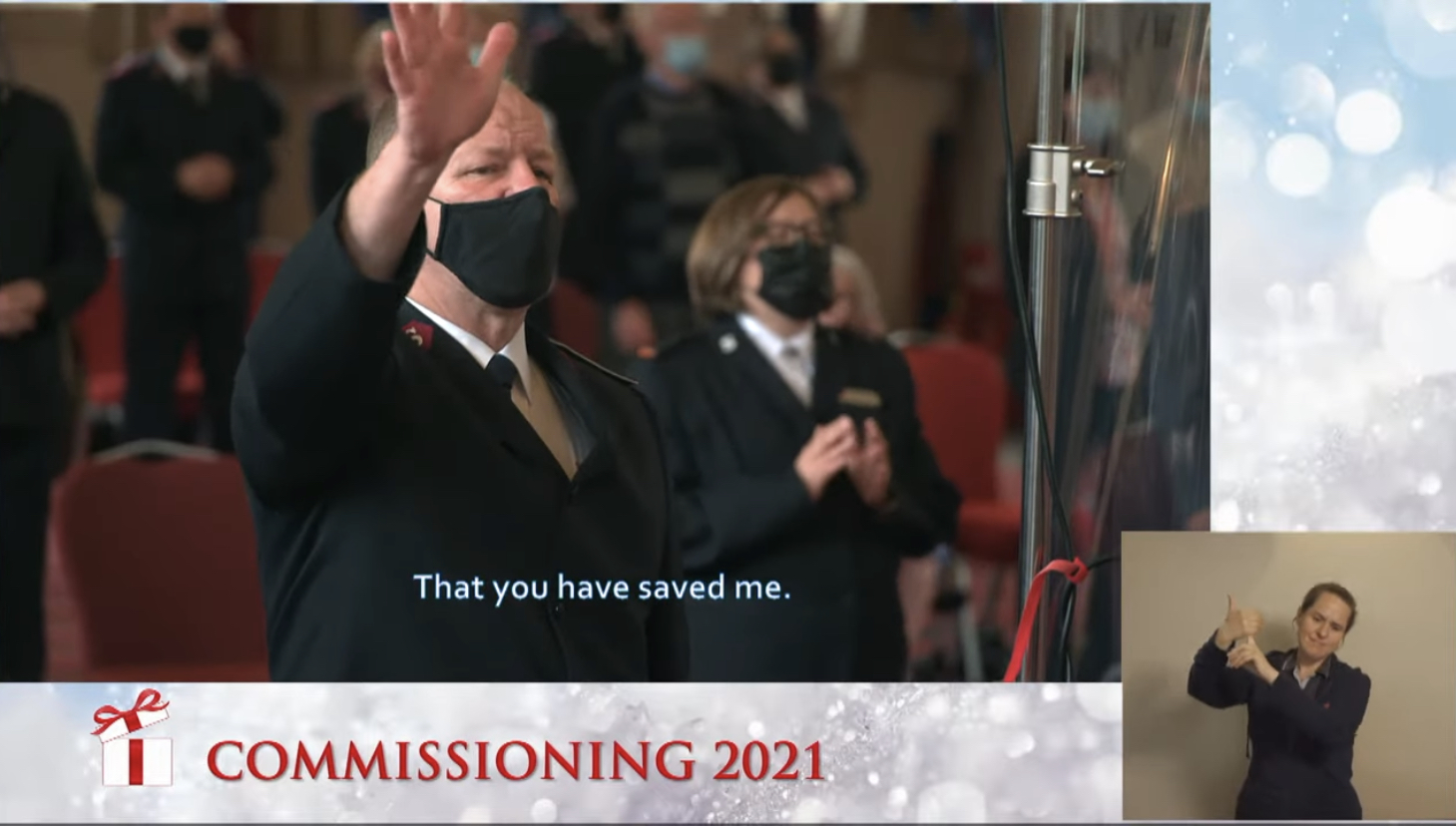 In her Bible message, Commissioner Peddle said: ‘In spite of this pandemic and other significant challenges that continue to paralyse our world, there is a beautiful, fresh wave of God’s Holy Spirit moving – refreshing and renewing desert places in people’s lives.’ She posed the question, ‘What is the Lord requiring of us today?’ and answered by saying that people need to ‘stand firm’ in their faith and in God’s grace, ‘lean in’ to Jesus for truth, comfort and strength, and ‘fight fiercely’ the good fight of faith.

The cadets’ dedication song, ‘Covenant of Grace’, was presented on video before the session recited the Army’s 11 doctrines, promising to live by them, serve others and be faithful officers. In the moving moments that followed, the cadets stepped forward individually to be commissioned by the General and Commissioner Peddle, who also read Bible verses specially chosen for each one.

At the start of the evening celebration, the newly commissioned officers marched into the hall behind their sessional flag and saluted the international and territorial leaders. Two second-year cadets prayed for the new lieutenants, their work and the communities to which they would be going, before a video of the sessional song, ‘Messengers of Grace’, was shown.

Lieutenant Nazia Yousaf entered college from Pakistan Territory, and the meeting included video greetings from her territorial leaders, as well as her parents and other family members.

Referring to Isaiah’s calling in Isaiah 6, the General spoke about how each person can live out his or her calling. People need to say: ‘Here am I, send me,’ he said. ‘Send me to my place of work, send me to my neighbour’s fence ... Let me be the witness of God’s grace.’

Speaking of the world’s need, he said, ‘Take a look around – you will see brokenness, you will see countless lives that are ravaged by sin, you will see those who are excluded.’ But, he said, God’s people are not to be spectators, they need to be involved in the world. He challenged his listeners – including thousands watching the live stream – to ‘give unconditional, unreserved love’.

Both meetings included worship and testimony emphasising God’s amazing grace. The day concluded with a call to action in the song, ‘O Church, Arise, and Put Your Armour On’.

The meetings can be watched at youtube.com/salvationarmyvideo