A SEAMLESS production combining inspirational video clips, vibrant music and passionate live speakers was an appropriately modern way to launch the ‘Reimagining’ of Salvation Army International Women’s Ministries. The live-streamed event at International Headquarters (IHQ) in London reached out to the world with a clear message that – in the words of Commissioner Rosalie Peddle (World President of Women’s Ministries) – ‘the breadth and reach of Women’s Ministries is limited only by our vision and our willingness to step out in faith to make a difference in the lives of women and girls today’.

The gathering began with a welcome and prayer from Commissioner Bronwyn Buckingham (World Secretary of Women’s Ministries), who acknowledged that God is ‘the reason for our celebrations’. She prayed: ‘May we see more clearly the opportunities in front of us, and may we be bolder yet for your Kingdom’s cause.’

She recognised the presence of special guests, including former World President of Women’s Ministries Commissioner Freda Larsson and a community partner from the Church of England, Bev Julien (Chief Executive of the Mother’s Union).

The events in the room were punctuated by five videos, each showing a different example of Salvation Army ministry for and by women. Footage from Kenya celebrated the impact of the Worth micro-credit programme; the women of the India Central Territory were shown to be engaged in care for the environment; in Brazil, an IT training programme for immigrants was highlighted; an Australian Salvationist shared how she has taken on the responsibility of ‘being’ The Salvation Army where she is through a fitness group; and, in the UK, women who have escaped violent relationships shared how vital it has been to receive support from the TLC drop-in cafe at their local Salvation Army.

The launch of ‘Time to be Holy’, the first of five new Bible study series, was explained by Commissioner Eva Kleman (Zonal Secretary for Women’s Ministries, Europe Zone). ‘It is our hope,’ she said, ‘that these Bible study series will be resources for spiritual development and growth designed to be revisited and shared throughout the years to come.’ 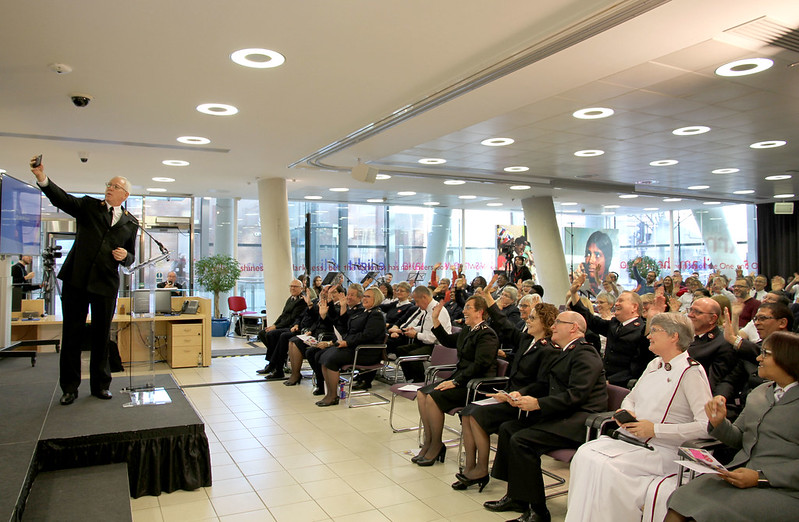 Social media launch by the General

General Brian Peddle’s role was to launch new Women’s Ministries Facebook, Twitter and Instagram channels, which he did in his own special style, taking a selfie with the congregation and posting it straight to his Twitter feed!

‘While I Tweet this photo,’ he said, ‘I invite you and those watching via live-stream to take a selfie or group photo and share it on one of the Women’s Ministries social media platforms. Let us know what you are doing to reach out to women and girls in your communities. Use the hashtag #WMReimagining.’

Today at International Headquarters, the team and invited guest have met to celebrate the launch of the International Women’s Ministries REIMAGINING. May God bless this ministry around the world. Greetings from all of us. @SalvArmyIHQ pic.twitter.com/BhyQdlIyhA

‘We know from God’s Word,’ said the General, ‘the familiar call of Christ to go into all the world and preach the good news … Times have changed and, thanks to technology, so have the methods by which we can connect and accomplish this great commission.’

A significant moment in the meeting was the launching of a new International Women’s Ministries Vision Statement. Commissioner Rosalie explained: ‘The Salvation Army’s International Mission Statement remains the foundation for all ministry undertaken, but this new vision statement gives direction and purpose to how this will be accomplished through the vehicle of Women’s Ministries.

Recognising that ‘this has not been the work of the women of IHQ alone, but has included women from around the world’, she shared the new vision statement, with each sentence expanded upon by a member of the IHQ Women’s Forum.

We envision women who are:
Transformed and empowered by the gospel to lead a Christlike life;
Enriched mutually through local and global connections and support;
Equipped to fulfil their potential through lifelong learning and development;
Engaged in social justice and action to positively impact the world.

The Chief of the Staff (Commissioner Lyndon Buckingham) offered a prayer, thanking God for inspiring and guiding this visioning process.

‘A strong force to be reckoned with’

Returning to the platform, Commissioner Rosalie explained the importance of reimagining The Salvation Army’s Women’s Ministries, opening up the potential to reach many more women and girls in Christ’s name.

‘Women’s Ministries is a strong force to be reckoned with and we have an incredible history of connecting with and raising up faithful women, who in turn have connected their own families and friends to the Lord. But as I prayed about next steps and the future generations of women, God kept speaking the words of Isaiah 43:19 into my heart: “See, I am doing a new thing! Now it springs up; do you not perceive it? I am making a way in the wilderness and streams in the wasteland.” It is out of this calling to see new things that the word “reimagining” became the defining point for Women’s Ministries. 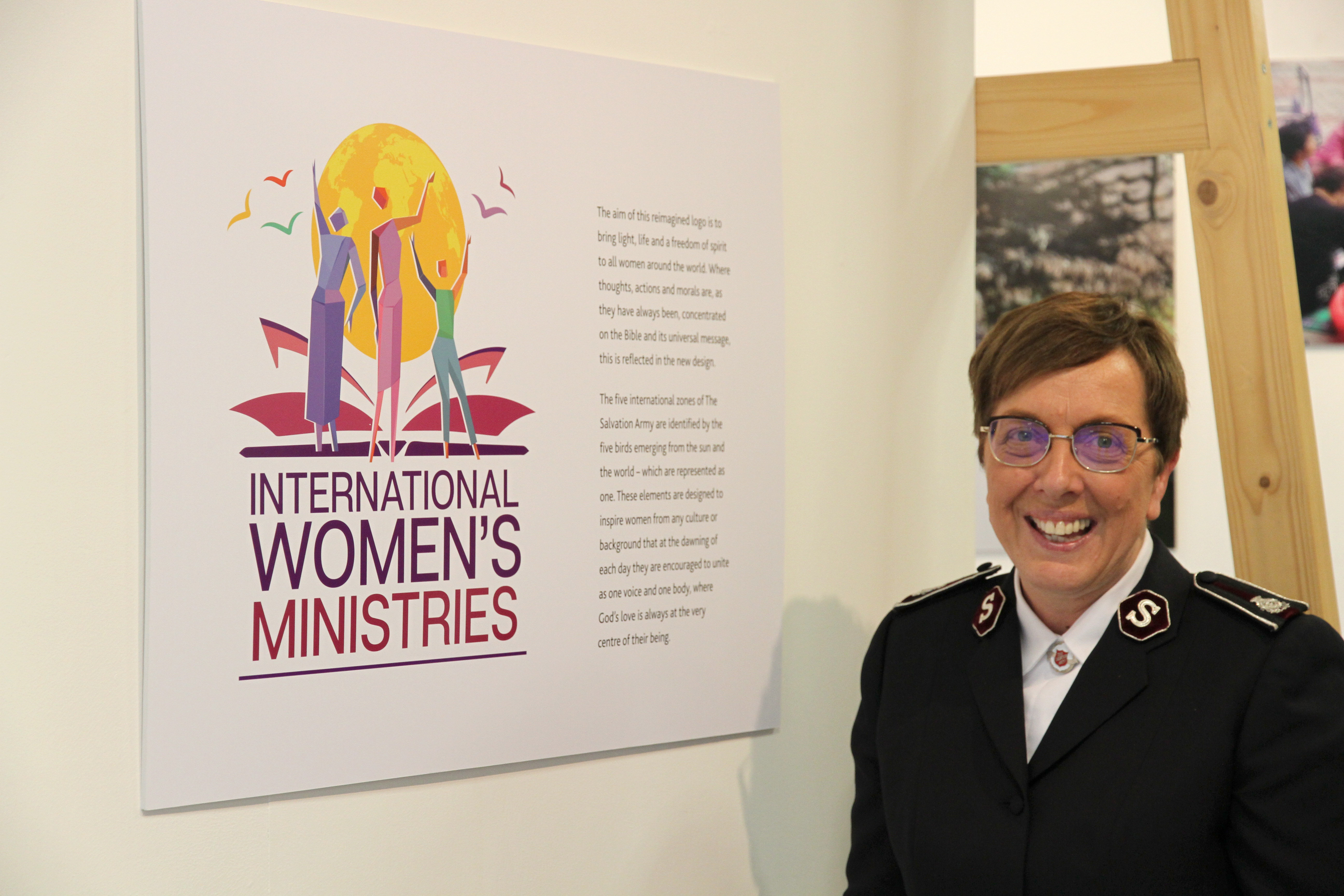 ‘I want to challenge all women leaders around the Salvation Army world – and this includes officers, soldiers and friends – to reimagine Women’s Ministries in their own contexts, to discover what new things we can be doing to speak into and overcome the challenges that women and girls face in our world today. I don’t want us to be confined by our celebrated history or traditions or any beliefs that Women’s Ministries must fit a specific format or look a certain way.’

This led on to the next ‘new thing’ – a logo for International Women’s Ministries, created by IHQ designer Jooles Tostevin-Hobbs.

‘The aim of this reimagined logo,’ explained the commissioner, ‘is to bring light, life and a freedom of spirit to all women around the world. Where thoughts, actions, and morals are, as they have always been, concentrated on the Bible and its universal message. The five zones in which The Salvation Army ministers are identified by five birds emerging from the sun and the world, which are represented as one.

‘These elements are designed to inspire women from any culture or background that at the dawning of each day, they are encouraged to unite as one voice and one body, where God’s love is always at the very centre of their being and lived out in their communities and relationships.’

She concluded: ‘God is calling us to be men and women of courage as we engage in his mission today! May we see the needs of women and girls around our communities through his eyes, and may we be moved with his love and compassion that we have no other choice but to “Do something!” and “Do it now!” 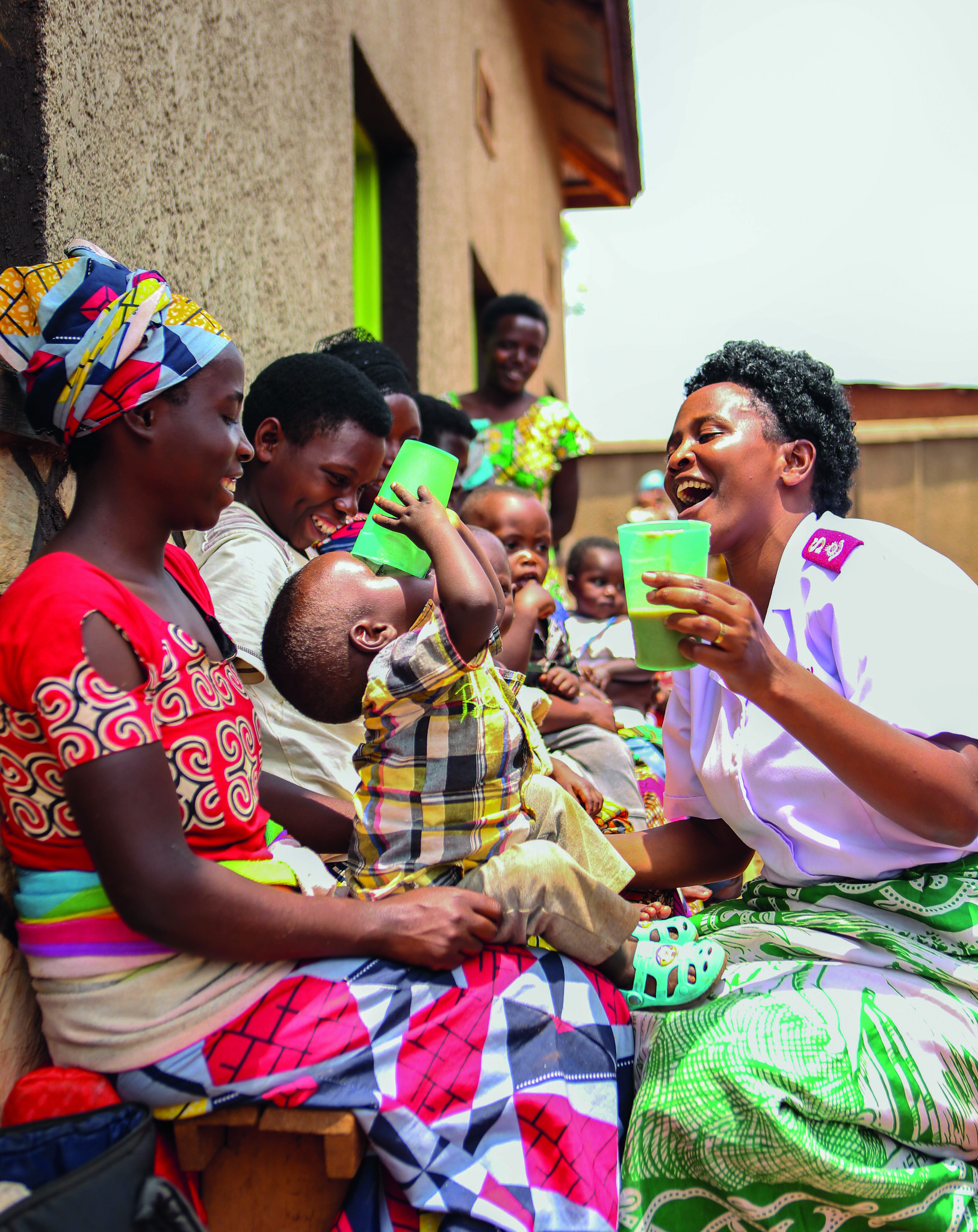 The event concluded with the congregational singing of an old Salvation Army song, ‘Greater Things’, appropriately set to a modern arrangement.

After the meeting, the congregation had opportunity to look round a new photographic exhibition in Gallery 101, adjacent to IHQ’s public cafe, which features examples of Women’s Ministries from around the world.

Most of the content is the result of a ‘Reimagining’ photographic competition launched at the end of 2019. Out of almost 130 photos, the final exhibition features 41 entries – plus a handful of images previously featured in IHQ publications and as part of The Whole World Mobilising exhibition – that demonstrate the breadth of Salvation Army ministry to women. The exhibition includes examples of Salvation Army ministry in 23 countries, including Poland, Kuwait, Bolivia, Papua New Guinea and India’s Andaman Islands.

The joy-filled winning photo, by Jean Baptiste Nkuruziza, shows Major Marie Grace Nsengiyaremyegiving porridge to a young child in a village in Rwanda as part of a Women’s Ministries nutrition awareness programme.

Online viewers saw Lauren Westwood (IHQ Literary and Editorial) interviewing Commissioners Rosalie and Bronwyn as well as a variety of IHQ officers and staff, finding out their thoughts on what they had witnessed and also learning which photos were their favourites.

The stream was watched in real time in around 1,200 locations, with some Salvation Army headquarters and centres – including in Bangladesh, Pakistan and Sri Lanka – showing the event on large screens. Responses came in quickly, with comments such as: ‘This Reimagining is timely. God bless our World President of Women’s Ministries for yielding to God’s heartbeat and empowering us’ (Precious); ‘Thanking God for Women’s Ministries around the world. God give us “greater things because of greater faith”’(60majormom); ‘Our vision and our willingness … absolutely crucial and key to what the future looks like.’ (Heather); ‘Praise Jesus … honoured to listen to stories from brave women at TLC. Thank you for sharing.’ (Margareta); and ‘I believe that through empowering women we can break the cycle of poverty and transform our communities #WMReimagining #women #empowerment #girls’ (Brenda).