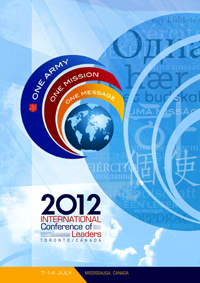 THE third day of The Salvation Army's 2012 International Conference of Leaders (ICL) commenced the 'getting down to business' sessions. It began with group Bible studies centred on 'Being in Christ, the basis for our unity as One Army'. Delegates explored the passages that teach how, in Christ, believers have a new identity and see things in a new perspective. The study reconfirmed that when people become Christians they commence a new relationship with God and with each other so that, though many, they are all part of one body.

The outcomes from the Bible study were helpful to bear in mind as the first paper was discussed – 'Women, Ministry and Leadership', presented by Commissioner Sue Swanson (World President of Women's Ministries). The commissioner challenged the leaders regarding theology and practice, not only concerning women in ministry, but also regarding marriage and leadership within The Salvation Army's organisational structures. Commissioner Swanson explained that in our systems and structures there are barriers to married women officers being considered for certain leadership positions. The legacy of Catherine Booth, she added, is a gift from God that the Army should cherish and continue to develop. Many suggestions of how to do that were shared in the plenary session.

In the afternoon Commissioner William Roberts (USA National Commander) presented the second paper, entitled 'Self-denial and Self-support'. The paper not only covered the issue of giving to God as a spiritual discipline, but also touched on accountability, ownership and the danger that 'dependency syndrome' poses to growth and development.