AS floodwaters rise in eastern Germany, The Salvation Army is actively assisting victims and volunteer workers. Around 30 volunteers – equipped with four vehicles – are providing help across the region. This area was also heavily damaged by extensive flooding in 2002, so many of the people who have lost personal goods and are presently without an income were also affected 11 years ago. 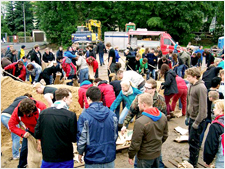 Until the water recedes, The Salvation Army is serving warm meals and coffee, packing sandbags, listening to heartbroken people and giving practical assistance where needed.

In the city of Meissen, which is home to a corps (church) and a mobile ministry, 600 cups of coffee and 300 servings of soup were distributed and sandbags were packed. In Leipzig and Dresden, hot drinks and warm meals were delivered into the early morning hours and again at midday for volunteers who are helping to keep the waters at bay by filling and deploying sandbags along the edge of the river. Meals and clothes are being distributed to people who have been personally affected by the floods. 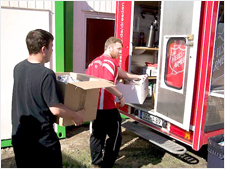 Salvation Army relief activities are being carried out in coordination with the local government and the fire service.

At present, the water is still rising and moving north, affecting a broader populace in Germany. When the waters recede, the heavy clean-up begins – shovelling mud out of homes, salvaging what can be saved and renovating. The Salvation Army will be present, helping where it can in this substantial work of rebuilding lives.

For the latest photos and information (in German) go to the Germany and Lithuania Territory website:
www.heilsarmee.de