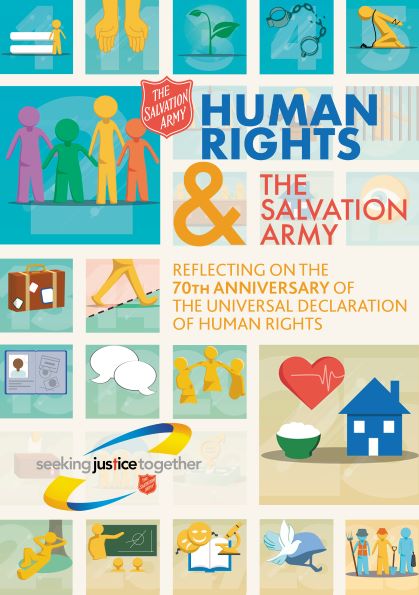 ON 10 December 1948, in Paris, France, the Universal Declaration of Human Rights was agreed by the member countries of the United Nations (UN). To mark the 70th anniversary, The Salvation Army has published a booklet, Human Rights and The Salvation Army, that reflects on the past and suggests ways to secure the future of human rights.

Summarising the Declaration, the UN states: ‘Human rights are rights inherent to all human beings, whatever our nationality, place of residence, sex, national or ethnic origin, colour, religion, language, or any other status. We are all equally entitled to our human rights without discrimination.’ In the past 70 years, the Universal Declaration of Human Rights has proved to be very popular around the world. It has been widely used and endorsed by many governments, organisations and people. As the preamble to the Declaration proclaims, it has become ‘a common standard of achievement for all people and all nations’.

Many Christians have seen the complementarity of the Declaration with the gospel of Jesus Christ. The Salvation Army marked the 20th anniversary by publishing a booklet called Human Rights and The Salvation Army. The then-international leader, General Frederick Coutts, wrote: ‘In Human Rights Year, Salvationists are identified with the high ideals of social justice and acceptance as the unchallenged right of every man as stated in the Universal Declaration of Human Rights.’

In the foreword to the 2018 edition of the book, General Brian Peddle reflects on the situation today. He writes: ‘When we consider current events in our world – the mass migration of refugees and asylum seekers, uncovered historical abuse, the need for campaigns like #metoo, gun and knife crime, human trafficking – this 70th anniversary provides an opportunity to pause, reflect and recommit ourselves to work for a better world where every person is valued, respected and protected.’

The book argues that human rights face an uncertain future, particularly due to the rise of nationalism and ‘us-first’ politics. People are, it says, questioning whether human rights is fit to be the glue that binds together the world’s laws, politics and morality. It criticises the way human rights has developed over the decades but argues that Christians should support human rights as set out in the Universal Declaration.

The General endorses this call and challenges readers to ‘personally become a defender of human rights because ours is the voice needing to be heard right now, right where you are’.