ON what would prove to be the final day of the 2013 High Council members entered the chamber with a sense of anticipation and solemnity, prepared for the sacred task upon which they were about to embark. The chosen song to open the day’s devotions included the prayer ‘Direct, control, suggest this day all I may think, or do or say’ (SASB 665).

The Chaplain, reading from the letter sent by the council at Jerusalem noted that the actions they proposed ‘seemed good to the Holy Spirit’ (Acts 15:28) and arose out of that council’s sense of harmony. The prayer for today’s work – the election of the next General – was that it too would result from the harmony that had been evident all week among the members. At the end of today’s voting, the Chaplain wanted every member to be able to say: it ‘seemed good to the Holy Spirit.’

The voting process was explained and the need for a clear two-thirds majority for a General to be elected from the first round of voting. Without further preamble the Vice-President began to call the names of the High Council members who, with quiet dignity befitting the sacred task on which they were embarking, left their seats, collected their voting paper and moved to the solitude of the voting booths to cast their vote. 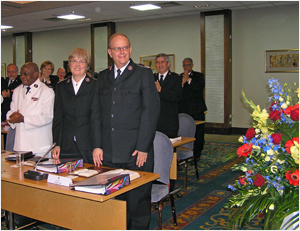 In the early afternoon on the sixth day of the 18th High Council, Commissioner André Cox was elected as the 20th General of The Salvation Army. Commissioners André and Silvia Cox knelt together at the mercy seat while the High Council members sang: ‘I would be thy holy temple’. The commissioner then confirmed that he was willing to serve.

These days have been about the work of the High Council, however the President took a few moments to express, on behalf of the Council, thanks to the secretariat – whose work is unseen but vital – and all the non-member support staff.