The Chaplain (Commissioner James Condon) read from Revelation 1:6: ‘[Jesus] has made us to be a kingdom and priests to serve his God and Father’ (New International Version), then led the council members in singing ‘Unto Thee, O Saviour-King’ (The Song Book of The Salvation Army 532), drawing attention to the line: ‘Body, soul and spirit, all in obedience to thy call.’ The verse, words and songs chosen were extremely apt as members prepared to listen as each candidate and each spouse answered a specific set of questions prepared for them.

The candidates had 24 hours to work on their questionnaire answers and speeches which meant the translators worked into the early hours of the morning to ensure every member was able to follow the proceedings clearly and to have a copy of the speeches being read.

The answers to the questionnaires were delivered without interruption and received in silence in accordance with the Orders of Procedure. After each candidate and spouse had finished there followed opportunity for members to ask clarifying – but not additional – questions.

Later in the day the candidates delivered their speeches, which were again received without comment but followed by a period of contemplative silence. 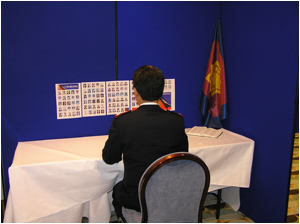 After the speeches the President (Commissioner William Roberts) adjourned the council for the night with the invitation to return in the morning to begin voting for the 20th General of The Salvation Army.

The Chaplain had the final word: ‘The eyes of the Lord are on the righteous and his ears are attentive to their prayer’ (1 Peter 3:12) he reminded council members, before closing in prayer.