IT would be easy to say that on day four of the High Council nothing happened. However, the day – falling on a Thursday – began with the members joining Salvationists internationally in the Worldwide Prayer Meeting. This was introduced by the Chaplain (Commissioner James Condon) with words of Scripture and suggested topics for prayer. The members divided into groups to enable everyone to participate and voice their prayers more easily .

Some members have attended more than one High Council but for other territorial leaders it is their first experience. What were their impressions of the High Council and all that had happened so far? Commissioner Vinece Chigariro (Kenya East Territory) – at her third High Council – felt that, so far, it had been spiritually inspiring. She said she was very aware of the spirit of unity among the members.

This was echoed by Colonels Patrick and Anne-Dore Naud (Germany and Lithuania Territory) who were attending for the first time. They had read General Larsson’s description of the workings of a High Council yet confessed it still sounded mysterious. However, they felt that the articles and the information on the Internet brought the happenings closer to all interested people. They were aware of people supporting in prayer particularly for the specific happenings of each stage. 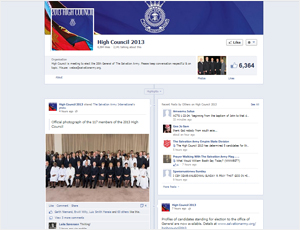 This is endorsed by the interest that is being shown in the High Council website, Facebook page and Twitter account which have been set up by International Headquarters. The video of the opening day of the High Council has been viewed more than 8,000 times and the publication of photographs on Monday night resulted in 47,655 views.

Although India and Nepal seem many miles distant from the happenings in London, Colonel Lalngaihawmi (Territorial Commander, India Eastern Territory) said that the Salvationists of her territory were very much a part of all that was happening through prayer: ‘The people are not detached in any way. At corps [churches] the High Council has been one of the main topics for a number of weeks.’

Commissioners Lalzamlova and Nu-i (International Secretary and Zonal Secretary for Women’s Ministries, South Asia) reinforced the feeling of unity being sensed in the council and their assurance that proceedings had not been rushed in any way.

Among all members there is a sense of privilege in having been called to the High Council, a feeling that they are participating in a unique event and that together they are listening to and being directed by the Holy Spirit. Colonel Lalngaihawmi summarised the experience as ‘a great privilege yet a great responsibility. We are all humble people,’ she said, ‘with a special task to fulfil.’

Tomorrow morning (Friday 2 August) the council will reconvene to continue its 'special task' when the candidates address the High Council.