FOUR men connected to The Salvation Army in Tunbridge Wells (United Kingdom Territory with the Republic of Ireland) are set to take on one of the world’s largest yacht races to raise funds to tackle modern slavery in the UK and Poland. Robert Banks, Hamish McKeown, Christopher Hunt and corps officer (church leader) Captain Graeme Smith have formed Team Matuta and will join around 1,000 other cruising boats in the Round the Island Race, circumnavigating 50 nautical miles around the Isle of Wight on 7 July. The race should last a gruelling 12 hours. (More details at www.roundtheisland.org.uk) 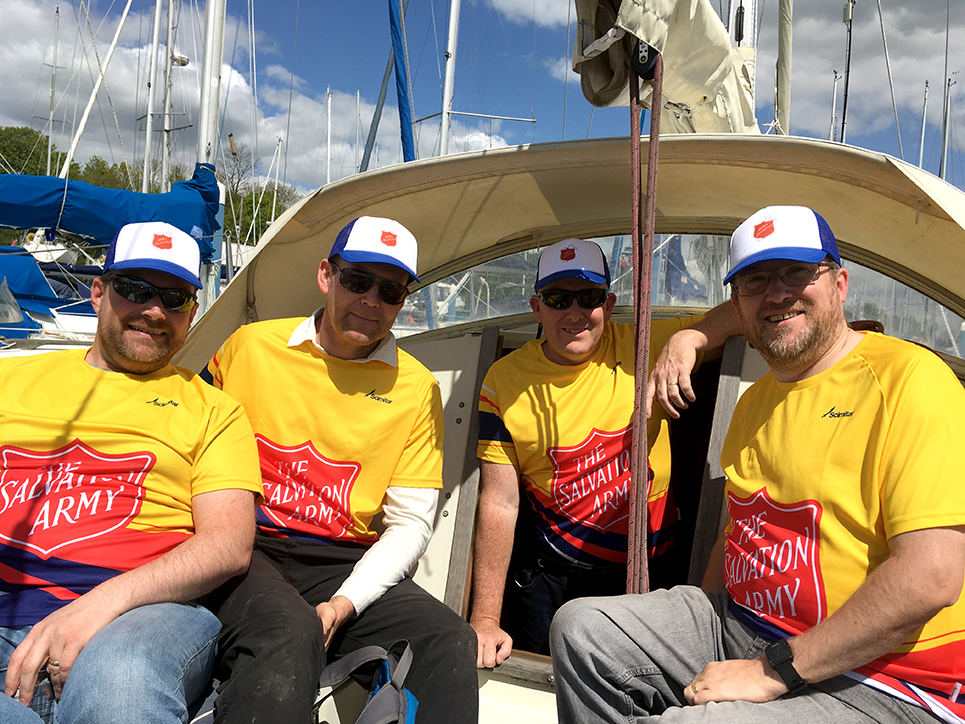 The four friends, aged between 40 and 50 years, decided to take on the challenge less than a year ago despite only one of them having previous sailing experience. Dentist Robert Banks, who owns the five-berth yacht Matuta, has been sailing for about 15 years and is Team Matuta’s skipper. He says: 'The Round the Island Race is a challenge I have always wanted to take on. My brother and sister–in-law are church leaders for The Salvation Army in Poland ... They have told me about the work involved in supporting anti-human trafficking there and I know about similar work by our organisation in the UK. The decision to form a team with Graeme, Hamish and Chris was easy really as everyone was eager to take on the race. We all knew this was the cause we wanted to raise money for.'

During their training, the team have had to battle with extreme weather conditions, including three inches of snow and ice, scorching sunshine and gale force-7 winds. Captain Smith adds: 'I first went out on the yacht in May, although Rob has been training us on land for some time now. I can’t swim, so there’s been a lot to learn to ensure we are all safe at sea as well as getting to grips with all the important nautical terms and how to control the yacht. It’s physically hard work and I have definitely got fitter through the training ... Sailing is something I have always wanted to do but never had the opportunity. I’ve recently discovered that two of my distant relatives were admirals in the Royal Navy, so you could say sailing is in my blood - some have even joked that we could form The Salvation Navy!'

The Salvation Army’s anti-trafficking work takes place on an international scale. Since July 2011 it has delivered the UK Government’s contract to manage support services for adult victims of modern slavery and human trafficking. A 24-hour Victim Referral Helpline - 0300 303 8151 (UK only) - is available seven days a week and offers immediate access to specialised support such as counselling, interpretation services, legal and immigration advice, medical and financial assistance and safe house accommodation if needed. The Salvation Army in Poland (Armia Zbawienia) has an emphasis on working with the vulnerable and needy, serving in four cities across the country. In Warsaw, supported by The Salvation Army in the UK, Armia Zbawienia runs an anti-human trafficking project which aims to protect people from exploitation when they seek work abroad.