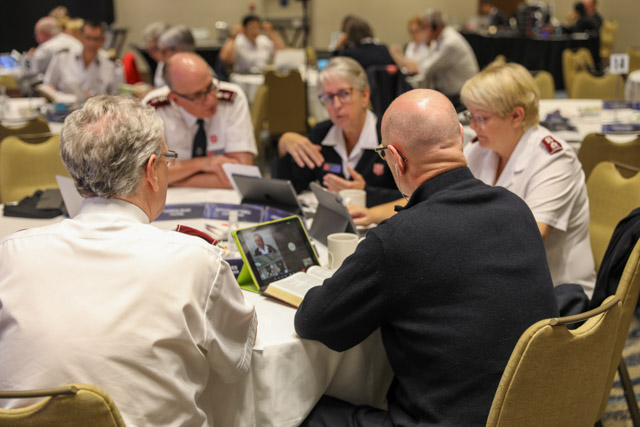 International leaders came together on Tuesday 27 September 2022 to consider ‘Our People’. The day included scrutiny of Salvation Army cadet training, the importance of middle leadership development, the role of employees in Salvation Army mission and an exploration of the place and meaning of ‘Covenant’.

In a filmed presentation, Lieut-Colonel Bishow Samhika focused on fundamental questions addressing how The Salvation Army trains its officers to make them ready for global deployment. He asked, ‘How do we ensure that officers are trained equally?’

Leaders concentrated on the political, economic, social, technological, legal and environmental influences which may impact the Army. Lieut-Colonel Samhika said, ‘The changes happening in our world today create even more need for the ministry of The Salvation Army and the officers we train must be fully equipped with skills to operate in the world.’

Stressing the need for officers to be well trained and ready to minister in a complex world, he said, ‘Officers need skills and knowledge about the world in which we live … cadets need to have a heart for God, be aware of human rights and know how to be contextually relevant.’

Noting that opportunities for training vary in different parts of the world, Lieut-Colonel Samhika highlighted the need for a flexible approach to training with enhanced use of technology. He suggested that the Army could consider deploying ‘exchange cadets’ ready to serve globally.

Delegates broke into smaller groups to consider three questions: How do we train cadets for global deployment? How do we provide more equitable training? And what will leadership do to promote cultural assimilation?

Following break-out sessions, Lieut-Colonel Anne-Florence Tursi addressed the specific needs of ‘middle leadership’. Based on the assumption that effective leaders build capacity in their organisations to ensure there is continual growth and innovation, ‘middle leaders’ are those seen as ‘closer to the action’ with the capacity to develop into future leaders.

Taken as a given that officers should display godly character, other attributes (rather than skills and competencies) deemed to be essential for future leaders include: the ability to think and act systematically, resilience, good communication skills, the ability to exert influence, a learning agility, self-awareness and courage.

Leaders broke into a further breakout session to discuss several questions such as: How do we invest in upcoming potential senior leaders equitably? What are the risks and advantages of having both territorial commander and chief secretary roles covered by nationals? What mechanisms should we put in place for accountability and support?

Examining the role of employees in Salvation Army mission, Lieut-Colonel Tursi defined three groups; those employees who are Salvationists, Christians who work for The Salvation Army and finally ‘people of goodwill’ who, while not sharing Christian beliefs, are in sympathy with the mission and aims of The Salvation Army. The Army employs professionals in some roles because specialist skills are required, for example in social work, medical practice and in education.

Lieut-Colonel Tursi said, ‘We must carefully consider the opportunities and the risks of employing people who are not members of our church or who are not believers at all, especially in sensitive areas,’ challenging leaders to consider the impact this has on the mission of The Salvation Army. She continued, ‘As the Army has grown beyond its capacity to provide the spiritual leadership for all its church ministry and social work, it will have to find ways to safeguard what is essential: the identity, mission and spirituality of this great movement. But it will also need to find ways to give a true sense of belonging to all who work alongside our officers.’ She continued, ‘Employees need the best possible orientation into Salvation Army values whilst officers need to have the best possible opportunities for developing those skills that are needed to keep our mission at the heart of all we do.’

In the following plenary sessions leaders considered a number of questions: Are there appointments that should be reserved for officers only? How do you feel about situations where ‘the shield outside the building’ is the only distinctive? And how can we give employees a sense of belonging, without impacting the morale of officers and devaluing their covenanted ministry and service?

The fourth and final session of the day addressed the question of the Salvation Army covenant. Lieut-Colonel Tursi said, ‘Covenant is one of the most important theological ideas of the Bible and is a word that implies “promise” or “pledge”. Initiated by God, his part of the pledge is to take care of his people and protect them, while their part is to serve God’s special purposes in human history.’

Lieut-Colonel Tursi concluded that, ‘Many agree that without the pledges signed by our members and officers, we would lose an essential element of the movement. The covenant distinguishes us from other churches and keeps us focused on evangelism, holiness and service. If we want to keep true to our calling as The Salvation Army, we need to unashamedly promote the covenanted lifestyle that will keep us individually and corporately ‘on track’.

Delegates considered some final questions before the session ended, including: What are some steps to strengthen the commitment to the covenant as rooted in biblical understanding? And how can we address the tension between non-covenanted and covenanted service?

These and other questions will be reported on and considered again later in the week.