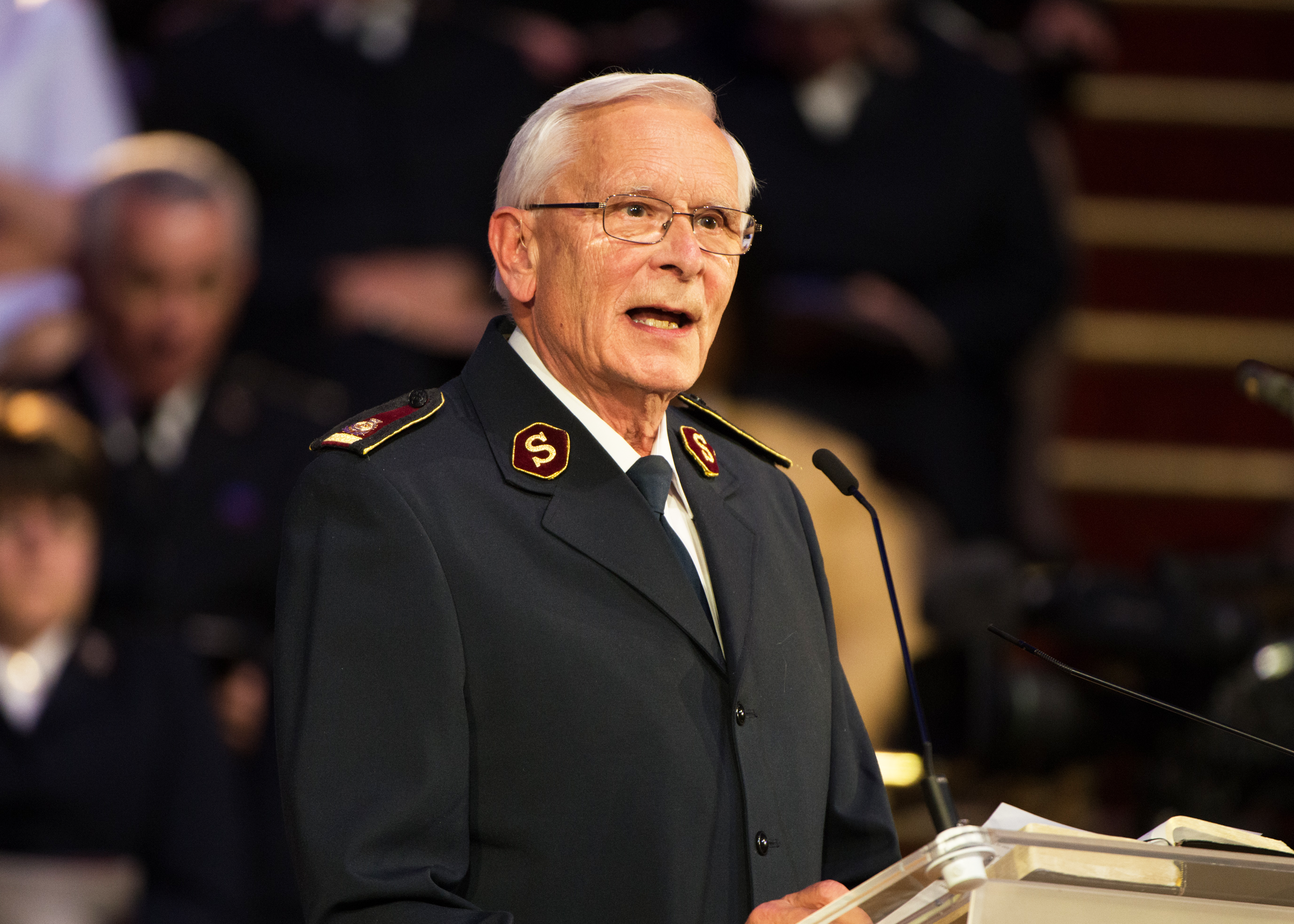 Born in Sweden on 2 April 1938, the son of officer-parents, John spent his early years in Sweden, Denmark, Chile and Argentina, and by the age of 12 he was fluent in the use of the Swedish, Danish, English and Spanish languages! Following the family’s return to the UK from service in South America, he entered the International Training College in London from his UK home corps of Upper Norwood as a cadet in the Faithful Session and was commissioned a Salvation Army officer on 17 May 1957.

His first appointment as a corps officer was at Sunderland Southwick with Washington in the north-east of England, where he served for just one year before returning to serve on the staff at the International Training College where he remained for the next seven years. He received the rank of captain in May 1960.

In May 1966 he returned to corps leadership, first at Hillingdon and then at Ealing, and it was whilst here that he married Captain Freda Turner on 5 July 1969. Together they moved to Bromley Temple Corps in May 1970, where they served for the next four years, receiving the rank of major in August 1971.

A worldwide legacy and influence

A term of overseas service commenced in May 1980 with Lieut-Colonel John Larsson’s appointment as Chief Secretary in the South America West Territory. This was followed in 1984 by a return to London and to the International Training College, where Colonel John served as Principal for the next four years.

July 1988 brought a move to International Headquarters, where Colonel John Larsson was appointed as Assistant to the Chief of the Staff for United Kingdom Administrative Planning. This role involved the complex task of researching and planning for the separation of the Salvation Army’s international and national administrations in the UK and which ultimately led to the establishing of the United Kingdom Territory with the Republic of Ireland (now the United Kingdom and Ireland Territory) in November 1990.

With the rank of commissioner, John Larsson was appointed the first Territorial Commander of this new territory. This was followed by further territorial leadership, firstly in the then New Zealand and Fiji Territory (1993 – 1996) and then in the Sweden and Latvia Territory (1996 – 1999). In October 1997 Commissioner John Larsson was appointed as a member of the Advisory Council to the General, becoming its chairman in March 1998.

In 1999, General John Gowans appointed Commissioner John Larsson as his Chief of the Staff – this appointment commencing on 1 August 1999, and it was whilst in this appointment that he was elected to serve as the Salvation Army’s 17th General.

Faithful and humble servant of God

General John Larsson served in this appointment from 13 November 2002 until his retirement from active officership-service on 2 April 2006.

It is almost impossible to quantify the worldwide legacy and influence of General John Larsson. He was a faithful and humble servant of God who shared his God-given gifts of writing and music throughout the Army world. He was the author, among other literary works, of Doctrine without Tears, The Man Perfectly Filled with the Spirit, Spiritual Breakthrough, 1929 and Those Incredible Booths.

Known extensively throughout the Salvation Army world and beyond for his collaboration with General John Gowans in the writing and production of 10 full-length musicals, the impact of General John Larsson’s contribution to Salvation Army heritage cannot be underestimated. His music, both in the context of the musicals, but also in his composition of words and music for many other songs, has had a significant spiritual impact on people of all ages. Those who had the privilege of hearing him play his own compositions at the piano will also surely not forget that experience. However, it should be remembered that the influence of General Larsson’s own character, his gentle and unassuming nature and his depth of spirituality also remains an integral part of his legacy to The Salvation Army throughout the world.

In giving thanks to God for the gift that was General John Larsson, we offer our condolences and assurance of our prayers to Commissioner Freda Larsson, to their sons Karl and Kevin and to their wider families. To them we offer these words, set to beautiful music by General Larsson himself, and based on Philippians 4:6-7.

The Lord is near; have no anxiety,
Make your requests known to God in prayer.
Then the peace of God,
Which is beyond our understanding,
Will keep guard o’er your hearts and thoughts.

We pray that the experience of this truth will surround and enfold Commissioner Freda Larsson and her family at this time.