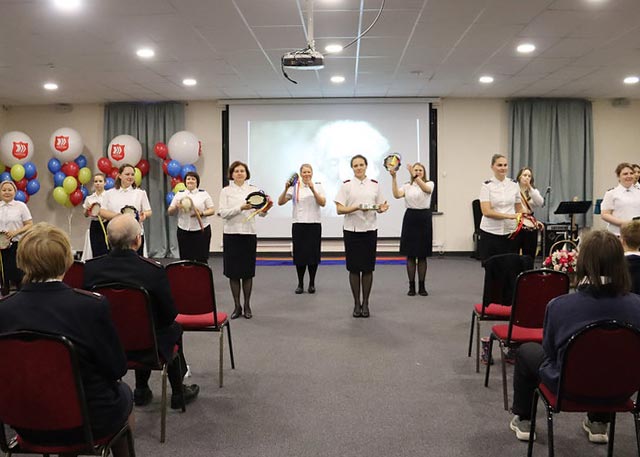 GENERAL Brian Peddle and Commissioner Rosalie Peddle (World President of Women’s Ministries) were guest leaders as The Salvation Army celebrated the 30th anniversary of work restarting in Russia after the fall of the Soviet Union. The international leaders remained in London and shared online but officers, soldiers, friends and volunteers were delighted to have the opportunity to get together – at a location around 35 kilometres outside Moscow – and celebrate the anniversary of The Salvation Army returning to Russia.

A large-screen meeting space allowed the General and Commissioner Rosalie to share their Bible messages and words of encouragement. Every day, reports from the congress were shared online and through social networks, meaning that people across Russia and further away could keep up to date with what was taking place. A video of the congress is being prepared and will be distributed to Salvationists across the command.

After officers councils, a festive concert was held to glorify God for his care during the past 30 years. There were times of reminiscence but also a focus on today’s needs and consideration of the places where The Salvation Army might raise its flag in the future. The General and Commissioner Rosalie Peddle shared words of welcome and congratulation.

The next day was devoted to the development of The Salvation Army’s mission in Russia. Three meetings, each of which focused on a theme from the General’s Call to Mission – ‘Be Ready’, ‘Be Engaged’ and ‘Take Responsibility’ – resonated well with those present.

At the Sunday morning worship meeting, Commissioner Rosalie shared a heartfelt testimony. She called on her listeners to put their hopes only in the Lord, who will always be with them.

The General called on people to be in tune with the Word of God, ready for any changes and open to the Holy Spirit. Times change, he admitted, and the way that things happen in the world may become hard to understand, but constant communication with God, prayers and service will advance the mission of The Salvation Army in Russia and around the world.

There was a good response to this celebration of God’s ongoing love. Some people took their prayers to the mercy seat and others shared testimonies about his work in their lives.